Wisconsin’s offensive balance is a goal and challenge for Minnesota. 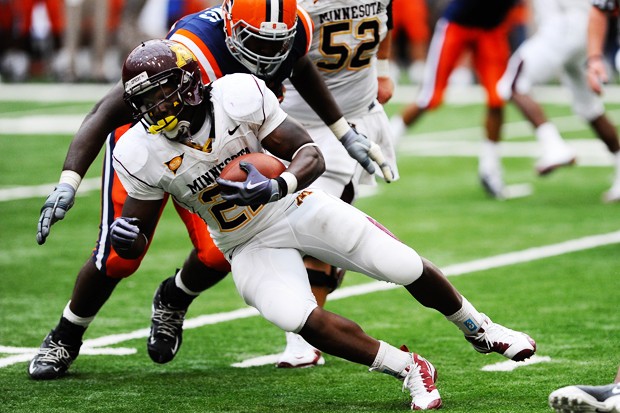 No special motivation is needed for the Gophers as they prepare for SaturdayâÄôs game against Wisconsin. The Badgers have won the last five games and 12 of the last 14 meetings of the most-played rivalry in the Football Bowl Subdivision . No player on the current Gophers team has ever defeated Wisconsin. Despite all the contempt the Gophers might feel toward their rivals on the opposing sideline, the Gophers covet what the Badgers have âÄî and thatâÄôs more than Paul BunyanâÄôs Axe. Through four games this season, the Badgers seem to have found the balance and consistency to which the Gophers aspire. Minnesota (1-0 Big Ten, 3-1 overall ) made a step toward its goals by rushing for a season-high 166 yards last Saturday, but Wisconsin (1-0, 4-0 ) has topped that total each of the last three weeks . âÄúAny offense is looking to be the best in their conference and have stability, and be able to run whenever they would like and throw whenever they would like,âÄù junior quarterback Adam Weber said. âÄúOn offense, weâÄôre looking to run the ball with success and pass the ball and just move and put up points.âÄù Those tasks have given Wisconsin little trouble in home games against Northern Illinois, Fresno State, Wofford and Michigan State . The Badgers are second in the Big Ten in total offense, lead the Big Ten in red-zone efficiency âÄî scoring on each of their 16 trips inside their opponentsâÄô 20-yard line âÄî and have outscored their opponents 83-34 before halftime . Led by sophomore running back John Clay , who is second in the Big Ten in rushing , the Badgers have rushed for 198 yards per game, which ranks second in the conference. Compare that to the Gophers, who are last in the Big Ten in rushing yards and total offense . That will certainly need to change for Minnesota to compete in the Big Ten. âÄúI want us to be able to possibly win left-handed, and what that means is, if they take away your strength, you can win with the other phase of the game âÄî running or passing,âÄù said Gophers head coach Tim Brewster , who seeks his first victory in seven trophy games . âÄúThereâÄôs very few teams in the country that can do that.âÄù The Badgers might be one of them. They have rushed for at least 150 yards in every game and lead the Big Ten in passing efficiency. They are also second in the conference in third-down conversion rate âÄî the Gophers are last âÄî and are tied atop the Big Ten in turnover margin (+1.25 per game) . In a victory over Michigan State last Saturday, the Badgers scored 21 points off of Spartans turnovers and held the ball for more than 37 minutes. Badgers junior quarterback Scott Tolzien threw four touchdown passes against Michigan State to earn Big Ten Offensive Player of the Week honors . Tolzien, who is in his first year as a starter , was in the same recruiting class as Gophers junior safety Kim Royston . Royston, who attended Cretin-Derham Hall High School in St. Paul , played two seasons at Wisconsin before transferring to Minnesota. âÄú[Tolzien] has always been a hard worker behind the scenes,âÄù Royston said of his former teammate. âÄúHe did a lot of one-on-one work with the younger receivers, and now it looks like itâÄôs paying dividends.âÄù Part of that success is due to the Badgers offensive line that has allowed just two sacks this season . That might not be so astounding when considering that the average size of the BadgersâÄô five linemen is 6-feet-6 inches and more than 320 pounds . âÄúTheyâÄôre huge up front âÄî thatâÄôs what theyâÄôre known for, and we think weâÄôre pretty good up front, too,âÄù said senior defensive tackle Eric Small , whose three sacks are tied for the Big Ten lead . The defensive line will be even more challenged without senior defensive end Cedric McKinley , who was suspended for two games for violating team rules and policies. âÄúAs much as weâÄôre going to miss him, one guy is not going to break this defense,âÄù Small said. âÄúThe next guyâÄôs got to step up.âÄù That guy is senior defensive end Anthony Jacobs , who recorded a sack at Northwestern and has played in every game this season . He will not be alone, however; the Gophers have also used seniors Raymond Henderson , Derrick Onwuachi and redshirt freshman D.L. Wilhite at defensive end this season. âÄúWe can all rotate, and we rely on each other that if we need a break, we know the next guy behind us âÄî or whoever else is going in âÄî can do the job,âÄù Small said. The smooth operation of the Gophers defense has come under two coaches who were once employed at Wisconsin. Co-defensive coordinators Kevin Cosgrove and Ronnie Lee were on the Badgers staff for 14 and three years, respectively. LeeâÄôs first year (2003) at Wisconsin was CosgroveâÄôs last season with the program. Lee has been with BrewsterâÄôs staff since 2007. Cosgrove is in his first year at Minnesota. âÄúRonnie and Kevin have really worked well together, and I think them being familiar with one another coming in has certainly helped,âÄù Brewster said. Lee, Cosgrove and Royston only add spice to the 119th Minnesota-Wisconsin showdown and first Big Ten game at TCF Bank Stadium . The Gophers have tried to set aside the emotions and intrigue by focusing on what game week is all about: getting ready to play their best on Saturday. âÄúThatâÄôs all you can do, I believe, as a football team: prepare to win and expect to win âÄî truly expect to win,âÄù Brewster said. âÄúHave a tremendous belief and confidence in each other to go out and make it happen.âÄù