Tender is the night 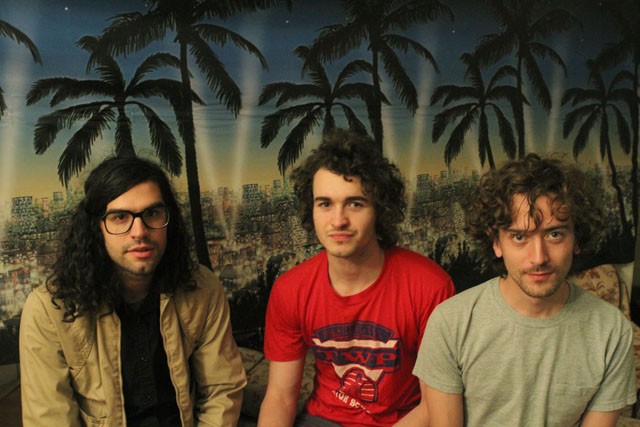 The contemporary music landscape is draped with bands of easily definable parameters. ItâÄôs not just that the casual listener prefers the recognizable, the familiar and, hence, easily describable, itâÄôs also just a result of progress. Popular musicâÄôs dense layers of historical sediment have formed an artistic bedrock from which an actâÄôs past influences are often superficially repeated rather than uniquely metamorphosed. Minneapolis trio Night Moves is one of the hard-to-find exceptions to this rule.

âÄúWe always used to get these comments like âÄòHigh school dance band getting crazy,âÄôâÄù**** Ritsema said. âÄúWe kind of wanted to get away from that bit of being silly but still not making something that was too serious.âÄù

Simply put, The Battle Royale had a stylistic weight. While Night Moves undoubtedly veers away from the siren guitars and epileptic drum patterns of the former project, Ritsema and Pelant remain productively meticulous.

âÄúColored EmotionsâÄù was actually written and recorded a year ago. Their maddening attention to detail amid the tracking and mastering processes naturally augmented both expenses and feasible release times.

âÄúThe mentality of tracking leads to perfection,âÄù Pelant said. âÄúIf youâÄôre going to do everything piece by piece, you might as well have everything spot-on.âÄù

The result of such thoroughness has led to a record that exceeds its puzzle-piece studio origins. The record is defined by spacious wall-of-sound synchronicity. The well-gelled trioâÄôs material doesnâÄôt play like a multi-tracked recording. ItâÄôs not just their methodical interest in the subtle nuances. ItâÄôs their ability to conjure this overwhelmingly organic atmosphere synthetically.

ThereâÄôs a grounded sensuality in the highs and lows of PelantâÄôs voice, and it somewhat functions as the emotive crux of Night MovesâÄô brand of buoyant guitar twangs and folk-tinged lyricism. What is even more fascinating is their ability to subtlety juxtapose electronic instrumentation against these greater pastoral elements. There is a diminished artificiality through this melding âÄî one that creates a disarming warmth and history to their compositional technique amid these threads of modernity.

âÄúThereâÄôs a lot of these electric bands that we get paired with, like synthy dance bands,âÄù Ritsema, whose main weapon is an old Farfisa organ, said. âÄúWe didnâÄôt want to use crazy Korgs and that kind of stuff.âÄù

The diminished presence of these electronic effects also gives Night Moves a subtle, albeit recognizable, sex appeal. The ebb and flow of both guitar progressions and PelantâÄôs alluring vocal register still seems to draw from those hot-and-bothered sentiments of The Battle Royale. However, itâÄôs not something the band sees as a conscious effort.

âÄúI feel it at the live shows,âÄù bassist Mickey Alfano said. âÄúI wouldnâÄôt say I consider it sexy, but the way I move to it when IâÄôm playing is something I notice.âÄù

It could also simply stem from the aural comfort that radiates from Night MovesâÄô songs. With an interest in exploring a Curtis Mayfield-brand soul on their next record  âÄî one they hope to get out before the end of 2011 âÄî and an admitted interest in Night Moves-branded condoms, the amorous allure may be augmented before itâÄôs diminished.

Maybe itâÄôs just a simple reality that Night MovesâÄô hard-to-pin-down aesthetics tower over a local environment where stylistic association can be granted higher pedigree than quality. And there is something thrilling about that.