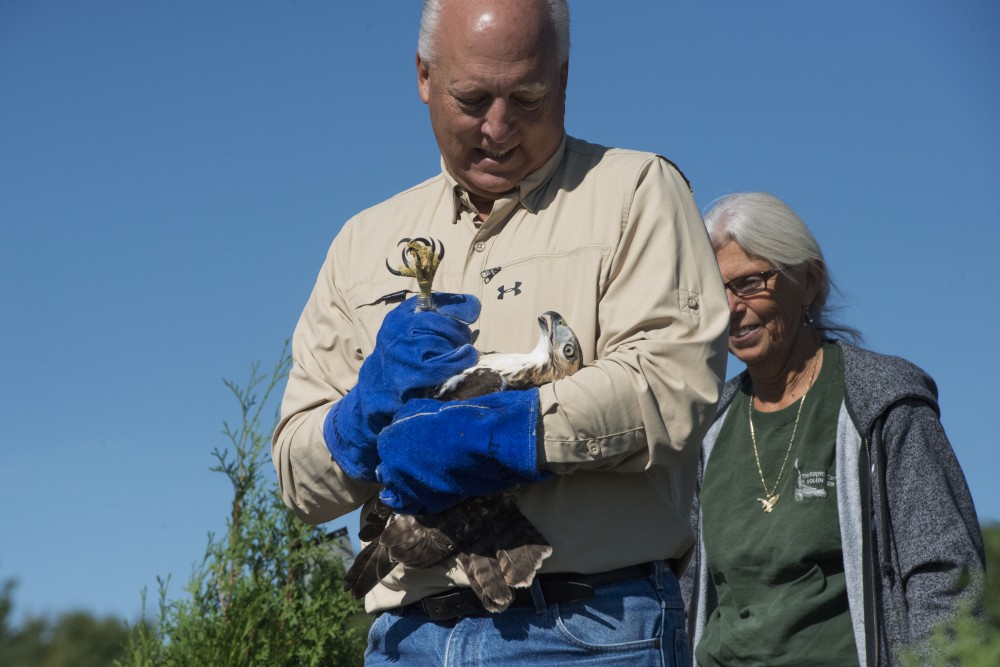 A male red-tailed hawk is released by CNC volunteers Jeff Carlson and Stacy Carlson on Saturday, Sept. 22. The hawk had been seen hitting multiple windows in Minneapolis before being admitted to the University's Raptor Center.

A bald eagle stares out at a camera with vivid yellow eyes from his place on a technician’s table. Careful gloved hands hold the raptor in place while Juli Ponder, executive director of the University of Minnesota’s Raptor Center, is recorded examining its head and chest, extending each wing to check for any fractures or signs of trauma.

Although this hands-on experience is not something a typical grade school student might see in their science classroom, the Raptor Center is looking to make this kind of behind-the-scenes learning more commonplace.

As part of a collaboration between the Raptor Center and UMN Extension, a new project called Outdoor Investigations in the STEM Classroom (OISC) is working to help science teachers incorporate online modules into their curriculum.

Although students won’t be interacting with larger predatory birds in person, the team’s videos allow students to role-play as scientists and veterinarians treating injured birds within the Raptor Center.

In one module, using an injured bald eagle as a “patient,” students are guided through a step-by-step process of diagnosing, treating and releasing the bird. Students also get the chance to write a scientific report and analyze real data collected by the Raptor Center.

Additional modules place the student in the role of a wildlife researcher who examines the causes of lead poisoning in eagles. Another guides them in making their own outdoor investigative project.

Though the modules are available to the public, the team plans to host two summer training programs to help teachers integrate OISC into their classes. They hope to have about 40 teacher participants.

Funded by a $315,000 grant from the Cargill Foundation, the project aims to work with schools with high rates of free or reduced lunch, with a focus on schools in North and West Minneapolis.

For Cara Rieckenberg, program coordinator for the Robbinsdale School District in Northwest Minneapolis, the OISC initiative comes at a perfect time.

Rieckenberg said her district is looking for ways to embed new science curriculum into their classes.

The project appeals to a learning that exists beyond textbook memorization, she said. Through the modules, students can see that science can be applied in many different ways and contexts, which will hopefully “bust the myth” of scientists existing as only “men in lab coats,” she said.

“I really try to showcase and provide multiple opportunities for our students to see STEM in action … so that they can make a connection on how it could apply to their life,” she said.

By engaging students with the environment at a young age, Rieckenberg said the program students will hopefully develop a sort of environmental literacy that will give them more appreciation for the natural world.

“Ultimately what I would like to see is that it encourages more questions and observations …  with a critical lens,” she said. “Regardless of what our kiddos go into, I want them to be questioners and thinkers and problem solvers.”