No. 2 Minnesota mixed things up offensively and found success. 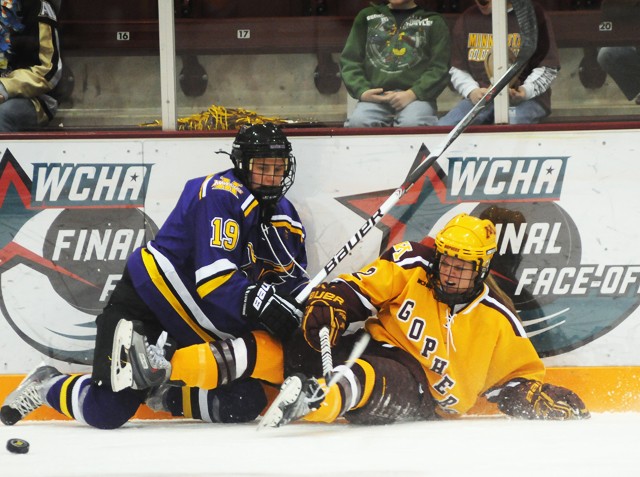 A few small changes can often make a world of difference, and it looked like it did for the No. 2 Minnesota womenâÄôs hockey team this weekend. After struggling to put up big offensive numbers in recent weeks, Minnesota head coach Brad Frost changed up a few lines this weekend against Minnesota State-Mankato with favorable results. The Gophers (21-3-4 overall, 17-2-3 Western Collegiate Hockey Association ) topped the Mavericks (4-17-5, 2-15-5), 4-2 Friday and 4-1 in the Saturday matinee. FridayâÄôs game saw the Gophers get off to a slow start, as Minnesota State-MankatoâÄôs Ashley Young scored at 11:12 in the first . The Gophers wasted no time responding as senior Chelsey Jones knocked in the puck just 13 seconds later. âÄúWe definitely have been working on responding,âÄù Jones said. âÄúOur team has had a slow start to a lot of the games, and the way we respond is how we want to set the tone.âÄù Not to be outdone, the Mavericks came back with another goal, as Minnesota State-Mankato freshman Lauren Smith floated the puck over goaltender Alyssa Grogan . The Gophers went into the locker room down 2-1 after one period. The Gophers struggled right away and were outshot 4-9 in the first period. Minnesota head coach Brad Frost said he hoped the slow start had to do with the unfamiliarity of the new lines. âÄúWe started fairly slow, but I was impressed with just how our team came back in the second period and really started getting pucks to the net,âÄù Frost said. âÄúYou could see they were getting a little more comfortable with each other as line mates.âÄù The comfort showed in the second period as the Gophers rattled off three goals. Junior Emily West slid the puck past Mavericks goaltender Alli Altmann in the middle of a crowd to tie up the game at two. Freshman Sam Downey also scored in a scrum in front of the net, which would be the eventual game-winning goal. It was only DowneyâÄôs second goal of the season. Fellow freshman Becky Kortum added her third goal of the season, knocking it in from the bottom of the circle after forcing a turnover. The new line, consisting of Terra Rasmussen, Brittany Francis and Sarah Erickson, seemed even more comfortable Saturday, with the three combining for seven points in the 4-1 victory. Francis had a big night, tallying four points, including the first goal of the game . The Mavericks answered back with a goal from Smith at 7:37 in the second. But West put the Gophers ahead with a power-play goal just two minutes later. The goal marked the 99th point of her career. âÄúItâÄôs just a cool feat to think about with the team I have behind me,âÄù West said. âÄúItâÄôs more of a celebration for the team âÄ¦ and what IâÄôve been through with them.âÄù Rasmussen and sophomore Anne Schleper added goals in the final period. Schleper, who turned 20 on Saturday, s et up from just inside the blue line and fired the puck past Altmann untouched. Contributing in a big way was goalie Grogan who, after sitting behind freshman Noora RÃ¤ty for most of the year, had 45 saves over the weekend to give her seven wins on the season. After the first period of FridayâÄôs game, Grogan settled down and only allowed one more goal the rest of the weekend. âÄúIn my position, I havenâÄôt got too many shots to prove myself,âÄù Grogan said. âÄúIâÄôm happy that I can kind of put it behind me and keep playing.âÄù Another point of emphasis after the GophersâÄô sweep of North Dakota last weekend was keeping up the intensity for the entire game, which the Gophers did Saturday. âÄúFrom the drop of the puck, I thought we came out and played very well,âÄù Frost said. âÄúOverall I thought the energy was good; the effort and the execution was back to where we needed it to be.âÄù With the sweep, the Gophers keep a healthy lead over No. 5 Minnesota-Duluth . The Gophers will head to Duluth next weekend for a pivotal matchup with their rival , with the opportunity to clinch the WCHA regular season championship.