Protesters come out for Obama’s visit

Both the College Republicans and the Anti-War Committee protested at the president's rally. 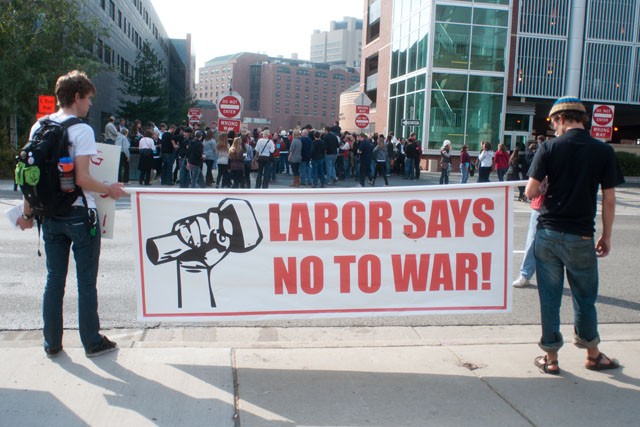 Anti-war protesters, John Mason, right, and Henrie, who refused to give his last name, protest at the Obama rally along University Ave SE.

University Avenue acted as an ideological divide when President Obama came to the University of Minnesota on Saturday. In the hours leading up to the rally, protestors lined the sidewalks on one side watching as supporters filed into the University Field House across the street. Separated by a stretch of concrete, two groups of protestors broadcast their messages critical of the president until they left their posts around 2 p.m. Students from the University College Republicans group congregated at 12:30 p.m., holding signs and wearing T-shirts to voice their support for Republican candidate Tom Emmer, and to criticize Obama. The 20 or so students conversed quietly among themselves, and rarely fired back at hecklers passing by. âÄúWeâÄôre not trying to be here to be rude, disrespectful or rambunctious,âÄù sophomore Jackie Caston said. âÄúWe just want to show that we donâÄôt agree with the policies.âÄù The quiet protest was just one of a litany of events Minnesota College Republican âÄôs Executive Director Jake Loesch has set up and attended in the past months. HeâÄôs been traveling to the other 16 chapters on university campuses throughout Minnesota as the election nears. âÄúMark Dayton has got the wrong message for Minnesota,âÄù Loesch said. âÄúWe need some fiscal conservatism, and thatâÄôs just not what we see.âÄù Surrounded by college-age students, the middle-aged and jolly Jim Engebretson anchored the group as he waved a âÄúDonâÄôt tread on meâÄù flag. âÄúI doubt if weâÄôre going to change opinions of people going into the Field House, but there are a lot of people driving by,âÄù he said. Just steps away, a smaller group of protestors from the Anti-War Committee used handmade banners and a megaphone to get the attention of those waiting in line. âÄúWeâÄôre here to say, âÄòYou said you supported change,âÄô âÄù Meredith Aby said. Aby was one of six Minneapolis anti-war activists whose homes were raided by the FBI on September 24 . âÄúI am still kind of shocked and outraged that I personally was attacked for my activism,âÄù she said. The group chanted over the megaphone and handed out leaflets to call for an end to the war in Afghanistan, and for the president to halt the investigation of the six AWC members. âÄúWe want to educate Obama supporters, because we believe that if we educate his supporters, we can move him forward,âÄù she said.