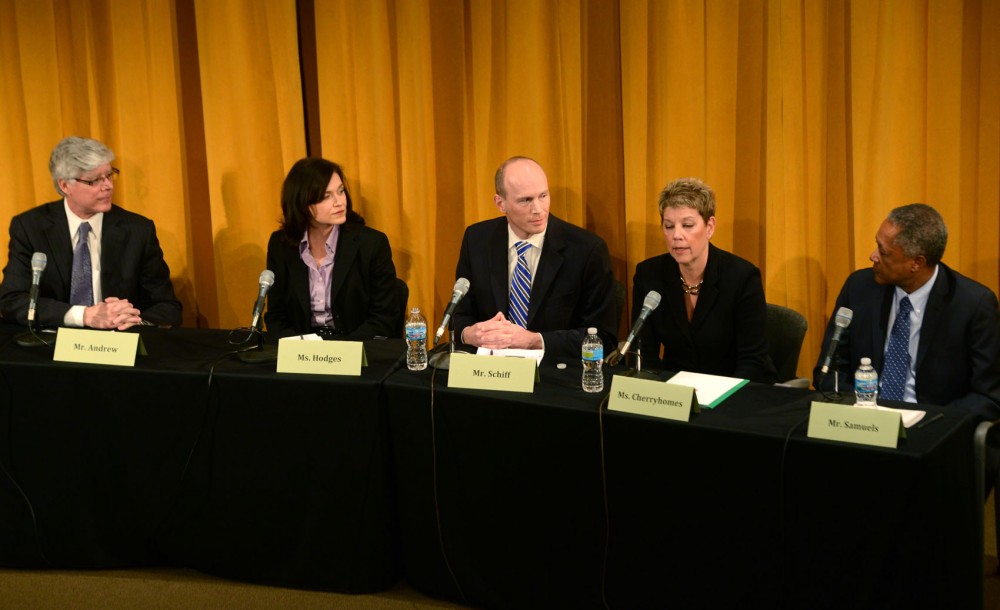 The five Democratic-Famer-Labor Party candidates for Minneapolis mayor debated for the first time Wednesday in front of a packed Cowles Auditorium at the University of Minnesota.

The five DFLers are in a race of their own for the party’s endorsement in mid-April. Independent candidate Cam Winton was in attendance but was not invited to participate in the debate moderated by Larry Jacobs, director of the Center for the Study of Politics and Governance at the Humphrey School of Public Affairs.

Being from the same party, candidates viewed most issues similarly, but their solutions varied, including funding for the forthcoming Vikings stadium, a topic that drew the most disagreement.

Hodges and Schiff were among six council members who voted against the narrowly approved stadium, and both reiterated their views Wednesday.

The state planned to finance its $348 million share of revenue through charitable gambling, but recent estimates have shown electronic pull tabs are bringing in much less than expected.

Schiff said no one was a bigger stadium opponent than him because he’s fundamentally against using public money to finance a stadium for a “billionaire out-of-state owner.”

Schiff said he would oppose asking Minneapolis residents to cover the state’s shortfall.

“It’s the Minnesota Vikings, not the Minneapolis Vikings,” he said.

Hodges also said she would say “no” as mayor if the state asked Minneapolis residents to pay more for the stadium.

“The state side of the financing is not [strong],” she said.

While Schiff and Hodges focused on the cost, the other three candidates highlighted the jobs the stadium plan will create.

Samuels, who was among seven on the council who voted for the stadium, said he has no regrets about his vote.

“This was the best opportunity for the creation of employment for union workers,” he said.

Andrew and Cherryhomes both disagreed with the stadium’s location and financing plan but said the job creation will be significant.

“It is a job creator for the residents where I live, in north Minneapolis,” Cherryhomes said.

Andrew said the stadium will be a jobs machine.

“It is utterly inconsistent for candidates saying they’re job creators being against building stadiums,” he said.

The candidates had their first chance Wednesday to distinguish themselves side-by-side.

Candidates had a minute at the beginning and end of the debate to tout their merits, plus 90 seconds to respond to questions.

He described himself as an environmentalist and brought up green initiatives on multiple occasions, including the work he put into converting the trash-filled Midtown trench into the Midtown Greenway.

“When other people were looking at the Greenway trench, they were seeing whiskey bottles and syringes and vagrants and crime,” he said. “When I looked at it, I saw a park.”

Samuels passionately described his stance on public safety and education in north Minneapolis — an area he represents on the City Council and one that has had some of the city’s worst crime.

“We can become the safest city in the United States of America,” he said before promising to make that a priority if elected.

He also said his experience as an immigrant — he came to the U.S. from Jamaica 43 years ago — gives him a different perspective on issues.

Cherryhomes, who was City Council president from 1994 to 2002, said she was the only candidate with actual experience creating housing. She also touted her job creation abilities.

“I know how jobs are created, I know how to do it and I have the relationships to get it done,” she said.

Hodges, who chairs the city’s Ways and Means Committee, said the budget and tax work she’s done on the council might not make for the most interesting conversation piece but is still important.

She said she’s worked harder than anyone on alleviating property tax burdens in the city and that her work on pension funds saved the city millions.

“Taking on the closed pension funds — and winning — was one of the biggest moments of my career on the council,” she said.

Schiff mentioned his pro-small business reputation and platform a few times during the debate.

He said he helped bring micro-breweries into the city by lifting prohibition-age restrictions that were in place.

“We should be investing in small businesses and demanding accountability in our tax dollars,” he said.

Independent candidate Winton criticized the Humphrey School’s decision to exclude him because he’s not a DFLer.

“It was unfortunate that the Humphrey School only represented one side of the mayor’s race today,” he said.

Eric Schwartz, the dean of the Humphrey School, said in an opening address that Larry Jacobs would be meeting one-on-one with Winton in the coming weeks, and the school wants to foster discussion among all political affiliations.

“We want to play a role here in convening discussions with all parts of the political spectrum,” he said.

The League of Women Voters will host the next debate April 3 in south Minneapolis. All six candidates will participate.