A survey reported significant drops in revenue and full-time employment. 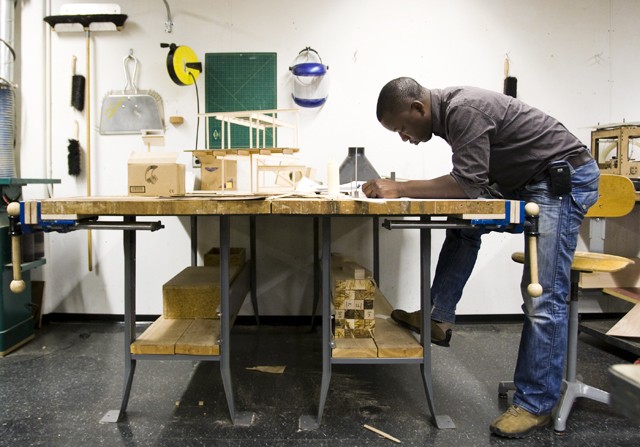 University architecture senior Lauren Weingartner said her teachers are honest about the dire state of her intended profession. Weingartner, president of American Institute of Architecture Students of Minnesota is one of the roughly 500 University students studying to enter an industry experiencing a downturn more severe than any it has faced in the past 40 years. âÄúItâÄôs a great profession. Obviously, right now itâÄôs not the easiest one to be in, but itâÄôs fun and itâÄôs rewarding,âÄù Weingartner said. âÄúStay with it and ride it through. I mean, thatâÄôs the hard part. What are you going to do?âÄù The Minnesota AIA issued a survey to architecture firms in Minnesota to exactly identify the problems the profession is facing. About one-fifth of the firms responded, reporting that from 2007 through 2009 they experienced a 24 percent decrease in revenue and a 21 percent decrease in full-time employment âÄî a significant drop compared to other professions. The survey is part of an overall effort by the Minnesota AIA to make firms more successful. The results of the study have not yet been published, and the Carlson School of Management will be reviewing the survey to provide input on the AIAâÄôs plan. Projects commissioned for industries like health care, higher education and government have not declined as much as those in housing, commercial, retail and office buildings, said Stephen Fiskum, chief operating officer of HGA Architects and Engineers. HGA, which employs approximately 280 people in its Minneapolis office, had to cut roughly 8 percent of its workforce as a result of the economy. Fiskum said other firms were hit harder than HGA, which designed the Scholars Walk and the addition to the Weisman Art Museum. HGA will, however, still be hiring interns, which Weingartner said reflects an industry-wide support for students that has been especially helpful. Although Weingartner and her classmates have reason for concern, recent graduates are in a tougher position because they donâÄôt have time to wait out the storm, she said. Some are returning to school to earn additional degrees in other areas, said Jim Lutz, a University architecture lecturer. âÄú[If I were a student] I would feel better if I was coming out of school two years from now than this spring,âÄù Lutz said. âÄúI think weâÄôve got a good year to two years before we start seeing substantive recovery in the profession.âÄù Despite the employment troubles, enrollment in the UniversityâÄôs architecture school has increased incrementally since at least 2006, and the architecture degree program is the most popular in the College of Design. Demand for available spaces has also increased, said Lee Anderson, interim head of the School of Architecture. Administrators are weighing options to expand the school, which is housed in Rapson Hall and the 1701 University Avenue Southeast classroom building, by determining the amount new space would cost. Lutz said the dire employment numbers have changed the way he teaches his classes, as well. The industry is especially responsive to the economy and will be quick to improve when recovery is more apparent, Anderson said. âÄúArchitecture is by definition an optimistic art,âÄù Lutz said. âÄúWe build today because we believe there is going to be a need for what we do in the future.âÄù