Six of 14 pitchers who have made appearances this year were freshmen. 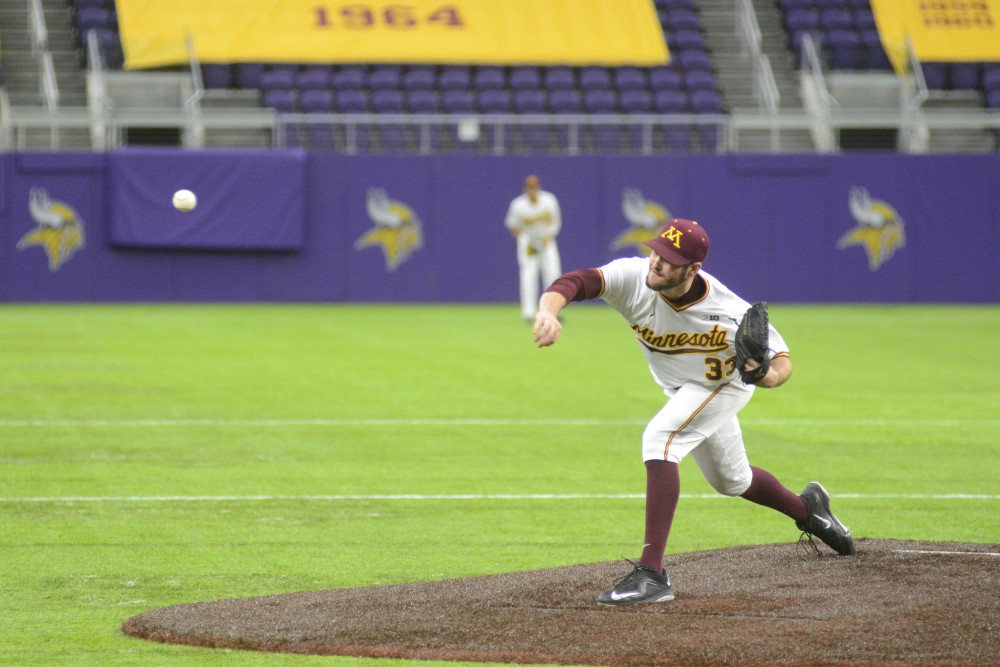 Gophers pitcher Toby Anderson throws a pitch during a game against Iowa on Sunday, March 5 at U.S. Bank Stadium.

Gophers baseball head coach John Anderson knew before the season started that one big question mark ahead of his team was the pitching staff.

“We’re going to need a lot of people to step up for us when you lose six pitchers like we did,” Anderson said in February. “I’m confident that the players that are returning are making the next step in their development.”

Now that the Gophers have the first couple weeks’ games under their belt, the bullpen is starting to solidify and a lot of freshmen pitchers are adapting to the college game.

Through the first 13 regular season games, Minnesota’s true freshmen pitchers have gone almost 39 percent of the innings, and six of 14 pitchers who have made appearances on the mound this year have been first-year players.

There have been triumphs for the freshmen pitchers this year. Max Meyer, who also plays designated hitter and had two hits in Tuesday’s win over Nebraska-Omaha, got his third save of the year when he pitched two strikeouts in the ninth inning.

“It’s nice. You can throw him in the DH, and then use him later to pitch,” catcher Eli Wilson said. “He’s just a great athlete. He can do a lot of things for you out on the field.”

“He’s quite composed for a freshman in college, in my opinion,” Anderson said. “Not too much bothers him, he’s able to move on pretty quickly to the next pitch, and he’s pretty solid mentally and emotionally.”

Joshua Culliver, who has the most innings pitched by a freshman at this point, allowed two runs and three hits in the first inning against the Mavericks, but he came back to pitch four scoreless innings.

However, there have also been outings where the freshmen have struggled. Sam Thoresen, in his first game pitching in college baseball, hit four batters and allowed four runs before getting pulled in the loss to Georgia State.

“[Thoresen] had a tough outing the first time of the year,” Anderson said. “Those [older] guys were awesome in picking him up, and letting him know that, ‘we’ve had outings like that in our careers when we started out.'”

One of those more experienced pitchers, Jeff Fasching, a junior, had an 11.25 ERA on eight innings pitched when he was a freshman. Fasching said he remembers what the older guys would tell him when he struggled, which he still uses as advice today.

“Failure was really good for me, and they told me that,” Fasching said. “I know it sucks right now, but in the end, later in your career, this failure that you’re experiencing … is going to be huge for you.”