‘Special forces’ to be reckoned with

Thanks to extra emphasis, the special teams are making big plays. 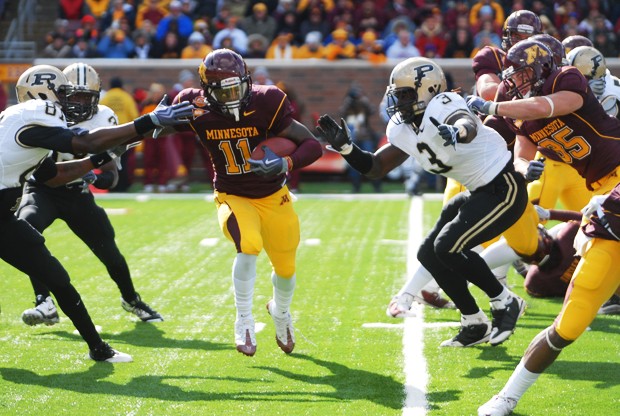 Gophers head coach Tim Brewster gives them the title âÄúspecial forces.âÄù Halfway through the season, it is clear that they are both special and a force. The Gophers special teams have been among the best in the country. Solid kicking, punting, and returning are a big part of the reason the Gophers are 4-2 (2-1 Big Ten). âÄúOur special teams have been nothing short of spectacular,âÄù Brewster said. SaturdayâÄôs 35-20 victory over Purdue highlighted the unitsâÄô impact. Minnesota forced and recovered a fumble on a kickoff return, blocked a field goal and returned it for a touchdown and set up the offense with great field position all game . Redshirt freshman linebacker Keanon Cooper , who made a career-high 10 tackles on Saturday , said the Gophers special teams are probably one of the teamâÄôs strongest points. âÄúOur special teams have been a great part of our success so far,âÄù said Cooper, who forced a fumble on a Boilermakers kickoff return that led to a Minnesota touchdown on Saturday. The Gophers scored again when senior linebacker Lee Campbell blocked a third-quarter field goal and senior cornerback Traye Simmons returned the loose ball to the end zone. The touchdown on a return of a blocked field goal was the first for Minnesota since Oct. 21, 1989. âÄúThose things donâÄôt happen by accident,âÄù Brewster said. âÄúTheyâÄôre happening because of the way we work at it.âÄù âÄúWe practice it every week, every day, and it’s good to see practice go perfect,âÄù Simmons said. Indeed, practice is the best explanation for the GophersâÄô success on special teams this season, said sophomore kick returner Troy Stoudermire , who ranks second in the Big Ten and 17th nationally with a 28.3-yards-per-return average. âÄúWe have so many hours that we’re putting in on special teams that we can’t go wrong,âÄù Stoudermire said. âÄúWe work so hard on it that we can’t make mistakes.âÄù Stoudermire is usually responsible for giving the Gophers offense good field position (he led the Big Ten and was sixth in the country with over 1,000 kickoff-return yards last season), but he helped on the other side of the ball on Saturday. Stoudermire made his first two tackles of the season in punt coverage . That helped Minnesota limit Purdue punt returner Waynelle Gravesande to 2 total yards in punt returns despite an 11-yard return average entering Saturday . Minnesota has consistently succeeded in the field position battle because of strong punting. The Gophers are third in the Big Ten and 13th in the country in net punting, as they displace their opponents by nearly 40 yards per punt . Senior Blake Haudan assumed punting duties after true freshman punter Dan Orseske was diagnosed with mononucleosis, more commonly known as mono, the night before MinnesotaâÄôs game against California on Sept. 19. Haudan made his collegiate debut against the Bears and has punted 19 times in four games. He has pinned opponents inside their 20-yard line on eight of those punts (he has not yet kicked a ball into the end zone), and his 40.6-yards-per-kick average ranks seventh in the Big Ten . Haudan had a 48-yard average on his first three punts against Purdue before he made two kicks into the wind that each traveled less than 25 yards each. Brewster said Haudan didnâÄôt struggle as much as Boilermakers punter Chris Summers , who saw one of his kicks travel just 7 yards. Haudan is not the only upperclassman on special teams to play well in his first season on the field. Junior kicker Eric Ellestad had a resounding debut at Syracuse on Sept. 5 , making three field goals out of four attempts, including the game-tying and game-winning kicks in a 23-20 overtime victory. The performance earned him the honor of Big Ten Co-Special Teams Player of the Week . Since the opener, Ellestad has converted each of his last four field goal attempts, and he has been perfect all season on extra-point kicks . While Ellestad has quietly succeeded in recent games, his teammates on special teams made plenty of noise with their play against Purdue. âÄú[Saturday] was a byproduct of a lot of hard work,âÄù Brewster said. âÄúOur team truly believes that special forces can win games for us, and then [Saturday we saw] validation.âÄù