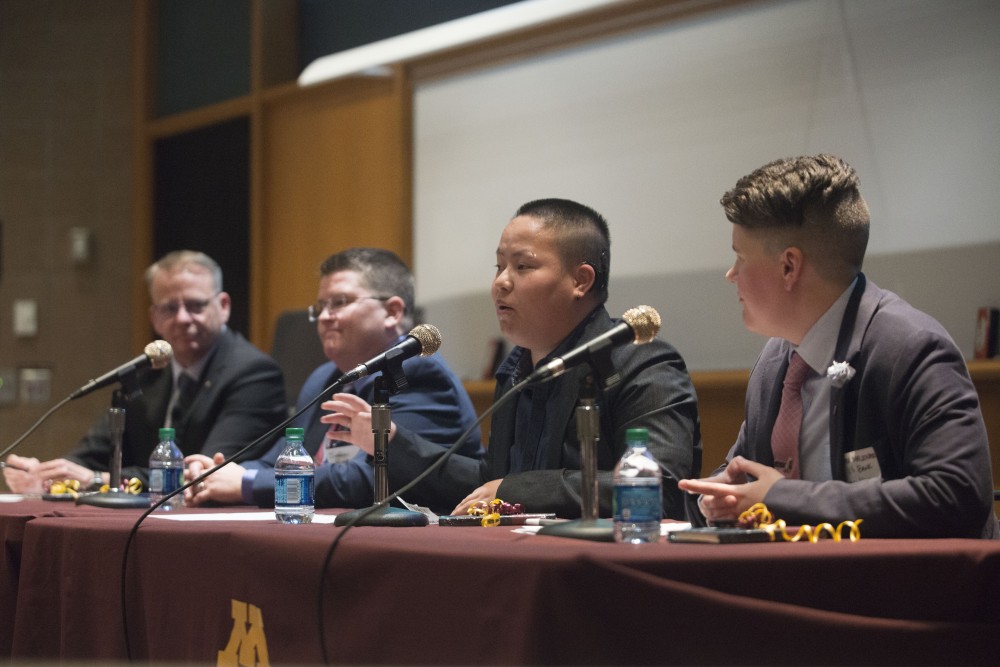 Jaemi Hagen speaks during "He, She and They: Understanding and Welcoming Non-Binary Employees and Customers" at the 3M Auditorium in the Carlson School of Management on Tuesday, March 26. The event, hosted by the Twin Cities Human Rights Campaign, presented ways to build understanding of gender identity and offer support in the workplace.

Twin Cities business leaders and employees gathered at an event at the Carlson School of Management Tuesday to discuss gender identity and expression in the workplace.

“He, She and They: Understanding and Welcoming Non-Binary Employees and Customers,” was an opportunity for nearly 300 employees to learn about ways to better serve their clients, customers and employees. The Twin Cities branch of the Human Rights Campaign hosted the panel in conjunction with U.S. Bank and Carlson.

“This was driven by the interest of the business community,” said Dennis Jolley, Minnesota representative on the HRC national board of governors. “One thing I hope comes out of this is that companies start thinking about how they can proactively be more inclusive.”

Speakers pointed to restrooms and lodging assignments as areas that can reinforce gender stereotypes in the workplace and be unwelcoming to non-binary employees.

“Because I was assigned female at birth, what I found was that there were a lot of doors that were closed for me,” Shawn Wimberly, a process analyst for Best Buy, said during the panel. “And that was really frustrating.” Panelists also discussed solutions to address ignorance surrounding different gender identities in the workplace. Attendees then asked the panel questions about how to be better allies to colleagues with non-binary gender identities.

Some employees experience having their pronouns ignored by colleagues, panelists said. Jaemi Hagen, a fourth-year psychology student, stressed the importance of allies investing time to learn about different communities on campus.

“It’s important because it shows there [is] a community and a sense of security,” Hagen said. “Be willing to have an open mind and open eyes to the different identities that people hold.”

Jolley said oftentimes the burden to educate colleagues on diverse identities is put on non-binary individuals. Wimberly stressed the value of having resources for employees to educate themselves instead.

“We don’t expect anybody out there to be perfect. What we do expect is for you to show respect,” Wimberly said.

Graduate student Esha Gupta said she attended the event to be a better ally for members of the LGBTQ community. Gupta said she learned more about the importance of addressing pronouns.

“One thing I learned is that it’s so hard for some people to be able to identify themselves,” Gupta said. “It’s something that comes so easy to us. We actually are privileged, which is one thing that came strongly out of these stories. I think they were very moving and touching.”