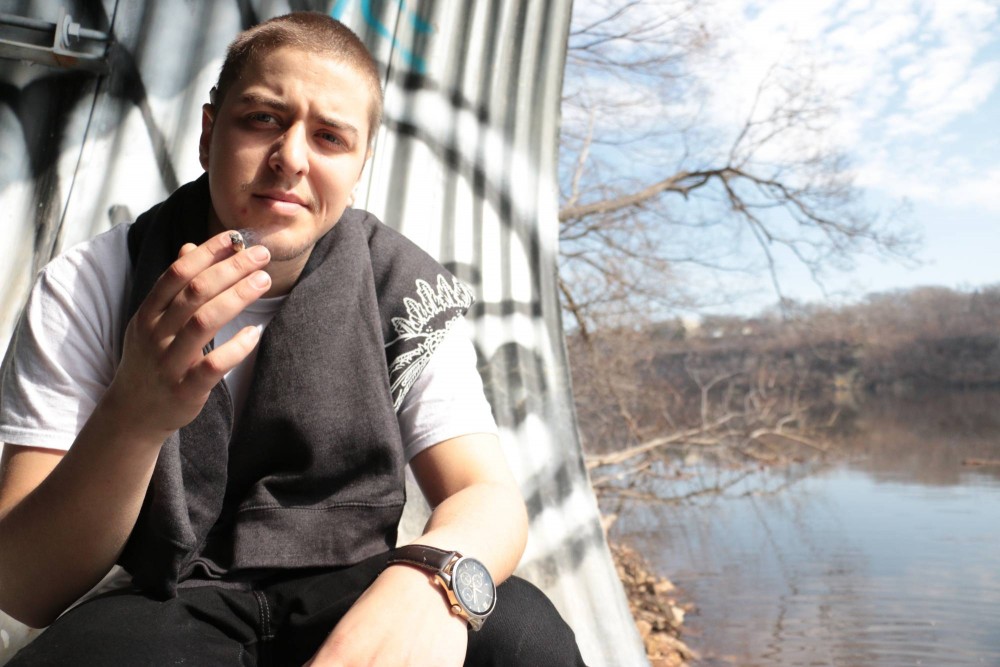 Minneapolis rapper Manny Phesto will rap about south Minneapolis culture at Rock For Rasmea at Intermedia Arts this Saturday.

The area inspired some of his music, which he describes as “stream-of-consciousness.” Levins Holden said he used to drive around in the area for hours, free styling with friends on a digital voice recorder.

“We used to hang out at this dude, Liquor Store Steve’s house. He was the older guy we all thought was cool because he could buy us booze and tobacco products and stuff,” Levins Holden said. “We’d be over there sitting in his broke-down Buick in the garage after high school and he’d be like, ‘Yo, spit something’ and nobody would spit anything, so I started spitting.”

Since his early days of messing around on GarageBand with friends in an attic, Levins Holden released a short EP and one full-length album, “Southside Looking In,” which was named one of the best Minnesota Rap Albums of 2014 by City Pages and one of the Best Local Albums of 2014 by Reviler.

“The biggest thing is just letting people know you exist because this is the land of 30,000 rappers,” Levins Holden said. “Just being able to pay rent off of making music was a big bucket list thing. The first time I did that I was like, ‘Ayyy! I made it!’”

Manny Phesto is performing at the Rock for Rasmea benefit show on Saturday night, which will be hosted by a volunteer-based peace group. With soul samples and hard drums, the music sounds smooth and dusty.

Levins Holden’s lyrics are often nostalgic references to growing up in south Minneapolis and come through a political lens. He said he tries to write every day and keeps pages of notes on his phone to document anything that inspires him.

“I think the content in his music has a real original style. He’s a real enlightened guy,” said producer Michael “Mike the Martyr” Irgens.

Irgens mixed, recorded and produced all the beats for the “Southside Looking In” album. The two met at a studio session — Irgens admired Levins Holden’s ambition and positive energy.

“He has a lot of knowledge in his music about current social issues,” Irgens said. “A lot of guys in hip-hop don’t really have a good angle on current social topics like Manny does.”

As the son of social justice activist and visual artist, Ricardo Levins Morales, Levins Holden said social consciousness was engrained in him at a young age.

Levins Holden’s strong opinions about authority and government oppression come through in his music, but he said he’s not trying to preach politics.

“I hope some of my stuff pisses people off or just motivates them to try to do something about it,” Levins Holden said.

During the local midterm elections, “Manny Phesto for Minnesota” signs scattered lawns for self-promotion, but it was also to encourage people to vote.

“The most important thing that we can do as local citizens is to decide who represents us here,” Levins Holden said. “Local politics are where we actually have a way to change stuff; calling your Senator in Washington isn’t going to do too much.”

Levins Holden said he wants to keep making music that people can relate to and bringing out more emotion.

“A year from this very moment, I would like to be on tour somewhere, eating nice food,” Levins Holden said.

What: Manny Phesto (Rock For Rasmea)