Professor Joel Weinsheimer commutes between Minneapolis and Atlanta every week. 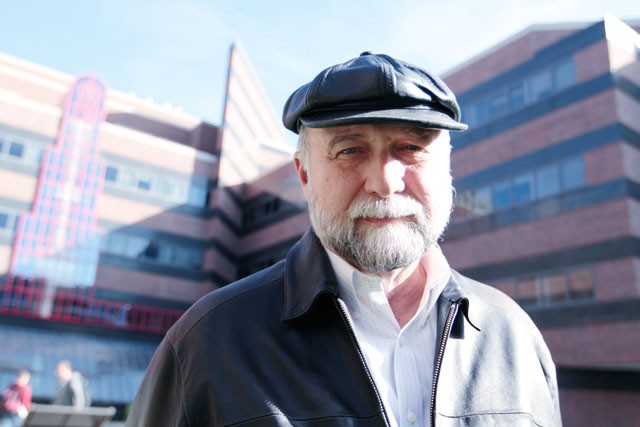 Professor Joel Weinsheimer stands in a courtyard outside Lind Hall on Tuesday.

There are about 1,200 miles between Minneapolis and Atlanta, and professor Joel Weinsheimer makes that commute every week.

“I donâÄôt think much about it any more. ItâÄôs like asking somebody, âÄòWhat do you think of getting in your car and coming in from Eagan?âÄô ” Weinsheimer said.

“ItâÄôs only two hours in the air, so itâÄôs just another way of commuting âÄ¦ but I suppose I go a little further than a number of people.”

Weinsheimer is in his final year at the University of Minnesota, where he has taught in the English department since 1984. Over the course of his career, he has published 10 books in addition to teaching courses such as Introduction to Modern Fiction and the 18th Century British Novel.

His unconventional commute began in 2005, when his wife Joyce left her position at the University and became assistant director for faculty development at the Georgia Institute of Technology.

“The benefit of the frequent flyer line is that it makes life a lot easier than standing in the long lines,” Joel Weinsheimer said. “And you realize the joy of elitism. The benefits of elitism. I use those as much as I can.”

A few years earlier, the Weinsheimers purchased a vacation home on the Reynolds Plantation in Greensboro, Ga., with the plan to retire there.

“We wanted to find a place where you didnâÄôt have to take two flights” to get there, Joel Weinsheimer said. “I was talking to a Northwest agent and she said, âÄòWell, you can get to Atlanta easy.âÄô [We] went to [Reynolds] once and bought immediately.”

“I do my full-time job in four days, so we both have three-day weekends,” she said. “ItâÄôs not for everyone, but it works for us.”

Joel Weinsheimer said he decided to stay at the University because he had felt passionate about his decades-long career.

When heâÄôs in Minnesota, Weinsheimer rents a room from a family in Roseville he found on Craigslist. He flies in every Monday morning, has class Tuesdays and Thursdays and flies home to Georgia on Thursday evenings.

“I donâÄôt think itâÄôs interfered with his commitment to the University [or] helping us do things as a unit, as a department,” English professor Gordon Hirsch said. “HeâÄôs quirky. I think heâÄôs unconventional, provocative.”

Weinsheimer said he feels like heâÄôs leaving the University during a time of tumultuous change. In particular, he said the English department doesnâÄôt have a “sense of common purpose that IâÄôm aware of.”

He went on to say the problem is that all the members of the department have “found our own specialties âÄ¦ which spin off, generating out of itself multiple, independent disciplines.”

“Is it possible that, at [the University], the English department could be gone?” For the department to survive, the younger generation will need to adapt, he said.

As WeinsheimerâÄôs final lecture draws near, he said he is looking forward to spending more time with his children and two grandchildren in Colorado as well as flying to destinations other than Minneapolis.

“Someone asked me the other day if I felt like George Clooney in Up in the Air,” Weinsheimer said, “But, no.”