Leaders of the pack

Alpha Consumer is back on the scene, asserting their musical dominance. 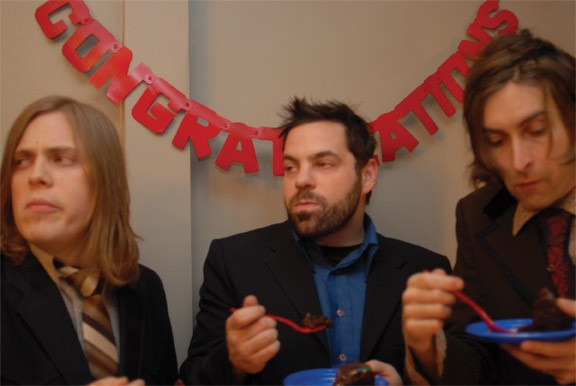 When it comes to distinctive local rock, Alpha Consumer takes the cake.

What: Alpha Consumer with Andrew Bird

No one needs to tell Alpha Consumer how to be Minneapolis rock stars; theyâÄôve already got it down to an art. Since 2005, the talented trio has been cranking out their guitar-fueled meditations in the Twin Cities, leaving a strong impression. Their simple, rough-riffed energy combined with the skills of consummate lyricist and frontman Jeremy Ylvisaker, have fashioned them into the kind of band thatâÄôs vitally rock âÄònâÄô roll âÄì that is, best served with a cold beer and an attitude.

Even so, theyâÄôve been kind of a tease. Parts of the band have toured with Andrew Bird. Others have been diverted by side projects. However, on Thursday in the Mainroom, their focus is channeled toward the exact same thing: reclaiming their rock âÄònâÄô roll turf as Alpha Consumer.

âÄúWe all are musicians for a living, so itâÄôs like, we have work to do,âÄù Ylvisaker said. âÄúAnd though we donâÄôt get to play that often, when we do get together it always feels brand new.âÄù

Adding to the excitement of the bandâÄôs triumphant return to the stage is the announcement of a soon-to-be-released third album, âÄúKick Drugs Out of America.âÄù

âÄúWeâÄôve had this recording done for almost two years now,âÄù Ylvisaker said. âÄúWe just canâÄôt get organized enough to actually put it out so we just started burning it. Yeah, weâÄôll get that out soon.âÄù

The album, though crafted from the same Pavement-esque foundations as Alpha ConsumerâÄôs first two releases, marks a definite growth.

âÄúThis album is the most clear,âÄù drummer J.T. Bates said. âÄúItâÄôs the most us. JeremyâÄôs songwriting has just gotten better and better.âÄù

This time around, Alpha Consumer spent considerably more time on production, constructing an album thatâÄôs clean, polished and full of lyrical complexity. Ylvisaker has never been daunted by heavy issues.

It would be easy for such an aim to become convoluted in its delivery. However, Alpha Consumer manages to tackle the complexity with elegance and the deep-seated meaning comes across.

Having shared the stage with Andrew Bird, the band has been subject to two radically different performances. Though Alpha Consumer is surely the more abrasive outfit, theyâÄôre able to pull something valuable from the contrast.

âÄúOn this record, I actually did think about how [Andrew BirdâÄôs] fans would hear it,âÄù Ylvisaker said. âÄúI changed some lyrics so that it wouldnâÄôt shut the door for people that like his sound. I was influenced by playing with him, so much.âÄù

Their performance together will undoubtedly highlight these influences, and while Minneapolis may not often get the opportunity to see Alpha Consumer in all of their shredding glory, theyâÄôve made it crystal clear that theyâÄôre not going anywhere.

âÄúWe will know each other for as long as we all live, and we might as well play music together,âÄù Ylvisaker said.