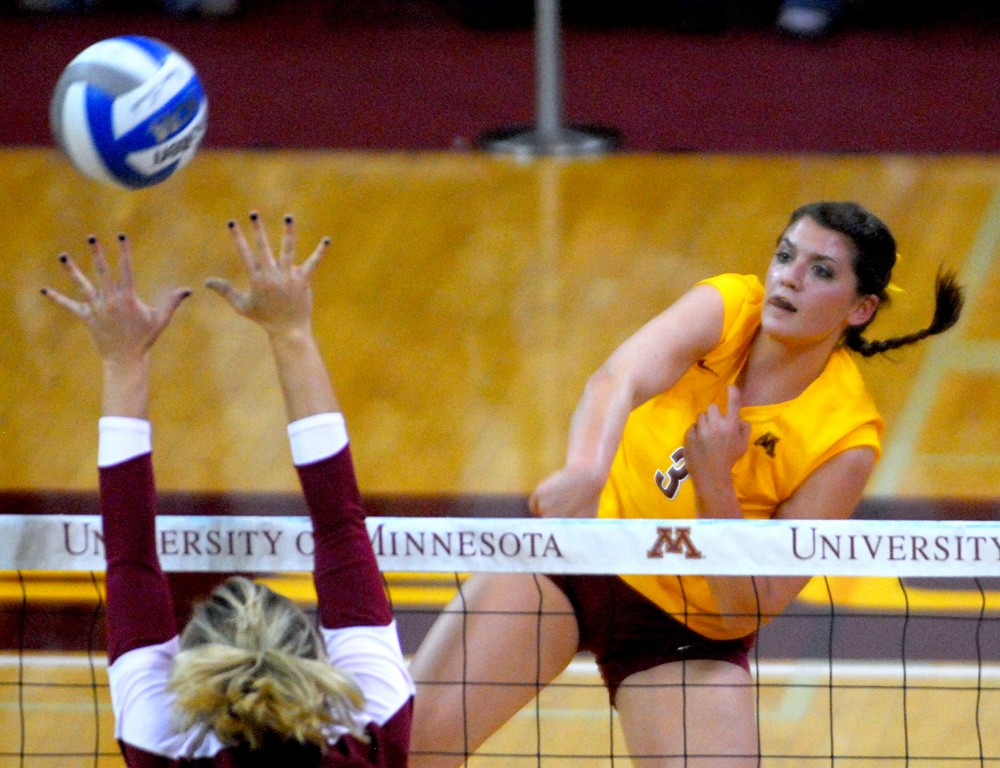 Give credit to Iowa State. ThatâÄôs what coach Mike Hebert and junior libero Christine Tan said following the biggest upset thus far in the NCAA womenâÄôs volleyball tournament. After walking all over North Dakota State, 25-18, 25-14, 25-14, the night before, the 6th-seeded Gophers looked overmatched by the Cyclones on Saturday at the Sports Pavilion, and lost in four sets, 14-25, 24-26, 27-25, 19-25, ending their season early. Minnesota played from behind the entire match, having to attempt comeback after comeback to keep its hopes alive. âÄúIt was physically and emotionally tiring,âÄù senior outside hitter Katie Vatterrodt said. âÄúThis entire season weâÄôve been a clutch team. But Iowa State was just too much. They were getting a lot of frustrating touches that we just werenâÄôt used to seeing.âÄù The GophersâÄô offense did not look good, as Iowa State served aggressively, forcing bad passes to send MinnesotaâÄôs offense out of system. Two seniors did play extremely well despite the pressure put on by the Cyclones, as outside hitter Katie Vatterrodt and middle blocker Kelly Schmidt fought throughout the match to prolong their season and career. Vatterrodt collected a team-high 13 kills and hit .321, while Schmidt added a 10-kill performance, hitting .562. âÄúWe had trouble with their serve, so it was harder for us to run our typical offense,âÄù Vatterrodt said. âÄúThen they played good defense on top of that. I found a few holes down the line, but it was definitely difficult to find any openings.âÄù The seniorsâÄô effort just wasnâÄôt enough. The Cyclones focused on shutting down sophomore middle blocker Lauren Gibbemeyer, and while they didnâÄôt quite do that, they contained her well enough for all but one set. In the third set, GibbemeyerâÄôs fiery edge finally broke through as she became a scorer with six kills, two coming with Minnesota facing match point, and four coming in the final eight rallies. Gibbemeyer finished the night with 13 kills. Minnesota has always been a strong defensive team, and when the offense isnâÄôt quite there, the Gophers have been able to count on the defense. But the defense wasnâÄôt on top of its game either, as miscommunications either sent two players colliding in pursuit of the same ball, or left them looking at each other as a seemingly-easy dig floated to the ground. This sometimes left what seemed to be a look of bewilderment on HebertâÄôs face, as he looked on. Hebert said that while his defense was not at the highest level heâÄôs seen this year, it wasnâÄôt bad overall, either. But Tan said noise from the crowd made things harder to hear, leading to a breakdown in communications. âÄúThe [Pavilion] was really loud tonight,âÄù she said. âÄúA lot of times we couldnâÄôt hear each other, which might have been a problem. I think we did play good defense at times, but the ball just kept coming back.âÄù Tan finished the night with 19 digs, but Iowa State out-hit the Gophers .288-.207, taking the match in four sets. Minnesota had better luck Friday, running a crisp offense and playing solid defense to out-hit the Bison .317-.052. Senior outside hitter Kyla Roehrig collected 11 kills and hit .647 that night, while Gibbemeyer added 11 kills and a .364 hitting percentage. Senior setter Rachel Hartmann finished her career with 34 assists Friday and 44 assists and an ace Saturday.