Neal Karlen spills the secrets of Minneapolis mobsters like “Icepick Willie” and “Kid Cann” who dominated Hennepin Avenue in the 1940s and 50s. 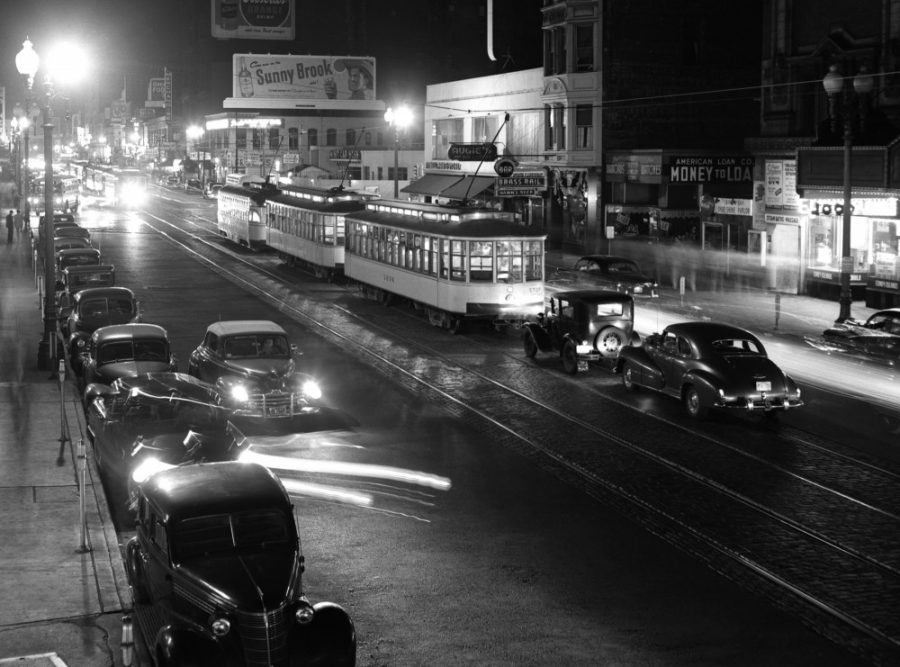 Augie's Bar lies behind the streetcars on Hennepin Avenue in this 1949 photo.

Israel “Icepick Willie” Alderman punctured victims’ brains via their eardrums with his namesake tool — that way, an autopsy would fail to detect any sign of a homicide. The hit man, known across the country, once resided in Minneapolis. In spite of his grisly crimes, Alderman barely stands out from the surface of the city’s rich history of deviance.

Growing up, Neal Karlen heard stories about the peak of the Minneapolis Jewish mafia in the 1940s and 50s. The former Rolling Stone journalist remembers anecdotes about Augie Ratner, his great uncle and “King of the Hennepin Strip.” Karlen’s book, “Augie’s Secrets,” finally sheds light on the cast of criminal characters, but 20 years ago, Karlen couldn’t find anyone who would talk.

“Suddenly in their 90s, everyone was willing to talk,” he said. “I don’t know if it’s because, you know, they just didn’t give a [expletive] anymore.”

Plenty of colorful portraits of bootlegging and gambling give gravitas to the local crime syndicate of Minneapolis, often ignored when compared to the national gangsters who visited St. Paul — John Dillinger, Pretty Boy Floyd and Ma Barker all holed up in the capital.

“But these guys were lightweights compared to the Minneapolis born and bred gangsters who really controlled vice and gambling, not just in Minneapolis, but a big swath of Las Vegas and Miami Beach,” Karlen said.

“Augie’s Secrets” shares a loving biography of Ratner while detailing the commonplace corruption of the time. Bootlegging liquor fueled the growing mob presence as the anti-Semitism in Minneapolis grew with the flux of Jewish immigrants, as Karlen recalls.

“They all started as bootleggers. That was because Jews literally couldn’t get hired in any job,” he said. “So if you had ambition, you went into bootlegging.”

Karlen’s entertaining dirty laundry list in “Augie’s Secrets” details the beginning of organized crime connected to the alcohol smuggling of the 1920s. Among the moonshine sellers, he points to Benny Haskell, who paved the way in the prohibition era.

“He could provide the best bootleg hooch to the rich gentiles on Lake Minnetonka, who wouldn’t let him in the front door,” he said.

Equally interested in the seedy history of Minneapolis and all of the vivid characters involved, criminals or bystanders, Karlen writes with the same obsessive enthusiasm in his music journalism.

“I was trying to paint a scene, not just of gangsters, but of a time when Minneapolis really was the funkiest place in the world,” he said. “There’s a reason Prince came out of here.”

Karlen never met his great uncle, but before Ratner passed away in 1979, the man who befriended the criminal underworld left the writer a gift.

“I got a Bar Mitzvah present from him, and it was postmarked Las Vegas — it was two 1927 silver dollars,” he said.

The strip club bearing his great uncle’s name, Augie’s Cabaret, still stands as a vestige of the mob’s former presence. Now Karlen can only see the vibrant city in “Augie’s Secrets” whenever he walks on Hennepin Avenue.

What: Neal Karlen: “Augie’s Secrets: The Minneapolis Mob and the King of the Hennepin Strip”