The exhibit showcases Islamic influences and will open in June. 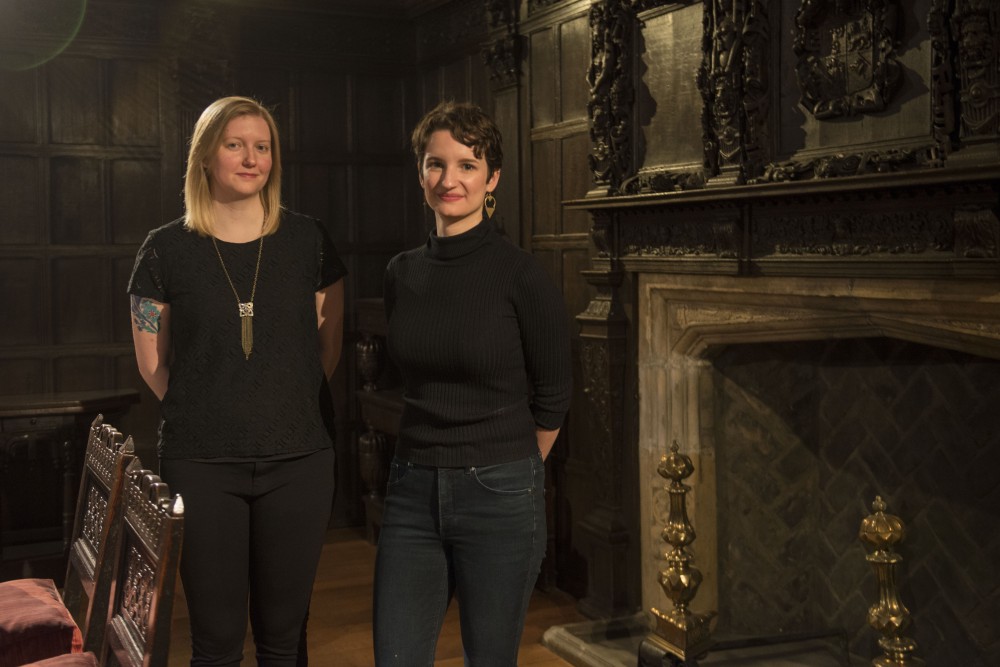 Katie Sisneros, lead curator of the Tudor room project, and Alyssa Gregory, student researcher, pose in the Tudor room at the Minneapolis Institute of Art on Saturday, April 27. The room will be renovated to show the relationship between England, the Ottoman Empire and other Islamic powers in the 16th and 17th centuries. "We have these amazing period rooms here, and I think it's important every so often to use the spaces to tell different stories," said Sisneros.

A University of Minnesota alumna and several graduate students are working to install an exhibit at the Minneapolis Institute of Art that better showcases the relationship 15th and 16th century England had to the Islamic world.

The Tudor Room, installed at the Mia in 1923, is an entire period room from the 1600s that was removed from an English Tudor home – including furniture, the ceiling, windows and wall-panels – and is the oldest Elizabethan-period room in the nation.

However, the room does not necessarily reflect the trade relationship between England and the Ottoman Empire, which was sometimes amicable but often turbulent, according to University professor Nabil Matar.

Though the difference in cultures and religions sometimes led to trade disagreements, influences from the Islamic World were evident among many upper-class English households, including colorful textiles and ceramics, which are now being added to the room.

“We’re trying to illustrate a part of history that most people just don’t know about,” said Katie Sisneros, an alumna who is spearheading the project and is in a two-year fellowship with the Mia.

The exhibit, which is slated to open in June and will be open for at least a year, will make for a more immersive experience.

According to Matar, Queen Elizabeth I of England turned to allies in Istanbul and Morocco after being excommunicated by the pope and establishing England as a Protestant state. Matar said the relationship between England and the Islamic world is often ignored in historical discussions.

“There was some interest in Islam and England in the past, but it never entered the scholarly and academic discourse,” Matar said in an email, adding that this relationship was really only mentioned in plays or poetry. “The approach of scholars … ended up being one-sided, with Islam and Muslims being studied as ‘invented’ characters by English writers.” Alyssa Gregory, a University master’s student studying heritage studies and public history, is one of three students working with Sisneros to research and curate the room. Gregory said she hopes the room will become more interactive.

“For years, the Tudor Room was just sort of brown wood with brown things in it, but it’s really going to come alive with textiles and ceramics, bright reds, blues and greens,” Gregory said. “Something that may only be one or two sentences in someone’s textbook will now be shown visually in a space that people can actually explore for themselves. “

On the dining table will be wax foods and spices introduced to England by the Islamic World during this period, including currants, pistachios, nutmeg and turmeric. There will be electronic monitors showcasing period texts and arts, as well as ceramics, textiles and maps.

“We’re trying to cram a ton of information into a really small room,” Sisneros said.

Sisneros said it was difficult to strike a balance between providing enough information about included artifacts without overwhelming visitors; the team of researchers recently scaled back the total word count of their signs from 7,000 to 5,000 words.

According to the Southern Poverty Law Center, 2018 saw the highest number of recorded hate groups in the U.S. since 1999. Sisneros said growing Islamophobic rhetoric and actions are just a few reasons why an exhibit that explains how relationships between the Islamic world and Westerners formed is more important than ever.

“By necessity, an exhibit can’t exist in a vacuum. It has to address the world around it,” Sisneros said. “I hope the work we’ve put in has sort of expressed how much that matters to us. The room tells a story that’s as much historical as it is contemporary.”