Minnesota hasn’t fared well on special teams yet so far. 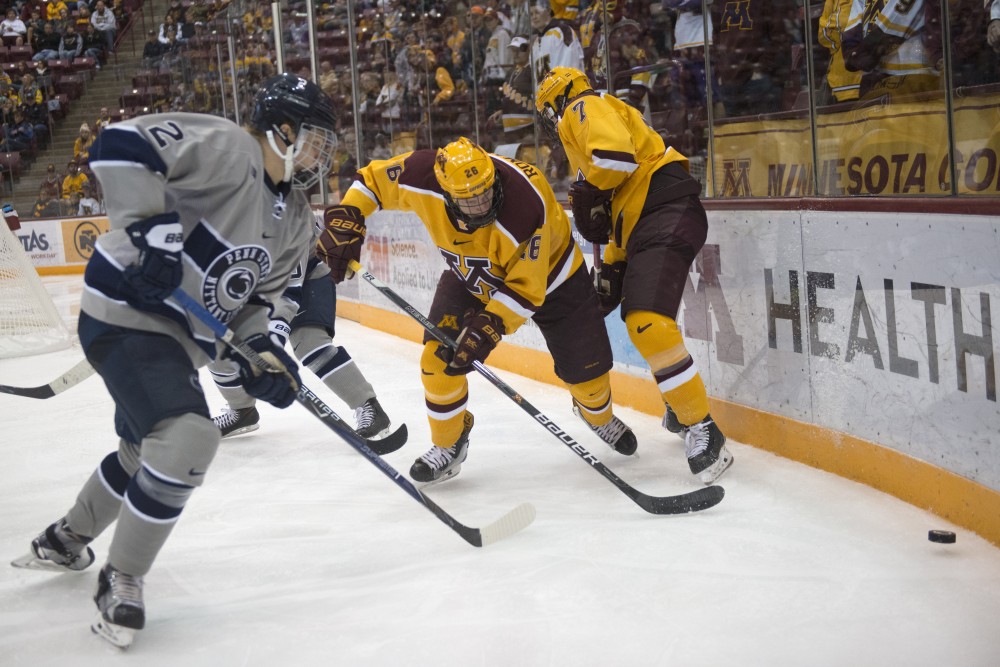 Forward Darian Romanko fights for the puck at 3M Arena at Mariucci on Saturday, Oct. 15.

The unproven players are proving themselves – except on the power play.

No. 8 Minnesota will play its longtime arch-rival No. 4 North Dakota this weekend, and the Gophers’ scoring is largely one-sided four games into the season. Nine different players have goals, with seven of them coming solely in five-on-five situations.

“When you’re a leader and you just haven’t got on the score sheet, sometimes you start to press a little bit more,” said head coach Don Lucia. “Hopefully, even though they’re playing hard, they can get on the score sheet and feel better about themselves too.”

The Gophers are 2-2-0, and were inconsistent over the weekend.

A variety of players have shown promise with even strength.

A pair of freshmen sit at the top of the even-strength scoring list with Casey Mittelstadt and Brannon McManus each with two even-strength goals. McManus had a hat trick in his third game with the Gophers on Sunday, one power play goal and two at even strength.

Nine of the 12 goals for Minnesota this season have been at even strength.

“We’ve struggled up to this point,” said forward Tommy Novak. “If we can get the puck moving around and get some shots on net, we have the skill to score a lot.”

Novak has played all four games on the power play, but only has one shot in that time.

Minnesota has clipped over 25 percent on the power play twice in the last three seasons, and last season’s 25.16 percent was good for fifth-best in all of college hockey.

“Jake… is a heck of a hockey player,” said assistant captain Ryan Lindgren. “He’s smart, he’s got a great shot. We miss that a little bit, but I think we [have] great guys on the power play right now, and I think it’s coming along really good.”

While the next two top power play scorers returned in captain Tyler Sheehy and assistant captain Leon Bristedt, the Gophers have a lot of new personnel on that power play line.

Assistant coach Scott Bell was new to the staff this offseason, filling the vacancy left by Grant Potulny leaving the program.

“We’ve been sharing it right now,” Lucia said. “Grant [Potulny] pretty much ran it, Scott [Bell is] still trying to get used to how we do things here. Our whole staff is doing it together right now, and as the year goes on we’ll throw more and more at him.”

Even though each player Bell works with is new, he is managing the shifting power play personnel.

“He’s been very effective,” Lucia said. “He’s got a video session coming up with the forwards, and he’s done a nice job, and it’s been a real nice transition having him on our staff.”

Sheehy has missed two games, and Bristedt has missed one game, and both have yet to score for the team.

Seven of the Gophers’ 12 goals this season have come from freshmen, and all three of the team’s power play goals came from underclassmen.

“The important thing in the next few weeks for us, we’ve got to get Bristedt [and] Szmatula on the scoresheet,” Lucia said. “We lost some guys that were at the front of the bus last year, we need the guys that were sitting behind them to move up into those seats.”