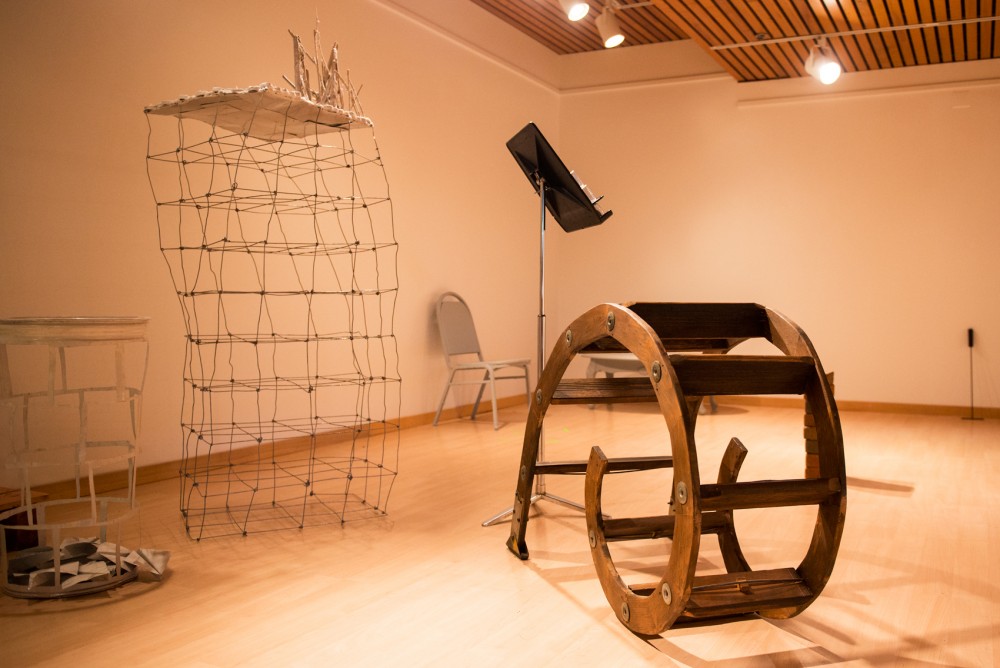 Pieces of art by Charles Nestor sit awaiting set up in the Larson Art Gallery in the St. Paul Student Center on Tuesday. Nestor, along with fellow artist Cassandra Buck, use found objects to create new pieces of art. Their exhibit, "Lost & Found", will be on display beginning March 25.

Jared Hemming
If you look inside the nearest garbage can, you might find an object that would fascinate Cassandra Buck or Charlie Nestor. That’s not to say that either artist digs around in trash, however.
In “Lost and Found,” a new art exhibit in the St. Paul Student Center, Nestor and Buck separately prove that art can be hiding anywhere — like the makeup cabinet, in Buck’s case.
She came upon the inspiration for a standout piece in “Lost and Found” while rummaging through old beauty products. With thoughts of capitalism and womanhood in her mind, Buck snatched old makeup packaging to create the piece, “A Billion Dollar Industry.”
“We’re bombarded with these products of what we should be using to make ourselves look beautiful,” Buck said. “We think ‘pretty.’ We think ‘pink.’ We think ‘clean’ and ‘innocent.’ My work is really gritty and textural. It doesn’t have that sweetness.”
Buck spray-paints most of her work monochrome to emphasize the objects’ surfaces. Old perfume bottles and eye shadows come together to form “A Billion Dollar Industry.”
It’s a process for creating art that leaves Buck thinking twice before considering anything trash.
“It’s hard for me to throw stuff away now because I always think it could be used for something,” she said.
Though he hadn’t known Buck before “Lost and Found,” Nestor too feels a similar instinct before parting with any object.
As a commercial real estate developer working to restore old buildings for different uses, it’s natural Nestor would try to use old objects in new ways.
For example, a pallet that his company used to renovate a building became a part of a piece of art after Nestor found it.
By pairing the pallet with an old tree stump and covering each in copper leaf paint, Nestor turned old ephemera from a renovation into a representation of his perspective on globalization.
For that piece, like all his sculptures, Nestor lists off each item’s entrance into his life on the art’s description.
“It may not mean much to anybody else, but for me it’s a ticking-off process,” Nestor said. “All the objects are recognizable, but by subtle manipulation, they can take on different connotations and different stories.”
Nestor is fascinated by interpretation, and his art jams different items together into one piece to highlight the combination’s contrast.
Nestor collects various items with passion, hoping to turn his initial excitement for an object into art by re-contextualizing it.
His philosophy is, “Someday, it will be something.”
“There are individual stories behind each piece,” Nestor said. “There’s a story behind where the individual objects came from, and then the end result.”
Lost and Found exhibit
Where St. Paul Student Center, 2017 Buford Ave., St. Paul
When 6 p.m. Friday
Cost Free
Delete Image
Align Left
Align Center
Align Right
Align Left
Align Center
Delete Heading