Minnesota defeated both Nevada and Montana at the Minnestoa Gold Classic this weekend. 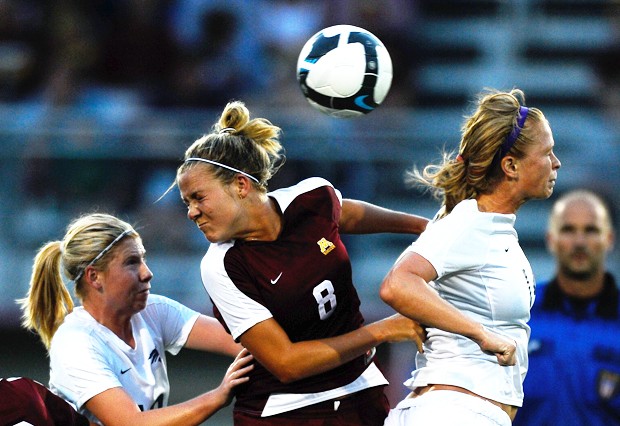 The Minnesota soccer team (6-2-1) boasted some quick scoring against Nevada this weekend that helped secure a 4-1 victory over the Wolf Pack on Friday before adding another win over Montana, 1-0, on Sunday. The two wins marked the end of the Gophers non-conference season and extended their home undefeated streak to 17 games. âÄúWe had time to mentally refocus for this weekend after our loss last Sunday,âÄù junior Angie Olson said. âÄúItâÄôs always one of our team goals to score right away and get the other team down on themselves.âÄù Olson has been one to follow through with this task, taking just 3 minutes and 45 seconds to find the net against Nevada after taking an assist from junior Katie Bethke . It was OlsonâÄôs second goal of the season, and she now boasts the teamâÄôs two fastest goals in 2009. Her first goal of the season came just 4:10 into the match against South Dakota State on Aug. 21 . Senior Dana Tripp netted her first career goal in the 42nd minute when the ball rebounded off Nevada goalkeeper Dana Moreno and back to Tripp, who put it into the right side of the net. With this, the Gophers carried a two-score advantage at halftime. Freshman Marissa Price opened up the second half scoring nearly as quickly as Olson in the first half, with a corner kick in the 50th minute . Price hardly noticed her first career goal that landed in the far right corner of the net. âÄúTo be honest I didnâÄôt even realize it was a goal until Katie Bethke was like âÄòMarissa, you scored, you scored!âÄô,âÄù Price said. âÄúIt wasnâÄôt pretty, but whatever. It works.âÄù Nevada averted the shutout in the 71st minute with a free kick by Jill Erickson that went just outside the reach of redshirt freshman goalkeeper Cat Parkhill . Parkhill repelled other advances from the Wolf Pack during the game, tallying four saves on five shots. Minnesota recorded 23 shots during the game , its second-highest total of the season. Attendance numbers at Elizabeth Lyle Robbie Stadium also reached the second-highest mark in history with 1,670 fans . âÄúThe other piece about tonight was what a tremendous environment; it was just electric,âÄù head coach Mikki Denney Wright said. âÄúI donâÄôt think thereâÄôs a better environment in the Big Ten.âÄù The final goal, scored by senior Sara Clancy in the 88th minute , hardly grabbed the attention of the crowd as it appeared to roll in on accident. âÄúWe call that framing on the back post,âÄù Denney Wright said. âÄúIt seems crazy, but we do design that play just in case it pops out.âÄù Bethke leads against Montana Minnesota took more time getting its lead against Montana, not scoring until the 19th minute when Bethke blasted a shot after an assist from junior Julie Rezac. The goal was BethkeâÄôs sixth of the season, breaking her previous season record of five . BethkeâÄôs efforts against the Grizzlies resulted in a career-high nine shots, with four on goal. âÄúSome of those shots probably shouldnâÄôt have taken,âÄù Bethke said. âÄúI definitely think we should have put more away, but thatâÄôs just laying out and being composed in the 18-yard box.âÄù Minnesota would rest on its 1-0 halftime lead for the remainder of the game, despite putting on heavier attacks at the start of the second half. The Gophers threatened Montana senior goalkeeper Grace Harris with three dangerous shots on goal within the first three minutes of the second half, but Harris responded with saves on each. The Grizzlies failed to create any type of trouble for the Gopher defense, as Minnesota held the team to just one shot the entire game, with none on net . Parkill recorded zero saves as the Minnesota defense preserved the shutout. âÄúOur back three were tremendous today,âÄù Denney Wright said. âÄúGreat with their distribution and great decision making âÄî one of the best games IâÄôve seen from them. The Gophers will open conference season Thursday, Sept. 24, at home against Iowa.