No charges for cops in Jamar Clark case

Activists who gathered after Wednesday’s announcement were largely somber and calm. 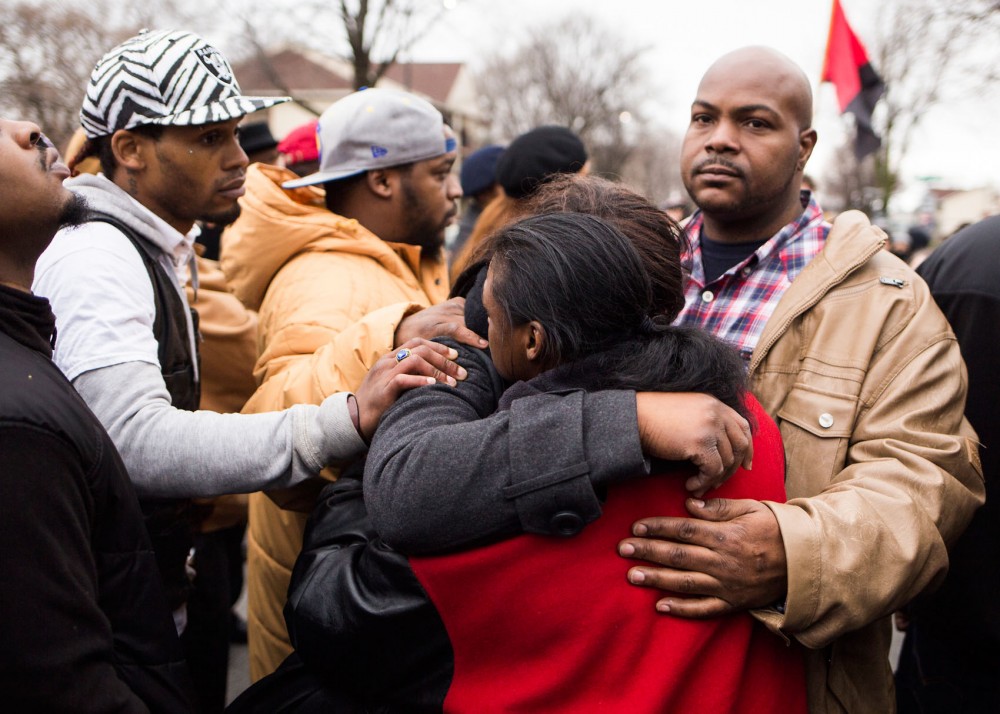 Members of Jamar Clark's family mourn together at the site of his shooting on Plymouth Avenue North on Wednesday. While some demonstrators marched to the Hennepin County Government Center, others chose to remain behind at the memorial. The day's demonstrations came after Hennepin County attorney Mike Freeman announced his decision to not charge MPD officers Mark Ringgenberg and Dustin Schwarze, who were involved in Clark's death.

After months of uncertainty and tension, a Hennepin County prosecutor announced Wednesday he will not file criminal charges against the two Minneapolis police officers who fatally shot a black man last November.

Jamar Clark, 24, was lethally shot in the head and killed after an altercation with police officers. Clark was interfering with paramedics who were treating his girlfriend.

The decision not to charge Minneapolis Police Department officers Mark Ringgenberg and Dustin Schwarze comes after a series of protests against police practices across the Twin Cities.

At a downtown press conference Wednesday, County Attorney Mike Freeman said charges were not justified because forensic evidence showed Clark’s DNA on Ringgenberg’s gun and holster. And contrary to some witness accounts, the investigation demonstrated that Clark was not handcuffed when Schwarze fatally shot him, Freeman said.

Freeman previously announced he would no longer use grand juries in police-involved shootings, including Clark’s, to decide whether to pursue charges in those cases.

“By making this tough charging decision ourselves, we’re increasing our level of accountability and transparency,” Freeman said.

At Wednesday’s press conference, Freeman recounted the night of Nov. 15.

Freeman said Schwarze attempted to handcuff Clark after both officers told him to take his hands out of his pockets, leading to a struggle.

He said Schwarze heard Ringgenberg say, “He’s got my gun,” and told him to shoot Clark. When Schwarze put his gun to the side of Clark’s head and ordered him to let go, Clark responded, “I’m ready to die,” Freeman said.

Clark was shot in the head 61 seconds after officers arrived on the scene.

Despite differing accounts on whether Clark was handcuffed, Freeman said DNA evidence wasn’t found on the inside of Schwarze’s cuffs, which were found on the ground near Clark .

Documents from the investigation and videos of the incident have been made publically available by the Hennepin County Attorney.

Still, some said they were unsatisfied with information Freeman presented.

“Somewhere along the way, someone must be guilty of something,” she said. “They’ve been doing this all of my life.”

Minnesota has never indicted a police officer in a similar case.

Minneapolis Mayor Betsy Hodges expressed her condolences to the Clark family and called the incident a “tragedy” during an afternoon press conference.

“My heart breaks for the loss of Jamar Clark’s life and for the pain felt by everyone involved in this incident,” Hodges said. “There is a tear that has ripped through our community, one we cannot sew back up.”

Hodges, joined by Minneapolis Police Chief Janee Harteau, also called for a separate federal investigation in addition to the one performed by the Bureau of Criminal Apprehension. The U.S. Justice Department’s Civil Rights division and the U.S. Attorney’s Office will determine whether to bring federal charges.

‘They thought we were going to riot’

Protesters reacting to Wednesday’s announcement were somber as they marched from where Clark was fatally shot in Elliot Park to downtown Minneapolis.

At 5 p.m., about 100 demonstrators gathered in front of a memorial where Clark was shot on Plymouth Avenue and North James Avenue to express disappointment with the lack of criminal charges.

Ushered by police on bicycles, demonstrators swelled to a crowd of 350 and eventually gathered in front of the county government center.

Collin Robinson, a Southwest High School student who lives near the 4th Precinct, said he and other Twin Cities youth had a stake in the outcome of the investigation.

“Students in Minneapolis are demanding justice for Jamar Clark,” Robinson said. “White people, the people in power, need to turn to our brothers and sisters and tell them black lives matter.”

Aaron Job contributed to this report.