U students lobby for clean energy 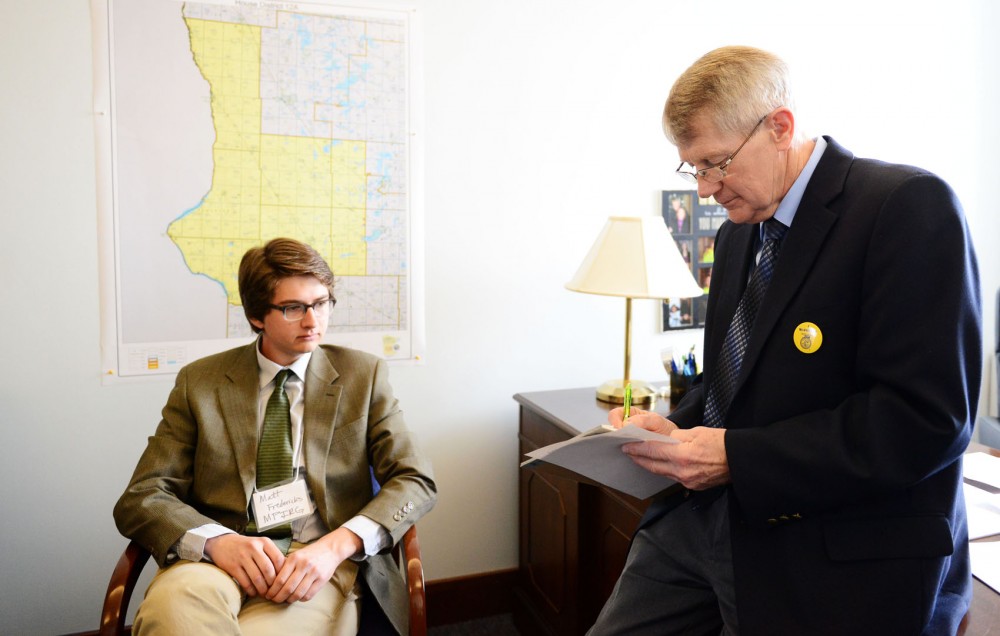 Packed together on the main staircase of the state Capitol on Monday, a group of about 100 students sang “You Are My Sunshine” behind the bright face of a papier-mÃ¢chÃ© sun.

Instead of the conventional lyrics, they sang of solar and wind power, ending the song with the words, “please don’t take my future away.”

The singers gathered from across Minnesota at the Capitol to lobby for cleaner energy standards. The lobby day was held in conjunction with Sunday’s Next Generation Environmental Congress, an event geared toward getting more youth involved in environmental policy decisions.

“We understand that a lot of this stuff gets complicated, but at the end of the day, this is really simple,” Winters said. “We need to advance a clean energy economy, and that’s what we’re here today to do.”

“These decisions are going to affect us more than anyone,” Johnson said.

He said students need to take action now so as to not pass on today’s energy problems, he said.

“Some people argue about the urgency of it,” he said. “I think it’s unethical if we put that off to the next generation.”

Students lobbying together in this magnitude can affect environmental legislation, said Dave Frederickson, commissioner of the Minnesota Department of Agriculture.

“Sometimes 10 people with the same issue is a mandate for a legislator,” Frederickon said. “So does it make a difference? Absolutely it makes a difference.”

A group of high school students spoke with Rep. Alice Hausman, DFL-St. Paul, about solar energy, an issue she said she’s passionate about.

She said the students she spoke to understood how renewable energy can be good for the economy because it keeps energy investment within Minnesota.

“They know energy is the potential economic driver in their near future,” Hausman said.

She said she encouraged the students to continue their environmental lobbying efforts throughout the legislative session.

“These are such important issues,” she said. “It won’t happen overnight, but don’t give up.”

Shira Breen, a junior at South High School in Minneapolis and a member of Youth Environmental Activists of Minnesota, said it’s important for students to realize what their state representatives can do for them.

“It’s really great that we have people that represent us, and we should utilize that,” she said, “and take advantage of the people who are there to support us.”

Rep. Phyllis Kahn, DFL-Minneapolis, whose district includes most of the University campus, said though she wasn’t able to speak with students Monday, she’s glad they turned up at the Capitol.

“It’s very important that they talk to their own legislators and be persistent,” Kahn said.

University anthropology senior Elena Haynes said meeting with Rep. Jim Davnie, DFL-Minneapolis, was very successful. Though he had questions about the issues she was lobbying, she said he was very receptive.

Haynes said this day was an effective way for students to have their voices heard in the Legislature.

“So often are youth voices not represented, especially with college and high school,” she said. “It’s really exciting [to show that] constituents still matter, and these issues still affect us.”

Rep. Jay McNamar, DFL-Elbow Lake, who represents the University of Minnesota-Morris district, said lobbying at the Capitol can be a learning experience for students.

He said it’s important for students to take action on the issues they care about.

“You can always have interests, but if you don’t do anything about it,” McNamar said, “what good does it do?”