The University of Minnesota is searching for a new president after Eric Kaler announced his resignation last month. 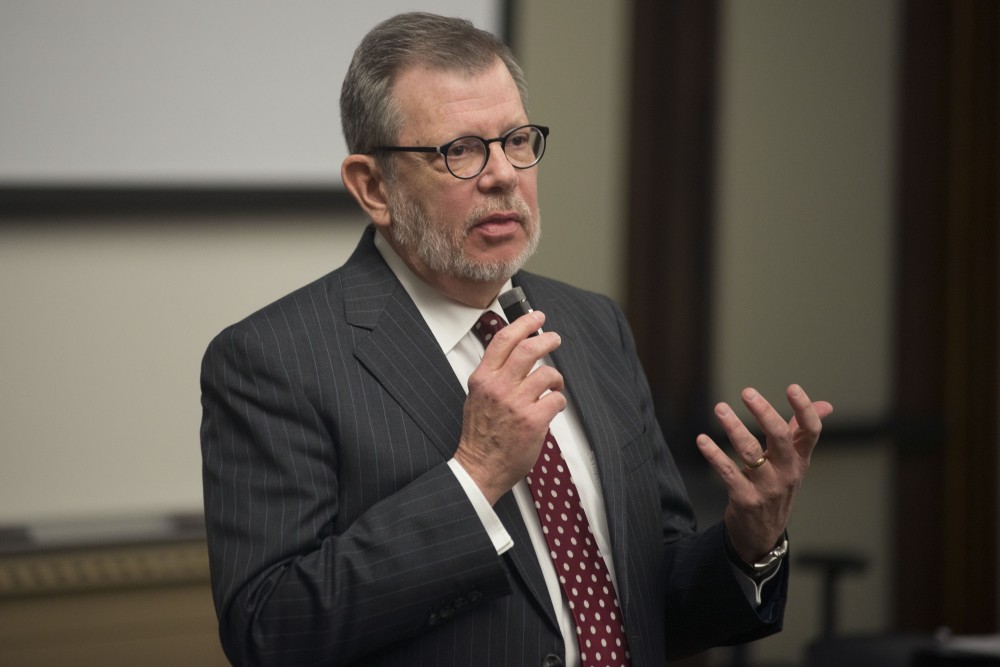 University of Minnesota president Eric Kaler answers questions from members of MSA during a meeting on Tuesday, Nov. 21, 2017.

With the search to find a new University of Minnesota president underway after Eric Kaler’s resignation announcement in July, former University leaders reflect on Kaler’s time in office and what they hope for in the new president.

According to former University president Kenneth Keller, who was in office from 1985 to 1988 and is currently a faculty member, Kaler’s resignation announcement was not a total surprise.

“Everybody always asks ‘is it a fun job?’ It is not a fun job. It is a job that is difficult in a lot of ways … it wears on you,” Keller said.

Keller said one of the job’s challenges is effectively communicating with students, faculty, regents, Minnesota residents and the State Legislature.

“Lots of things come into play and have to be balanced. You have to communicate with people; [it’s] probably the hardest part of the job,” he said.

Part of that work includes facilitating dialogue with faculty, including the Faculty Consultative Committee that serves as the University faculty’s governance and works closely with the president on University-wide issues.

“[Kaler] often showed up at FCC meetings with his sleeves rolled up,” said 2014–2015 FCC Chair Rebecca Ropers-Huilman. “I think actually that was a pretty good metaphor for, ‘okay, we’re going to get down to work here and we’re really going to engage.’”

Christopher Cramer, who served as FCC chair during Kaler’s first year in office, said a new leader can be beneficial to the University.

“I think [Kaler] has made the right decision in the sense of he feels like he’s done what he can effectively do rather than just keep the train in motion,” Cramer said. “Handing it over to somebody else who is high energy and brings some new ideas will be good for the institution.”

Former University President Robert Bruininks, who served from 2002–2011, said the average tenure for the position nationwide falls between four and four-and-a-half years.

After stepping down in July 2019, Kaler plans to assume a position alongside Keller in the Department of Chemical Engineering and Materials Science.

“We’re both going to be working here together. I told him that he can’t take my office when he returns to this department,” Keller joked.

Since Kaler’s resignation announcement, faculty, administrators and students have been vocal about their wishes for the upcoming 17th University president.

“My advice to the new president is be lucky,” Keller said as he talked about the struggles of being president when trouble arises at the University.

“I hope they look for a strong, experienced academic leader,” Bruininks said. “The first job of the president is to protect and advance the University’s mission.”

Ropers-Huilman said that communication with faculty governance will be key in the upcoming president’s administration.

“I think that administrators — even those with the best intentions and utmost integrity — are still human, and they can make mistakes,” Ropers-Huilman said. “I think that having faculty governance be a strong body that has active and regular communication with whomever we bring in as our next president will really be critical to the success of the institution going forward.”