With all U housing on the market, Doran makes Dinkytown purchase

Area property owners are monitoring the development firm’s moves, but Doran says he’s not planning huge changes to the properties. 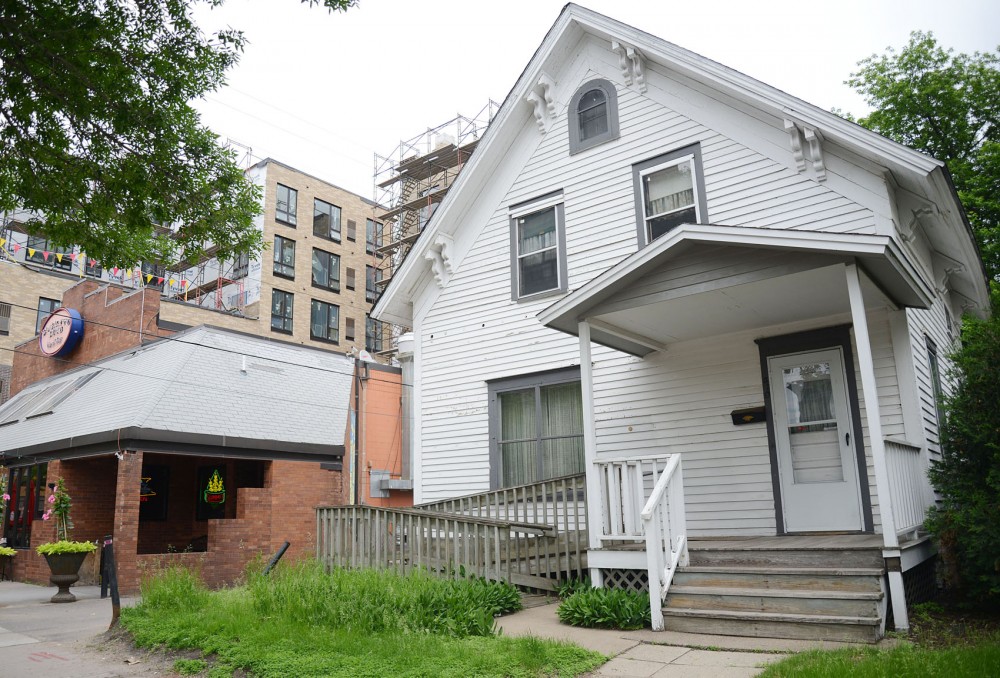 Doran Companies now owns a single-family house adjacent to Burrito Loco Bar & Grill after a $1.76 million deal late last month and the commercial building housing Publika Tea and Coffee Union. The development firm doesn’t have huge plans for changing the sites, but may move forward with bigger projects in the future.

After scrapping plans for a campus-area hotel, Doran Companies has now purchased two new Dinkytown properties and put its entire portfolio of student housing on the market.

The development firm recently paid $1.76 million for two properties that have caused a citywide stir for nearly a year, and it has listed all of its University of Minnesota-area housing for sale. Although the company is nixing its original plans for a hotel project in Dinkytown, property owners are keeping a close watch on Doran’s presence in the area.

The company now owns the commercial building at 1315 13th Ave. SE that houses Publika Tea and Coffee Union and a single-family house adjacent to Burrito Loco Bar and Grill. Both sites were part of the plot originally slated for the six-story, $25 million hotel.

The deal was made late last month —  about the same time the company decided to put about 1,100 bedrooms on the market.

Doran’s holdings that are now up for sale include the Knoll, 412 Lofts, the Edge on Oak, Sydney Hall, Dinkydome and the Bridges, which is set to open this fall.

‘Piece of the puzzle’

Doran said he doesn’t have huge plans for changing the recently acquired Dinkytown sites, but he’s open to moving forward with bigger projects down the road.

The development firm will keep the commercial building as it is, he said, while demolishing the house located at 410 13th Ave. SE to make way for new public parking.

Although planned changes to the properties are minor, some landowners are skeptical whether Doran’s hiatus in development will last.

Without owning the Dinkytown properties that are occupied by Hideaway, Mesa Pizza and other businesses, the development firm’s hotel plan couldn’t advance, which left Doran’s purchasing contract for the Dinkytown Mesa Pizza to expire last spring.

Hideaway owner Wally Sakallah, who opposed Doran’s hotel development, said he considered purchasing the Mesa Pizza site to stop the hotel’s construction but held back for another buyer, who he said plans to keep the building intact.

Irv Hershkovitz, the previous owner of the building housing Publika and University LifeCare, said he was originally against selling his property but later agreed to the deal when Doran presented his hotel idea.

“I thought that was such a good thing for Dinkytown,” he said.

Executive Director of the University LifeCare Center Dan Saad said Doran has already offered him an extension on his lease, which currently lasts until next year. Still, Saad said he wouldn’t be surprised if Doran decided to develop or sell the building in the future.

By the end of next year, city planners will release a study — inadvertently spurred by Doran’s hotel plans — determining the neighborhood’s historical value. Minneapolis city planner Haila Maze, who is working on the study, said the final presentation of the study will include renderings that show potential Dinkytown developments.

“I think [Doran] bought [the new properties] because it was a decent deal and … he was upset that everybody wouldn’t let him do his plan,” Hershkovitz said.

Doran said selling his University-area apartment complexes isn’t a top priority and that he’s listing the portfolio, which includes 619 units and 1,104 bedrooms, to test the waters for potential buyers.

“There’s a high probability those buildings won’t sell, or we won’t sell them,” Doran said.

Doran was one of the first developers to hone in on the University’s luxury housing market nearly five years ago, and his properties have stirred controversy ever since.

In addition to the contentious hotel project, Dinkytown community members protested Sydney Hall’s original plan for 14 stories in 2009 until Doran modified it to six stories.

Pillsbury said he’s not surprised the company is putting the complexes up for sale, as he’s noticed pushback in Dinkytown caused by developers who prioritize building quickly and inexpensively, paying too little attention to the buildings’ quality and effect on their
neighborhoods.

“A lot of the times [developers] sell their buildings to someone else,” he said. “But then we’re stuck looking at them for 40 years.”

Since starting construction on Sydney Hall in 2009, Doran’s company has broken ground on at least one new luxury housing property near campus every
year.

“We’re always looking for ways to enhance value,” Doran said. “And if there was a development opportunity that would allow us to do that, we’d certainly look at it.”