Nakamura walked-on to the program after two ACL injuries derailed his recruiting. 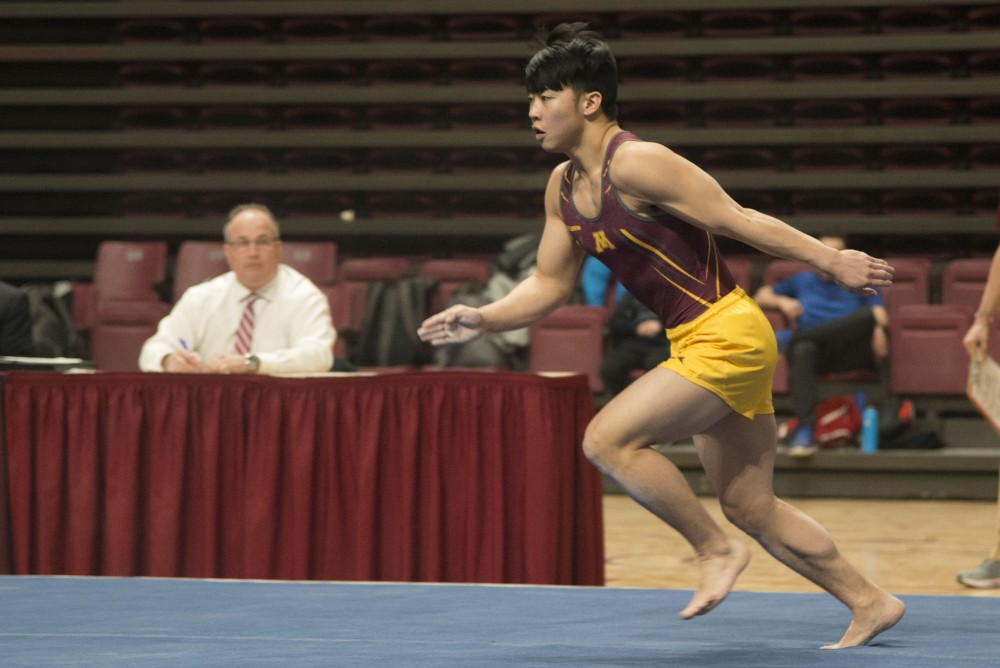 Freshman Eric Nakamura was sitting in Spanish class his senior year of high school when he got a life-changing phone call.

On the other end was Gophers men’s gymnastics head coach Mike Burns. Nakamura left class to answer Burns’ call and for the next hour the two chatted. They talked about the program, Nakamura’s gymnastics and, most importantly, an open spot for a walk-on on Minnesota’s roster. By the end of the conversation, Nakamura had the spot.

“I literally transferred everything to Minnesota within that class period,” Nakamura said.

Nakamura tore his ACL twice leading up to his recruiting. The injury scared off most schools, Nakamura said. He was headed to the University of Illinois with no guarantees, hoping to fight his way onto the roster. Minnesota offered him a guaranteed spot, which made his choice easy.

The San Diego, California native has adapted well in his freshman season. The team embraced him from the start.

Nakamura made an impact early on in the gym, something neither he nor Burns expected. Burns originally brought Nakamura to the team for his prowess on rings, but has been pleasantly surprised with his routines on the floor exercise. Nakamura was awarded Big Ten Freshman of the Week after taking the floor title against Iowa and UIC in early February, scoring 14.400. The performance is tied for the team’s second-best score this season with fellow freshman Mike Moran.

“Going into this year as a walk-on, I wasn’t expecting to do anything for the team,” Nakamura said. “This would be my year to develop and not really compete. When I started competing more, it was a surprise. I was really happy that the hard work is paying off.”

In the gym, the ultra-passionate Nakamura admitted he has a temper and can be hard on himself. Burns has noticed it and tried to help him get through the tough times and recognize his accomplishments.

However, outside the gym, Burns sees a different person.

“He’s a bit of a character, he’s kind of double-sided coin in some ways,” Burns said. “He’s got this very super charismatic approach to things and he’s funny and he knows how to laugh. Then sometimes he’s super serious about what he’s doing. It’s good that he can have both sides of that spectrum and get serious when he needs to, but also be lighthearted when he can be.”

Nakamura can be frequently found joking with teammates and taking over the team’s social media on road trips. Something he does to keep himself busy.