The 40-year agreement is expected to net the University millions of dollars annually. 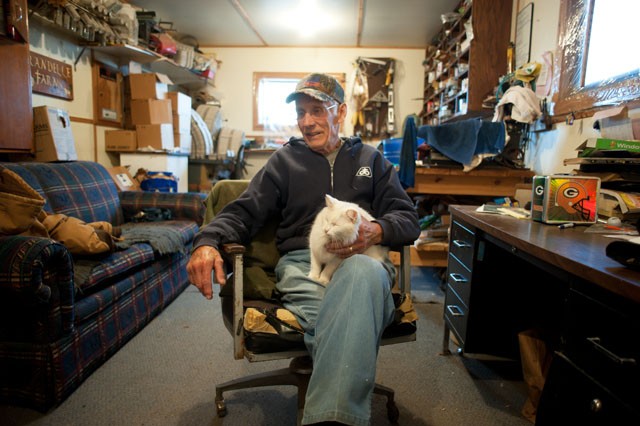 Richard Brand sits in the office of his farm that boarders Umore Park on Saturday in Rosemount, Minn.

Richard Brand is no stranger to change. His farm, which lies just outside Rosemount, has been around since the 1920s and is one of the last remaining operations on the border of UMore Park.
As the University of Minnesota prepares to lease one-third of the 5,000-acre UMore Park for gravel mining, Brand said he is sad to see the land altered.
âÄúThis is prime farmland,âÄù he said. âÄúMining it for gravel âÄî that does bother me.âÄù
On Thursday, the University Board of Regents will take a major step in the development of UMore Park when it authorizes a 40-year mining lease with Dakota Aggregates.
In addition to mining the land, UMore Development LLC, a private company spun off from the University to manage the park, plans to develop a sustainable community of 30,000 people at the site.
The mining authorization will net the University $500,000, with an additional $4.5 million in payments from Dakota Aggregates in installments over the next few months.
When the mining operation reaches full capacity in a few years, UMore Development President Charles Muscoplat estimated it will generate $3 million to $5 million in annual revenue.
That money will go to pay UMore Development LLC expenses, with leftover money flowing into the UniversityâÄôs Legacy Fund. The fund will support academic purposes currently underfunded by state and tuition dollars, Muscoplat said.
The LLC was established so the park could operate as a for-profit business and avoid confusion with the UniversityâÄôs non-profit mission, he said.
Although the University could have sold the land to a mining company, he said that by leasing the rights, the University will make more money and can use the land for other purposes in the future.
The lease will cover the mining of the nearly 170 million tons of black dirt, clay, sand and gravel located on 1,722 acres covering the western third of UMore. The University will receive royalties on the aggregate.
The mining rights will generate an additional $2 million to $3 million over the course of the lease, for a scholarship fund for students studying civil engineering, geology or land-use planning.
There are still a few hurdles for UMore to clear before mining can begin, including changing a Rosemount city ordinance and getting mining permits from Rosemount and Empire Township.
Muscoplat said mining could start in the spring, but depending on when permits are received, it could take a year.
Rosemount Mayor Bill Droste said the city is developing the ordinance and permitting process after getting feedback from city staff and residents.
âÄúWe had 10 pages of comments regarding issues âÄî concerns about the noise, dust and [truck] exits and entrances,âÄù he said.
The University held two public meetings to gather concerns, and Muscoplat said the LLC has agreed to move mining operations farther from houses at the request of residents.
With typical gravel mines, issues arise with dust, stormwater run-off, noise and traffic, said Jim Kolar, senior pollution control specialist with the Minnesota Pollution Control Agency.
While these issues could damage the environment and the residentsâÄô quality of life, the effects can be minimized with basic mitigation like limited trucks and hours of mining and using water for dust-control, Kolar said.
At ThursdayâÄôs regents meeting, the board will review the mining operationâÄôs Environmental Impact Statement. They will vote on a resolution affirming that the University will mitigate any negative environmental impacts from mining, Muscoplat said.
Community concerns Mining and developing UMore Park could generate additional tax revenue for Rosemount. But for some residents, the plan remains unsettling.
For Kurt Hansen, longtime Rosemount resident and prominent business owner, problems with the UMore site started more than 60 years ago when the government built an ammunition plant on the land during World War II.
After the war ended, rather than giving the land back to the farmers, the federal government sold it to the University for $1, Hansen said.
âÄúThat was a big kick in the face to the citizens of Rosemount because that land has been out of the city of RosemountâÄôs control for all these years,âÄù Hansen, a former University veterinary employee, said.
Hansen said he is worried the University hindered the cityâÄôs growth by controlling the land for so long.
âÄúWe canâÄôt do anything east of Rosemount because there sits the University of Minnesota with all this land,âÄù he said. âÄúFor 60 years nothingâÄôs been going on. Something should have been done.âÄù
While the city may not have been benefitting from UMore Park since the federal government took over, Mayor Droste said that wonâÄôt be the case much longer.
âÄúToday it generates no tax dollars,âÄù he said. âÄúOnce that land is âÄ¦ developed it will come on the tax rolls just like any other piece of property within the city.âÄù
Hansen expressed concerns about the lack of community involvement throughout the planning process, noting that no Rosemount officials are on UMoreâÄôs nine-member board of governors.
âÄúI find that disturbing,âÄù he said.
Kurt Bills, the newly elected state representative for District 37B, which includes Rosemount, said he has been satisfied with the UniversityâÄôs openness and attempts to include the public.
Since the University owns the land, it has the right to use it as it sees fit, said Bills, a former city council member.
âÄúI have my wish list for this land âÄî but itâÄôs not mine,âÄù he said. âÄúI wish we could go back to the post-war period and make sure the farmers were able to re-acquire it.âÄù