Minnesota opens season on the road

The Gophers will not play a game at Siebert Field until mid-March. 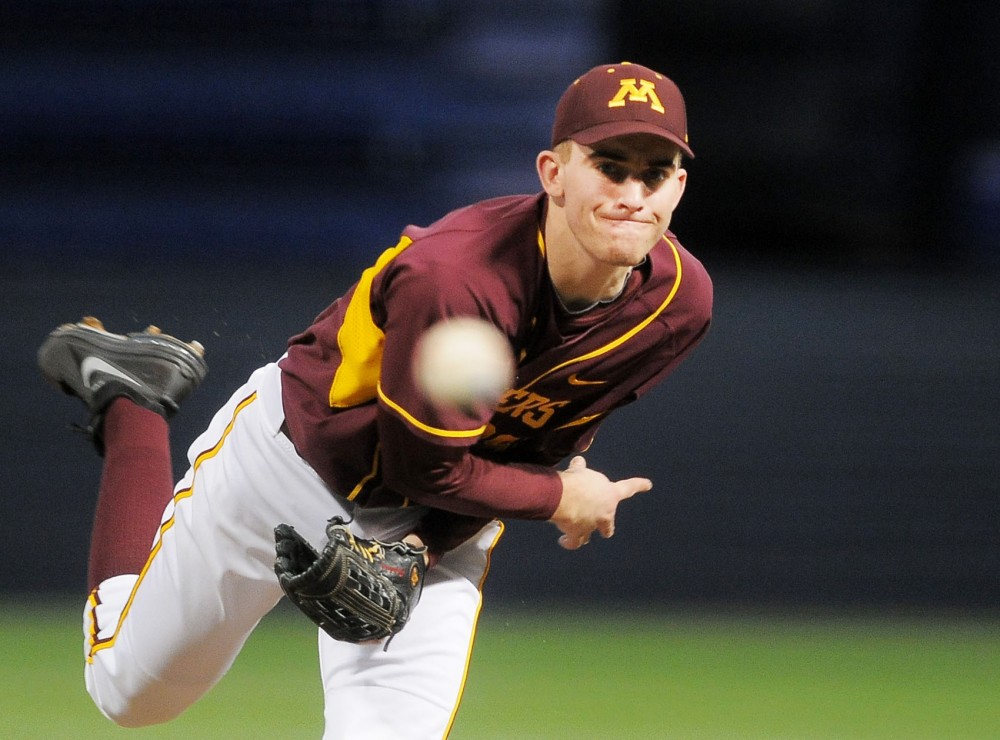 Minnesota's Ben Meyer pitches against Western Illinois on Saturday, March 9, 2013, at the Metrodome.

With snow covering the ground in Minneapolis and the Metrodome in the midst of being torn down, the Gophers baseball team will head south this weekend to kick off its season.

For the next five weekends after that, they’ll commute back and forth between Minnesota and warm-weather climates suitable for baseball this time of year.

“It is what it is. You have to embrace it,” head coach John Anderson said. “We’re in the frozen tundra here, and we’re trying to start the baseball season on Feb. 14.”

The Gophers will play in Arizona, Florida, Louisiana, South Carolina, California and Illinois before playing a game at Siebert Field.

The intense travel schedule has the team playing games Friday, Saturday and Sunday, then returning late Sunday night before leaving on Thursday again.

The Gophers know it’ll be tough, but it’s something they’re prepared for.

“We’re going to be traveling and playing more than we’re actually going to be here throughout the course of the week,” sophomore second baseman Connor Schaefbauer said. “It’s going to be a grind, but it’s also going to be a lot of fun.”

“As long as we just stay on top of our schoolwork, I think it’ll be fine,” junior starting pitcher Ben Meyer said. “I’m looking forward to traveling and seeing all these new places and getting some warm weather.”

The demolition of the Metrodome doesn’t just mean more road trips early in the season — it also moves practices from a baseball setup to the Gibson-Nagurski Football Complex.

“We have to make the best of it,” senior catcher Matt Halloran said. “I think we’ve definitely done the best we can to get as prepared as we can for the first games.”

Minnesota will take on Northern Illinois this weekend in Glendale, Ariz., to start the season.

Anderson said the team prepared for those losses.

“We’ve tried to recruit and tried to stay a year ahead … and have people in the wings ready to step in here,” he said.

As it has been in years past, pitching should be a strong point for Minnesota, even with the departures of Snelten and Windle.

Senior righty Alec Crawford will be the team’s Friday starter, followed by sophomore lefty Jordan Jess on Saturday and Meyer on Sunday.

“I think it’ll really help me this year just kind of knowing how to get into my routine … and how to prepare my body to get ready for the next outing each week,” Meyer said.

Anderson said the team feels good about its pitching but needs more production at the plate.

The Gophers were near the bottom of the Big Ten last season in runs scored, but Anderson said this team has more promise offensively.

Schaefbauer, whose .279 batting average is tops among returners, said the team has been focusing a lot on hitting.

“Being able to hit … when we need to move a guy over, get a guy in — things like that that we haven’t done in the past — has hurt us,” Schaefbauer said. “We’ve put more focus on that as hitters.”

If the team can score about four runs per game, Anderson said, it should be successful.

“If we can do that, I think our pitching will be strong enough that we can win some games that way,” he said.