North Dakota presented a challenge for the No. 1 Gophers, but it wasn't enough. 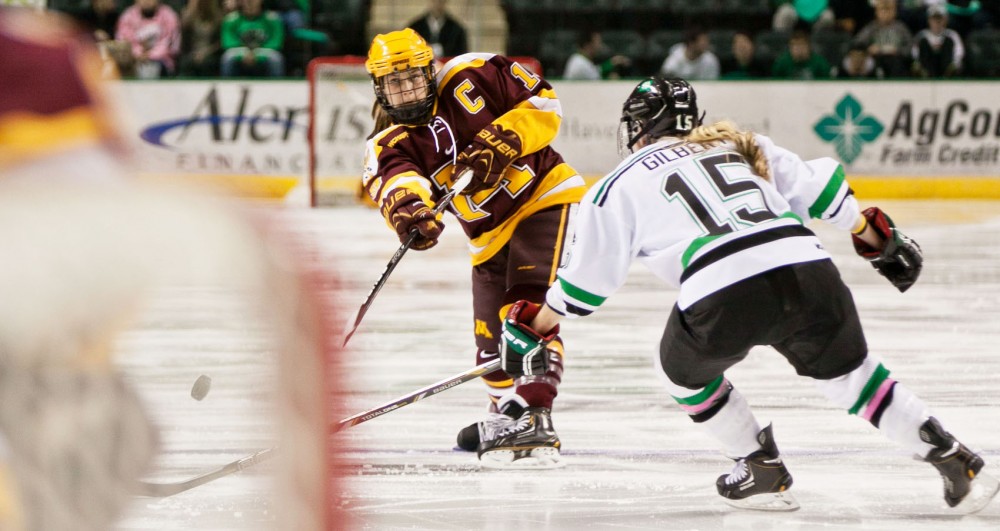 Head women’s hockey coach Brad Frost said before the Gophers left for Grand Forks, N.D., that this weekend would be a good “measuring stick” for his team.

He was right. At times this weekend against North Dakota, Minnesota wasn’t as dominant as has been earlier in the season. But it still swept North Dakota, the eighth-ranked team in the country.

“They’re a lot better than what we’ve seen,” sophomore forward Rachael Bona said. “But I don’t think it was anything that we weren’t expecting or that we couldn’t handle.”

The Gophers won 5-1 on Saturday with an onslaught of goals in the third period and 4-2 on Sunday.

“[We] faced some adversity throughout the weekend, and we were able to play really well,” Frost said. “We swept a really good hockey team on the road.”

North Dakota controlled the first period Saturday. It outshot the Gophers 10-5, and Frost said they were “allowing North Dakota to dictate play.”

“It was just a terrible start,” he said.

Goalie Noora RÃ¤ty made multiple nice saves to keep the score tied, including an impressive glove save while lying on her side on a shot by North Dakota’s top scorer Jocelyne Lamoureux.

“Noora was huge. She kept us in there,” Frost said. “[She] kept us at 0-0 and allowed us to get our feet under ourselves a little bit.”

North Dakota and Minnesota each scored within the first minute of the second period.

It wasn’t until just less than 10 minutes left that Minnesota really broke the game open.

Bona scored the game-winner 12:30 into the third period. Bona said she thought getting a goal sparked the team.

Her goal opened the floodgates for Minnesota, which then added goals from freshmen Milica McMillen, Brook Garzone and Hannah Brandt.

The four-goal third period came without the Gophers top goal-scorer Amanda Kessel, who was scratched with a lower body injury.

Kessel had hip surgery in the offseason, but Saturday was the first game she had missed all season.

Frost said Kessel didn’t practice much in the week leading up to the games. He said although she skated in the warm-up Saturday, the team felt it was best to keep her out.

On Sunday, Kessel returned and made her presence known immediately, scoring just 1:24 into the game. She skated around a defenseman from near the boards and found the five-hole.

Kessel added her second goal to give the Gophers a 2-1 lead at the 12:52 mark in the second period when she backhanded a pass from Mira Jalosuo off a solid read by Jalosuo.

“Mira’s pretty good at finding people like that,” Kessel said. “I had this feeling that it was going to get to me, but I was still surprised when it did because it was just a great pass by Mira.”

Kessel also assisted on a goal by Kelly Terry in the second period.

Kessel said she was “feeling good” after Sunday’s game and she had been skating at around “80 to 90 percent.”

“She just makes everything go for us offensively, both 5-on-5, 4-on-4, but with our power plays as well,” Frost said. “She stabilizes our lineup up top.”

The Gophers got the sweep, but Bona said she thought battling back from a slow start helped bring the team “back down to earth.”

“We were beating teams by a lot, and that’s not going to happen all the time,” she said.

The two teams entered the series tied for first in the WCHA with 12 points; the Gophers now sit alone in first place.

“Those were six big points that we needed and that we took from them,” Bona said.