The Gophers carried a five-game win streak into conference play. 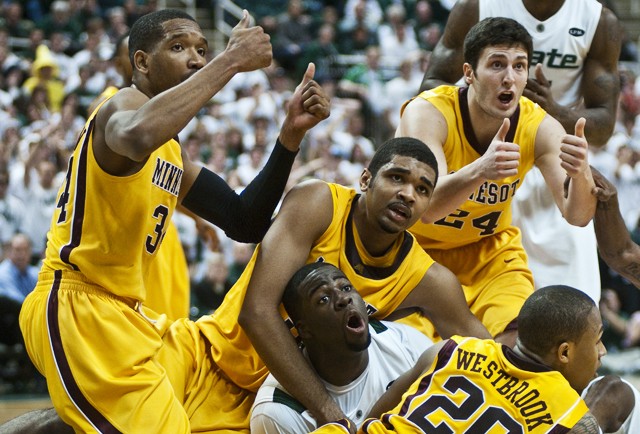 Gopher players scramble to try and force a jump ball while Michigan State tries to call a quick timeout on Wednesday during a game at Breslin Center.

While the Gophers menâÄôs basketball team is just entering the middle of its Big Ten schedule, the team has already seen top conference foes. Minnesota suffered road losses to Michigan State and Purdue, picked to finish first and second, respectively, in the Big Ten preseason media poll. The Gophers won at home against Ohio State, picked to finish third. Junior guard Blake Hoffarber scored a career-high 27 points against the Buckeyes. That performance was just the latest of HoffarberâÄôs heroics, as he led Minnesota in scoring in each of its five consecutive wins to end the nonconference schedule. The Gophers finished 9-3 in nonconference games and opened Big Ten play needing 11 wins to give coach Tubby Smith his 17th consecutive 20-win season. Minnesota will have a rematch against Michigan State on Saturday and will have another at Ohio State on Jan. 31. Some highlights of games since mid-December: Dec. 15: Gophers 89, Northern Illinois 48 Hoffarber scored a then-career-high 26 points and set a Gophers single-game record by making eight 3-point field goals in a victory over the Huskies at Williams Arena. âÄúMy teammates were finding me, and I just kind of felt like I couldnâÄôt miss there for a little bit,âÄù Hoffarber said after the game. âÄúThe rim definitely felt a little bigger today.âÄù On Dec. 21, Hoffarber became the first Gophers player in nearly two years to be named Big Ten Player of the Week. Dec. 29: Gophers 75, Penn State 70 In the Big Ten opener, senior guard Lawrence Westbrook tied a career high with 29 points to win a duel at Williams Arena with Penn StateâÄôs All-Big Ten guard Talor Battle, who scored 23 points to lead the Nittany Lions. âÄúThe Big Ten season is where all the men play,âÄù Westbrook said. âÄúIf youâÄôre a player, you step up and you make plays. IâÄôve been waiting for this game for a long time; I couldnâÄôt even sleep [the night before].âÄù The Gophers honored the 1989-90 Elite Eight team in an on-court halftime ceremony. The sellout crowd gave a standing ovation to the former players and former coach Clem Haskins, who was invited onto the court by current Gophers coach Tubby Smith. Jan. 5: No. 4 Purdue 79, Gophers 60 Junior forward Paul Carter helped give Minnesota a 24-20 lead with 6:36 to play in the first half, but the Boilermakers responded with a 12-0 run to take the lead for good at Mackey Arena in West Lafayette, Ind. Four Boilermakers scored at least 15 points to keep Purdue undefeated. The Gophers were doomed by their worst single-game shooting percentage of the season. âÄúWe just let them kind of pressure us out of our offense,âÄù junior point guard Al Nolen said. âÄúWhen shots arenâÄôt falling, guys got to look to get aggressive and take it to the rim, and I donâÄôt think we did that tonight.âÄù Sophomore center Ralph Sampson III sat out his second game with an ankle injury. He returned to play in MinnesotaâÄôs 73-62 home win against Ohio State on Jan. 9. Jan. 13: No. 7 Michigan State 60, Gophers 53 The Gophers held the Spartans to their lowest shooting percentage of the season but squandered a 19-15 first-half lead. Minnesota later cut a 40-29 second-half deficit to 51-49 with 5:10 remaining in the game. Westbrook, who scored 12 of his 15 points in the second half, missed a potential go-ahead 3-pointer with 4:40 to play. It was still a one-possession game entering the final two minutes, but Minnesota committed three turnovers and had only three shot attempts in its final five possessions. âÄúWe had some breakdowns there at the end that were uncharacteristic,âÄù Smith said. âÄúWe had some turnovers there that mightâÄôve been because of fatigue.âÄù The near comebacks may continue to play out as the storyline of this season, but Westbrook said the Gophers need to change their intensity. âÄúWeâÄôve got to find a way to be tougher,âÄù said Westbrook, who committed five of his teamâÄôs 15 total turnovers. âÄúThatâÄôs what it is with us all the time.âÄù