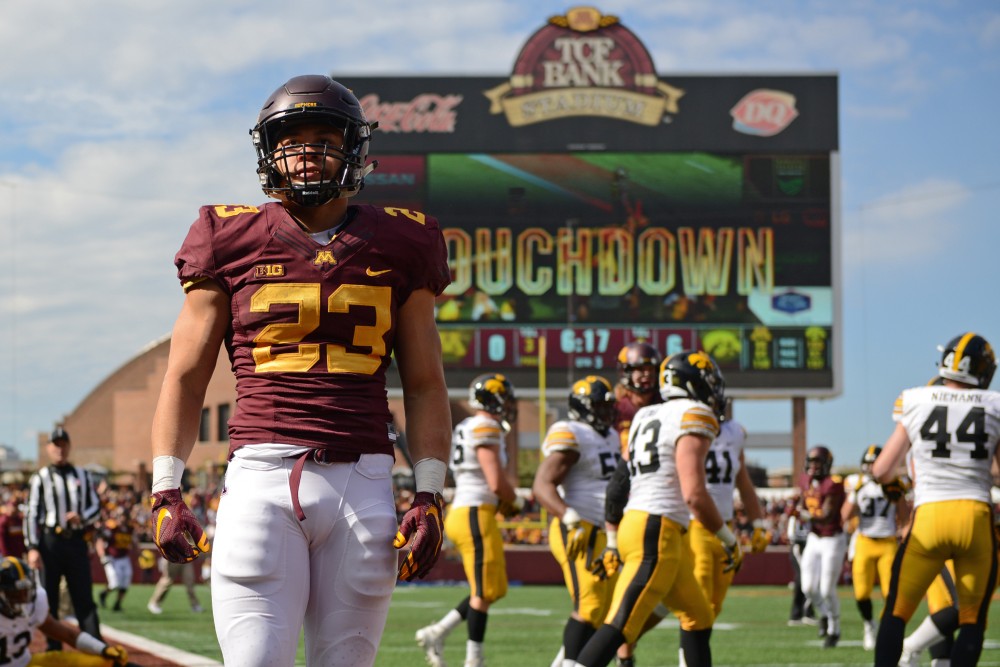 Gophers running back Shannon Brooks after scoring the Gopher's only touchdown of the game at TCF Bank Stadium on Oct. 8, 2016.

It was late in the game and Minnesota was up by 14, but Rodney Smith decided that the Gophers weren’t done.

The redshirt sophomore running back broke through Maryland’s defensive line and dodged a defensive back to walk into the end zone for a 70-yard touchdown, his second of the day.

The score put the Gophers up 24-3 in the fourth quarter, and they held that lead for a 31-10 win at Maryland, despite injured starting quarterback Mitch Leidner being out for the game.

“It’s tough to win on the road, especially when you go with a backup quarterback,” head coach Tracy Claeys told reporters. “Our kids believed in him and they did what they needed to do on offense for us to win. Upfront we blocked better and created a few more seams to let our backs do what they need to do.”

Smith and running back Shannon Brooks combined for 230 yards on the ground and two touchdowns. Brooks also had a 17-yard touchdown reception 14 seconds before the end of the first half.

Quarterback Conor Rhoda made his first career start and threw for 82 yards on 15 attempts with one touchdown.

“I felt good once I got out there and took a couple hits,” Rhoda told reporters. “Everything settled in from there and we got things cooking on offense.”

While the Gophers running game shined, their defense had an equally impressive game and held the Terrapins (4-2, 1-2 Big Ten) to one touchdown, created four turnovers and scored a pick-six.

“We’re just starting to get all our guys back and the secondary healthy to do some of those things that we’re trying to do,” Claeys told the media. “I think they’re getting more comfortable and that’s why they’re playing more aggressive and getting faster.”

Brooks’ 17-yard touchdown reception put the Gophers up 14-0 at halftime. Their first touchdown of the day came from Smith, who scored on an 8-yard touchdown run with 13:27 left in the second quarter.

Smith finished the day with 144 rushing yards, two touchdowns, and one reception for 10 yards. His 144 yards were a new career high for Smith in a game, while the two touchdowns tied a career high.

“[Smith] has been patient about it all season,” Brooks told reporters. “Even last season we were motivating him saying ‘come on you have to break one’ so it was good and fun as a teammate to see.”

Just as Minnesota was without its starting quarterback, the Terrapins were without their regular starter, Perry Hills.

Hills was questionable to play before the game after sustaining a shoulder injury in Maryland’s game on Oct. 8 against Penn State.

Quarterback Tyrrell Pigrome took his spot, and threw for 161 yards on 18 completions of 37 attempts with two interceptions.

“They’re very similar with the quarterback running game,” Claeys told reporters. “[Our] defensive staff did a good job planning for both quarterbacks.”

Maryland came into the matchup with an average of 274 rushing yards and 3.2 rushing touchdowns a game.

The Terrapins were held to 130 yards on 36 rushing attempts with one fumble by Pigrome. Running backs Lorenzo Harrison and Ty Johnson had nine attempts for 58 yards as Pigrome did the majority of the running.

Maryland’s only touchdown of the day was an 11-yard pass from Pigrome to wide receiver D.J. Moore to bring the Terrapins within 14 with 5:42 left in the fourth quarter.

“We tried to play as many of our small guys on the perimeter that we could against Tyrrell because he’s like a water bug,” Claeys told reporters. “He’s hard to tackle so we wanted quicker guys to keep him contained and make him go back towards the middle and take as many hits as he could.”

Pigrome and the Terrapins were marching down the field again, threatening to make it a 7-point game with over a minute left in the fourth quarter.

The interception was Winfield’s first of his career and the Gophers’ first defensive touchdown of the season.

“Defensively, we continue to play aggressive and get after people and so it’s good to get the first Big Ten win on the road,” Claeys told reporters. “Hopefully it’s a good start and we can keep it going.”