UMN research aims to treat cancer in dogs and humans

Researchers on the study have proven that their treatment methods can increase the lifespan of canines by 16-18 months. 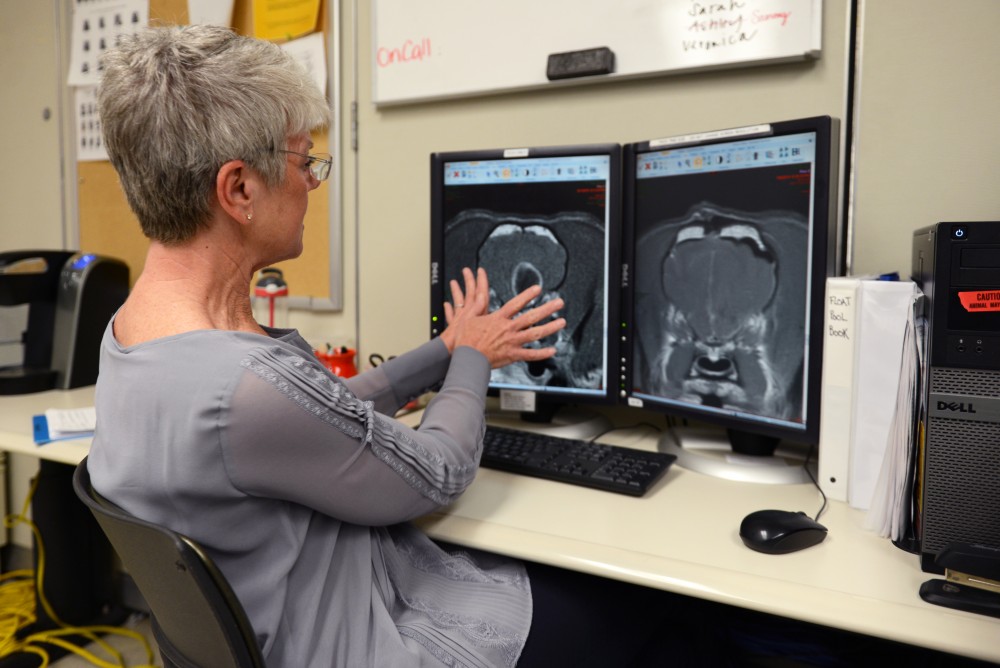 Liz Pluhar sits in front of a computer showing an MRI of a tumor found in the frontal lobe of a Boston terrier before and immediately after surgery on Wednesday, Jan. 17.

Researchers hope a new University of Minnesota study will create better brain cancer treatment for both dogs and humans.

The five-year project, funded by a $2.7 million National Institutes of Health grant, is currently accepting applications for dogs with glioblastoma for clinical trials. They currently have funding for the treatment of at least 30 dogs.

Glioblastoma — an aggressive form of brain cancer — can kill canines in as little as a month without treatment, and humans usually don’t survive after 14 months, said Clinical Research Coordinator Susan Steinmetz from the Mayo Clinic.

The cancer, which affects both children and adults, is treated with radiation, chemotherapy and targeted drug therapy, Steinmetz said. However, the tumor often returns even after various forms of therapy, she said.

Researchers on the study have proven their treatment methods can increase the lifespan of canines by 16-18 months, said lead researcher and College of Veterinary Medicine professor Liz Pluhar.

Extending survival time by even one month is an achievement, Pluhar said. She hopes they’ll see similar results in humans, as humans and canines are very similar — they are the only two species that spontaneously develop glioblastoma tumors.

Dogs are a close model of the disease in humans, said collaborator Matthew Hunt, from the University’s Department of Neurosurgery.

“This study bridges the gap where mouse studies don’t have a great track record,” said Hunt.

When scientists tried to replicate glioblastoma in mice, less than 10 percent of humans responded to the same treatment, Pluhar said.

“Dogs eat, sleep and live with us. Their daily lives are intertwined with us, which makes them more like us than other species,” Pluhar said.

The new research project will use a combination of immunotherapy with a peptide, which is a compound that stops the brain tumor from protecting itself from the body’s immune response.

The researchers hope this study will demonstrate that the combination of vaccines and the peptide, as well as gene therapy in pet dogs with glioblastoma, will be effective in treating the brain cancer.

Pluhar said as a veterinarian, she enjoys conducting studies with canines because she helps the dogs live as long as possible while obtaining vital information to aid human cancer treatment.

If humans respond to the treatment like dogs, this would be “the biggest advance in treating brain cancers,” Pluhar said.