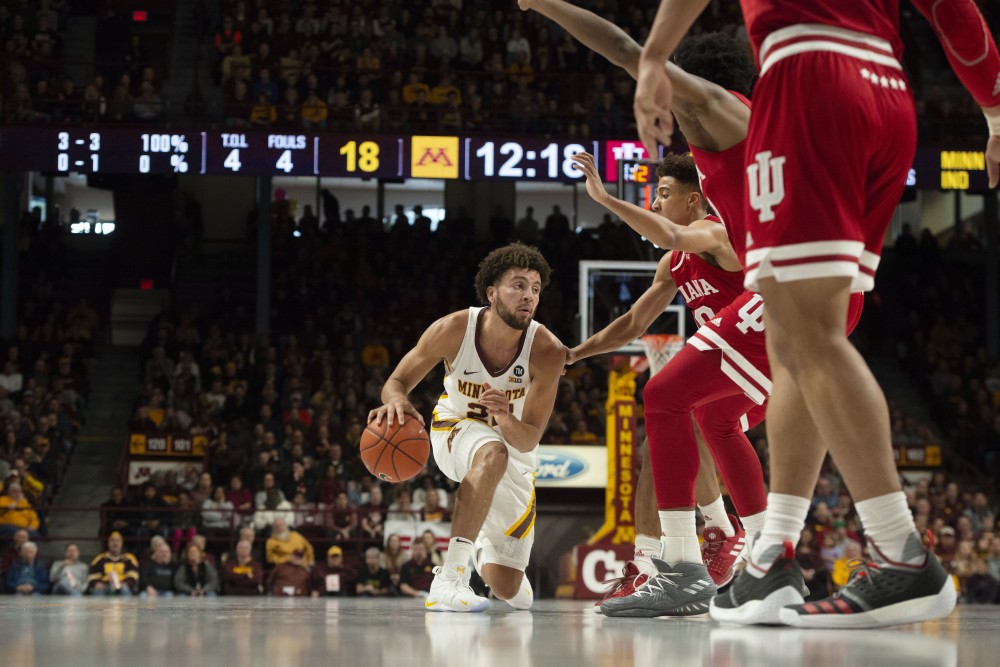 On Saturday, Minnesota once again had the opportunity to snap its losing streak against another struggling Big Ten opponent.

Indiana came into Williams Arena having lost nine of their last 10 games, while the Gophers dropped their last four contests.

“We played well, obviously, [from] start to finish,” head coach Richard Pitino said. “I thought we responded extremely well from a devastating loss at Nebraska. We didn’t feel sorry for ourselves, we didn’t whine, we didn’t complain, we just moved on.”

Much like the game on Wednesday against Nebraska, Minnesota started fast and built a double-digit lead in the first half. Despite struggling with outside shooting all season, the Gophers knocked down their first four 3-point attempts and seven of their first nine field goals overall.

“I was really upset after that game,” Pitino said of the Nebraska loss. “There’s only one thing you can do … play angry. We have to create our own luck. I thought tonight we did that.”

The hot start didn’t last. Minnesota continued to struggle with consistency offensively, and during a stretch midway through the half, the Gophers went six minutes without a field goal. However, thanks to a combination of getting to the free-throw line and good defense, they were able to maintain their lead and held a 12-point advantage at halftime.

Senior Jordan Murphy wasted no time in making his presence felt. His teammates fed him in the low-post early and often, allowing him to finish strong at the rim and get to the foul line. Murphy totaled 17 points in the first half, shooting 5-8 from the field and 7-11 on free throws in the period.

“It was amazing what he did,” Pitino said. “He’s an understated kid, so he probably doesn’t get the respect he deserves. Great will, great heart, great durability. He’s been really reliable.”

Within the first eight minutes of the second half, the Gophers doubled their lead to 24. They continued to connect on shots from beyond the arc. Despite entering the game as the worst 3-point shooting team in the Big Ten, Minnesota connected on 12 of its 22 attempts from beyond the arc on Saturday. With the outside shots pouring in, the result was not in question down the stretch.

“It opens up a lot,” freshman Gabe Kalscheur said of the 3-point shooting. “Especially for [freshman Daniel Oturu], [Murphy] and [redshirt sophomore Eric Curry] in the post. When [defenders] come out at us, we can get it back into the post.”

Oturu also got in on the fun, knocking down the first 3-point attempt of his college career as the shot clock expired with 16:11 in the first half. This gave the Gophers a lead they would not relinquish. Oturu finished with seven points before fouling out with 9:12 left.

“There were three seconds [on the shot clock], it went in,” Oturu said of his 3-pointer, adding a smile and a fist-pump.

Minnesota will have the opportunity to knock off a ranked opponent on Thursday when it hosts No. 6 Michigan. The Wolverines defeated the Gophers 59-57 on a buzzer-beater Jan. 22 in Ann Arbor.

“We don’t believe in moral victories,” Oturu said. “We realized we’re good enough to play with anybody in this league, we just have to figure out how to close out those kinds of games.”