Minnesota clinched a 90-89 victory over Iowa on Friday. 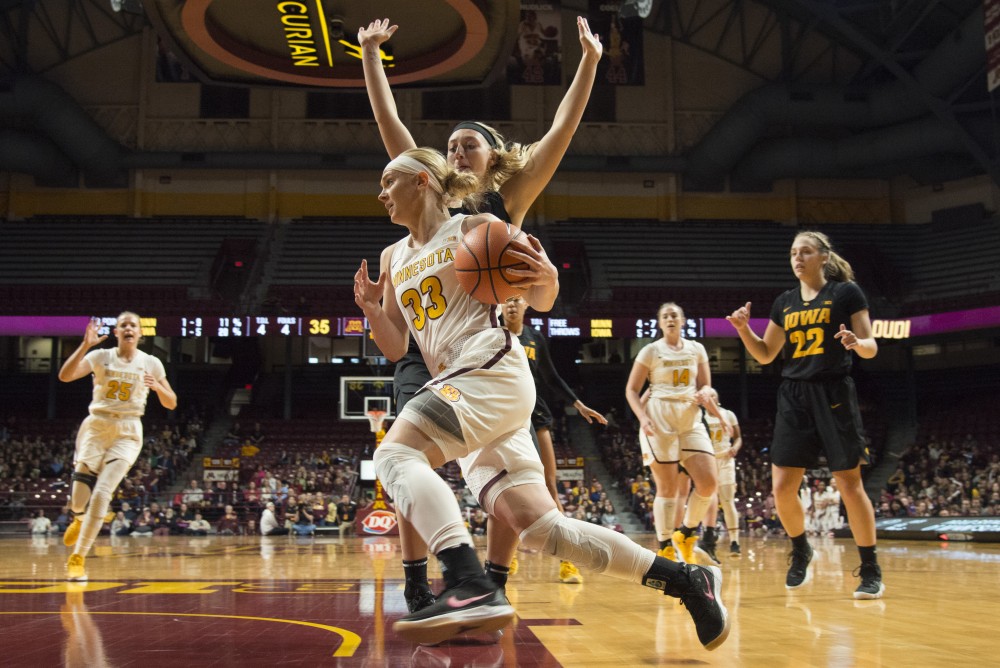 Senior guard Carlie Wagner runs the ball during a game against Iowa at Williams Arena on Jan. 21, 2018.

The Gophers narrowly escaped with a victory against Iowa that will send them to the Big Ten semifinals.

Minnesota (23-7, 11-5 Big Ten) played at Bankers Life Fieldhouse on Friday afternoon in Indianapolis. The team looked to continue their season with a win against Iowa to move on to the semifinals in the Big Ten women’s basketball tournament.

After a back-and-forth final quarter, the Gophers came out with a 90-89 win over the Hawkeyes (24-7, 11-5 Big Ten) to advance to the final four teams in the tournament.

“I’m so excited that we’re in the semifinals. It’s been 13 years,” head coach Marlene Stollings told reporters. “We didn’t put pressure on the team going into this game. I certainly think this win should put us in the tournament.”

The final quarter was a one possession game for the entire 10 minutes. As the clock ticked down, Iowa’s Megan Gustafson and Minnesota guard Kenisha Bell alternated finding the net, keeping the intensity high.

With 10 seconds remaining on the clock and the Gophers leading by one point, the Hawkeyes had possession of the ball. Minnesota was careful not to foul and kept the pressure high. The team ran down the clock and forced a Gophers’ victory, advancing them to the semifinals in the Big Ten tournament.

Carlie Wagner and Bell led the Gophers in scoring, tallying a combined 53 points in the game.

Throughout the four quarters, Gustafson proved to be a huge problem for the Gophers. She scored 48 points throughout the entire game setting both an Iowa and a Big Ten tournament record. Gustafson leads the nation, averaging 25.3 points per game.

Minnesota did its best to protect the net, however Gustafson continually found it throughout the game.

“[Gustafson] was scoring really well on the same moves and I think we should have guarded her a little differently,” Bell told reporters. “But she is a good player and it’s kind of hard to defend something like that.”

Earlier in the regular season the Gophers played the Hawkeyes twice. The first game resulted in a five-point victory for Minnesota with a score of 77-72, while the second encounter ended with an Iowa win of 92-84. The Gophers knew heading into the game that it would be a tough match-up and they looked to break the tie

Minnesota entered the second half leading Iowa by three points, however the Hawkeyes snagged their first lead with one minute remaining in the quarter. They continued their lead into the remaining quarter with a lead of 65-63, forcing the Gophers to play catch up in the fourth.

After Friday afternoon’s victory, Minnesota will take on Ohio State on Saturday. With No. 13 Ohio State first in the Big Ten, the Gophers anticipate Saturdays matchup to be tough. Minnesota encountered the Buckeyes earlier in the regular season, falling to them 91-75.

“We’re feeling real good right now. This was a great momentum booster for heading into our game against Ohio State tomorrow,” Wagner told reporters. “Knowing how gritty we can be and how tough we can battle, it’s just good to have that mentality going into the semifinals.”