Life Soundtracked to The 1975? Yes, Please 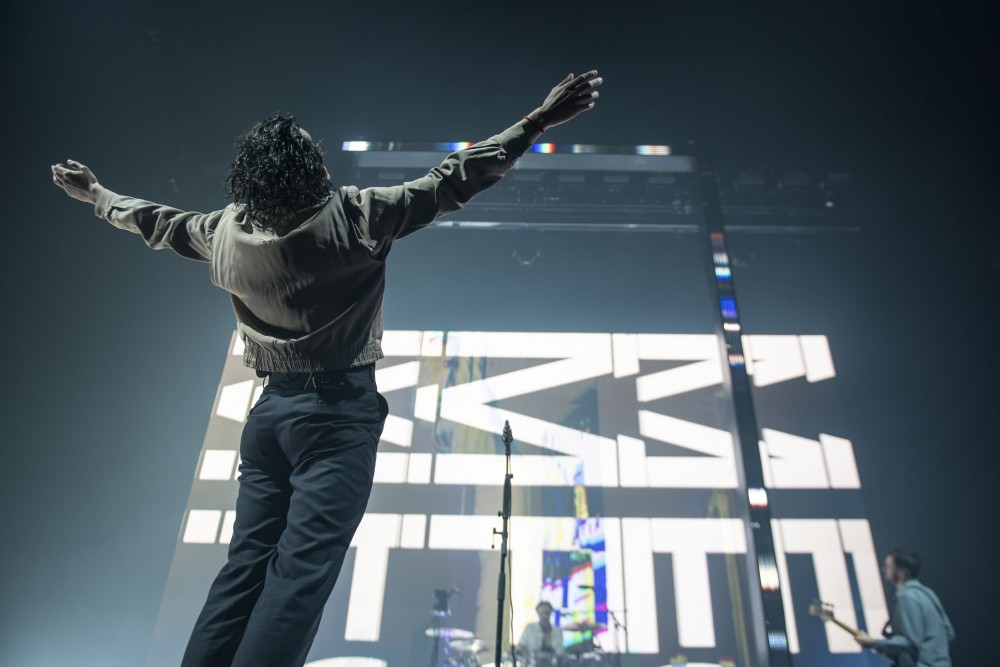 Matty Healy of The 1975 listened to the music as he came on stage on Tuesday, May 7 at The Armory in Minneapolis. The 1975 played a sold out show.

Attendees began lining up outside the Armory early on Saturday, hoping to get as close as possible to The 1975 for their sold-out show.

But before the long-awaited English pop band’s entrance, Filipino artist No Rome brought out major energy with synth vibes and dance-worthy music. With hits like “Seventeen” and “Do It Again,” the crowd cheered while listening to who they call ‘Rome.’

On next was British band Pale Waves, who’ve toured with The 1975 before.

As The 1975’s entrance got closer, the music got louder and the Armory’s lights began to fade. Finally, they cut to black.

The crowd went wild when they caught the first glimpse of drummer George Daniel leading the way, followed by guitarist Adam Hann, bassist Ross MacDonald and finally frontman Matthew “Matty” Healy, who walked right to the front of the stage, sticking his tongue out at the crowd.

The band is known to open up with powerful songs, and this performance wasn’t any different. “Give Yourself a Try” erupted from the speakers. It seemed as if everyone in the room was screaming along with the band. “TOOTIMETOOTIMETOOTIME,” a song about cheating while in a relationship, came on next. If you stood still, you could feel the floor shaking from the crowd.

“Love It If We Made It” sums up recent current events, invoking images of refugee crisis, the rise in police brutality toward people of color and Donald Trump’s presidency. Healy’s tongue continued to make appearances throughout the night.

Songs came from their debut album, “The 1975,” their sophomore album, “I Like It When You Sleep, for You Are So Beautiful Yet So Unaware of It,” and their latest album, “A Brief Inquiry into Online Relationships.” Their latest was influenced by current political drama, as well as Healy’s romantic life and his battles with addiction, according to an interview he did with Pitchfork in 2018.

As the show starting coming to an end, the band played a few of their more politically driven songs, such as “I Like America & America Likes Me,” brandishing lyrics like “kids don’t want rifles, they want Supreme.”

The band left the stage after “Love It If We Made It,” drawing the crowd to its loudest. “Chocolate,” “Sex” and “The Sound” rounded up the show, leaving the room buzzing long after the band exited. We’re already awaiting their return.