The proposed amendments would give animal control officers more power. 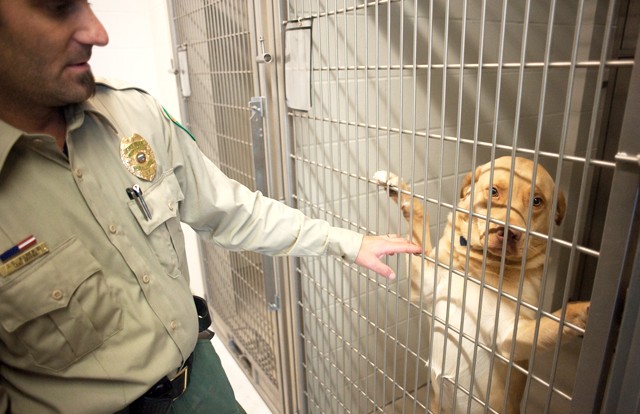 Hoppy, a vicious Minneapolis resident, was on death row over the summer after launching herself from her yard onto the sidewalk, attacking unsuspecting dogs and their owners twice in two years. Luckily for Hoppy, itâÄôs easier to ditch the chopping block when youâÄôre a cat, and her owner was able to negotiate a pardon. This and several other cases pushed Minneapolis Animal Care and Control to request heightened authority, including the ability to dole out fines to owners of unruly pets. âÄúThereâÄôs been some cases of cats that have been particularly nasty,âÄù Ward 5 Councilman Don Samuels, who introduced the requests to City Council, said. âÄúPeople are caught by surprise; they donâÄôt expect that from a cat.âÄù The proposed amendments would give animal control officers the right to issue fines for attacks that occur on private property. Currently, fines can only be given for attacks that occur on public property. Dan Niziolek, manager of Minneapolis Animal Care and Control, said the ability to give fines on private property would be helpful if one tenantâÄôs dog attacks anotherâÄôs on a rental property or if a dog attacks a mail carrier on private property. âÄúWe wanted to make it fair across the board that if you have an animal that does some harm, that the citation is being issued regardless of public or private property,âÄù Lori Olson, deputy director of environmental management and safety, said. The proposed changes come as the number of animals declared dangerous and potentially dangerous by Minneapolis Animal Care and Control is on the rise. So far this year, 216 animals have been declared dangerous or potentially dangerous and 19 have been ordered to be killed. In 2008, 213 animals were declared dangerous or potentially dangerous and 55 were killed. In 2006, the numbers were much lower, with 70 dangerous or potentially dangerous animals and only one killed. Of those cases, the vast majority have been dogs, although there have been âÄúa couple infamous cats over the years,âÄù Niziolek said. The changes would also include allowing officers to determine whether an animal is dangerous or potentially dangerous to tailor the requirements to the circumstances of each case rather than stick with the guidelines laid out in city ordinance. Other changes would include ordering the offspring of dangerous or potentially dangerous animals be spayed or neutered and an increase in certain permit fees. Each year, the department has to update its paperwork, Web site and mailings, but with the relatively small number of permit holders, they arenâÄôt recovering much of the cost, Olsen said. Minneapolis Animal Care and ControlâÄôs requests were presented to a City Council committee last Wednesday and were held off for further consideration. The Minneapolis City Council recently granted Minneapolis Animal Care and Control the right to issue animal cruelty citations for up to $500 in less severe cases. More severe cases are charged as criminal offenses and go through the court system. In 2006, Minneapolis Animal Care and Control was given the authority to issue administrative citations, which are more immediate because they carry a fine, instead of going through the court system, Niziolek said. Previously, Minneapolis Animal Care and ControlâÄôs charges went to court, where they werenâÄôt taken seriously alongside severe crimes, such as robberies. âÄúThis has real, immediate consequences for the owner,âÄù Niziolek said. Following the death of a young boy after a pit bull attack and another near-fatal dog attack on a woman who suffered serious trachea damage, a work group made up of City Council members, Minneapolis Animal Care and Control staff and animal owners was established in 2007 to address the cityâÄôs process of dealing with dangerous animals. Those incidents highlighted the urgent need to deal with violent dogs, Niziolek said. Recalling âÄúRalph,âÄù another cat that attacked unsuspecting dogs and people as they passed the yard, Niziolek stressed the need for owners to control their pets. âÄúOur goal is to have responsible pet owners being responsible for the behavior of their pets,âÄù he said. âÄúEverybody should have the right to walk down the public sidewalk and not be afraid of getting attacked.âÄù