Minnesota scored a season-high 197.500 against Pittsburgh. 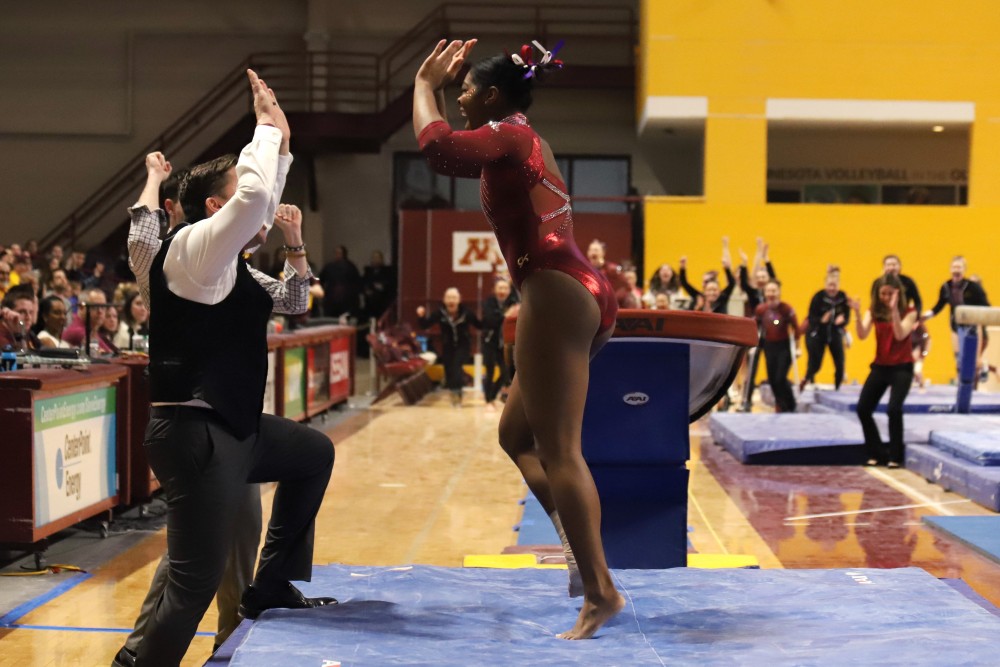 Paige Williams is congratulated by her coach after vaulting on Saturday, March 2 at Maturi Pavilion.

The Gophers women’s gymnastics team had been trying to put all four events together the entire season, and on Saturday afternoon, the team finally did it.

“We are really getting better each and every week,” said head coach Jenny Hansen. “It was fun. We put all four events together tonight and we haven’t done that this year and I think that’s why we saw such a jump in the score for us. They were just on, and I know they wanted to send their seniors out in style and they sure did.

The No. 11 Gophers swept the event titles as Paige Williams won the vault and floor exercise with scores of 9.900 and 9.925. Her vault score was her career-high on the event.

“She performed with such confidence, it was so fun to watch her,” Hansen said. “She’s got such big gymnastics, the amplitude she has makes everyone’s jaws drop.”

Lexy Ramler took home the other two event titles, scoring a career best on beam with a 9.750 and tied her career best with a 9.950 on bars. Ramler put together the top all-around performance of the night scoring 39.650. The score is the third best all-around score in Gophers history. Ramler owns the top score among all Gophers at 39.725.

Saturday also saw a breakout performance from freshman Tiarre Sales. Sales competed on three events: bars, beam and vault. She scored her career-high in all three. Her 9.900 on bars earned her third place overall, her 9.850 performance on vault placed her in a tied for third spot, and her 9.900 on beam won her second place.

“That’s what she does in practice, so it was so fun to see her exactly what she does,” Hansen said, adding the whole team felt amped up to send the seniors out strong.

An announced crowd of 2,698 cheered the team on, standing up and chanting after every routine for Minnesota, which left an effect on the gymnasts.

Minnesota honored their two seniors following the event, Rachel Cutler and Selena Ung. Cutler didn’t compete due to injury and Ung competed in the floor exercise in her last regular season home meet. This group of seniors was the first recruiting class for head coach Jenny Hansen, now in her fifth year.

“We’ve been through the whole process together,” Hansen said. “For them to finish out and be a part of such a great team is pretty special.”

Minnesota travel down south to the Elevate the Stage event in Birmingham, Alabama to take on No. 7 Georgia, No. 20 Arkansas and No. 37 Michigan State.