Film students look for a home 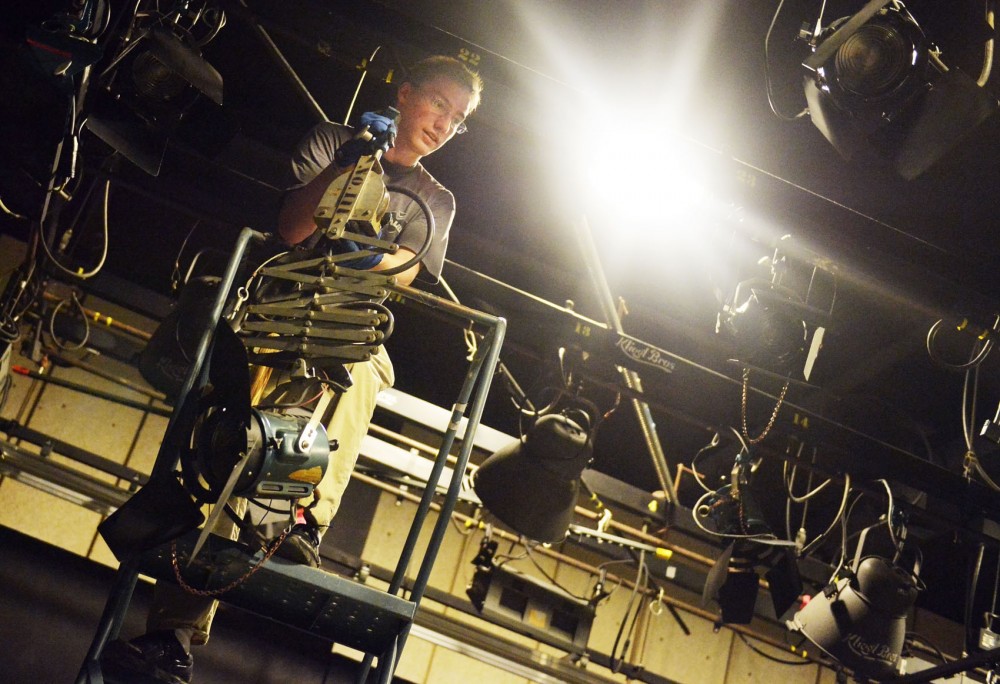 Communications junior Marty Davis fixes the lighting in preparation for a film class on Thursday, Sept. 5, 2013, at Rarig Center.

Elizabeth Habib decided that she wanted to be a TV producer during her freshman year at the University of Minnesota.

“Communications seemed like more of a — I don’t want to say more of a real major — but more, you know, practical,” she said.

Habib didn’t learn about stud­ies in cinema and media culture, a major offered by the CSCL depart­ment, until late in her college ca­reer.

SCMC is comprised of courses from 14 to 18 different depart­ments, depending on the semester. Of the SCMC major or minor class­es, only five offer hands-on produc­tion experience.

“I feel I can’t get a very advanced education in film,” she said.

Habib is one of many students and faculty members that said the University’s current offerings for film production are scattered and insufficient, despite repeated at­tempts to strengthen them.

A history of trials

The University hired influential photographer Jerome Liebling  in 1949 to build a film program for a surge of students after World War II.

Since then, efforts to strengthen film offerings at the University have had a long and frustrating history, film studies coordinator Verena Mund said.

Mund is the sole SCMC administrator. She works part time.

“Again and again, there have been phases where there was energy put behind film studies here,” she said.

“There was kind of the attitude that that’s not where academic priorities come from. It comes from the top, from the deans,” she said.

A few years ago, faculty members proposed adding a DVD collection, editing station and screening room for SCMC students and instructors, but the idea was also rejected.

Past proposals for a new department and additional resources have been too costly or required too much space, CLA associate dean for planning Gary Oehlert said.

“You don’t need a new department to offer a new degree program,” he said. “We were able to offer [the SCMC program] by combining the resources we already had.”

The state of cinema studies

Out of the 173 students pursuing degrees from the CSCL department, 100 are majoring in SCMC.

SCMC offers four of its own courses. Students complete the degree program by taking a number of applicable courses offered by other departments. Students and faculty said this structure has mixed results.

SCMC’s interdepartmental nature gives students the opportunity to study film with experts from a variety of departments, Mund said. However, the scattered structure presents communication problems.

Mund said she has to wait for the other departments to list their course offerings for the semester before she can even compile the SCMC course listing.

Taking film studies courses from many departments can also lead to redundancy in coursework, Habib said.

“The other departments will teach you the same stuff from different perspectives,” she said.

Mund said the addition of a screening room and other facilities would improve communication between professors teaching film across departments, but CLA has rejected past proposals.

“The people doing film and media studies, mainly the faculty and grad students . . . they don’t meet each other,” she said.

Students and faculty at an impasse

Cervin said students complain to her daily about the lack of film department and production courses at the University.

“I think they feel they’re learning how to ingest and decode and read media, but they’re not getting the kind of learning they need to create it,” she said.

In the meantime, students are looking elsewhere for production experience as faculty try to bolster SCMC.

“It seems a little bit thrown together,” he said of the current degree program.

Larsen hosts weekly film screenings through CSCL Student Association to encourage community among film students.  He’s currently trying to join forces with other student film groups like the Rainer Werner Fassbinder Film Society. However, the groups are oriented towards watching films rather than producing them.

While Oehlert said the SCMC coursework is strong, he acknowledged that film production classes are limited.

“If you’re trying to learn to be a cinematographer or a director … and if we don’t teach that, then obviously there’s not a good match there,” he said.

Still, Mund said she hangs on to her aspirations for the University’s film program. She said she wants SCMC to be better equipped, to have more space, to offer a graduate major and to hire new staff — but she keeps her expectations low.

“I’d like to see that, but there’s also the reality,” she said.

“You have to see the context.”