The brand just opened its new studio space on the border of Como and Northeast. 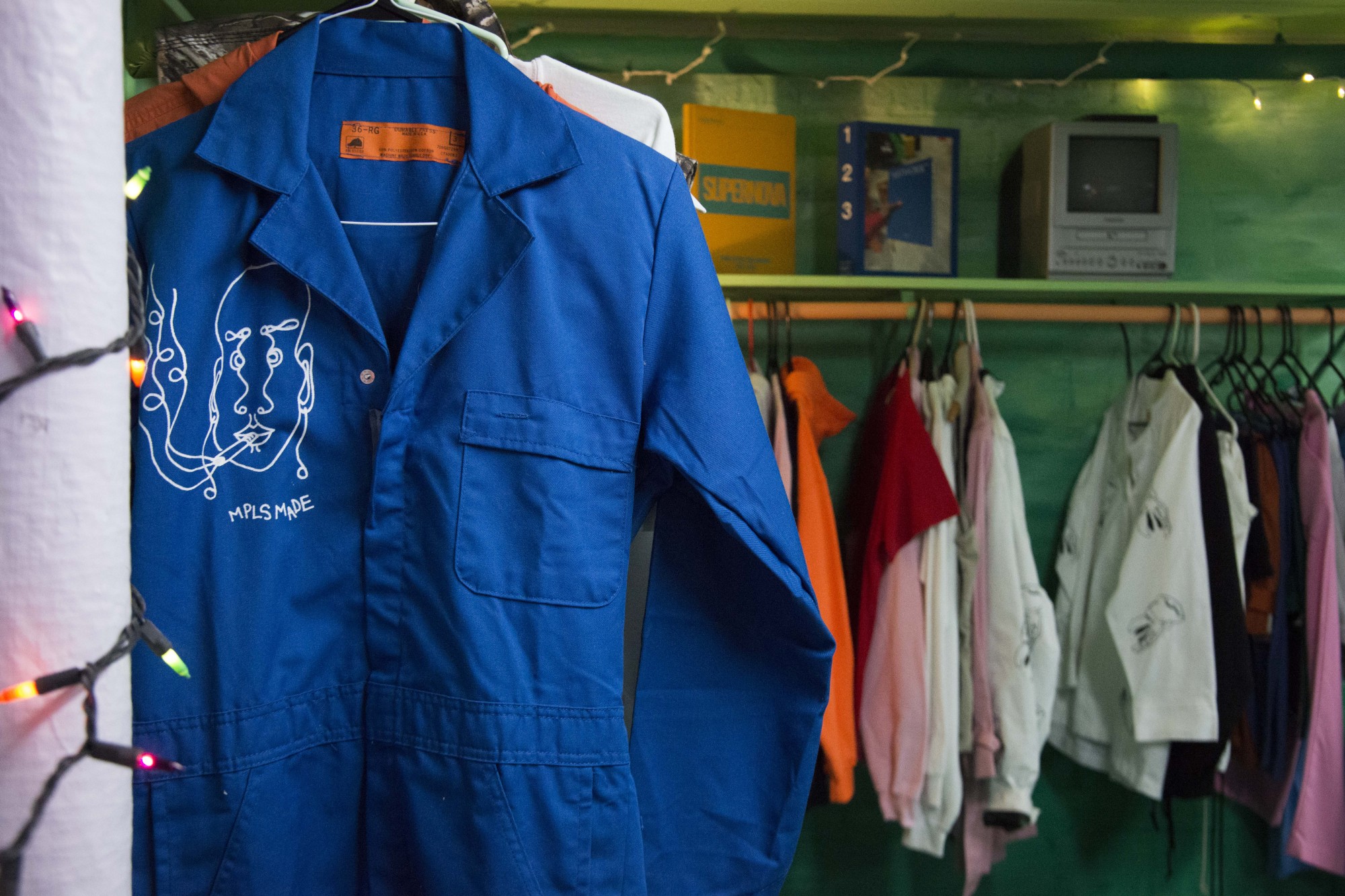 A MPLS MADE jumpsuit hangs on display in Elena Bagne’s studio space in Northeast Minneapolis on Wednesday, Nov. 20. MPLS MADE is a custom hand-drawn and printed streetwear brand that uses thrifted clothing in an effort to be a sustainable.

Elena Bagne pats her screen printing press that sits in the middle of her new studio space. The room has bright green walls and rap music playing through speakers.

“This was terrible trying to get it up here,” Bagne said.

Her studio at 2010 E. Hennepin Ave. is part of the old General Mills research labs, which have since turned into an artist hub. In true Minneapolis fashion, the property is actually several buildings connected by skyways and tunnels. Bagne’s studio is in a building with a bright red sign that says “ART.”

Bagne created Minneapolis Made Apparel two years ago after realizing a love for screen printing in high school. Her childhood friend Jenny Zander was taking an art class and had the option to create a T-shirt design. When Bagne heard about it, she was intrigued.

She began learning to screen print at a facility in St. Paul but eventually moved to her own space in her friend’s mom’s basement.

“It was really tough because there was no room, and screen printing takes a lot of space,” Bagne said. “I had boxes of clothes, and it was mayhem. Then I just kind of pulled the trigger on it and threw all my money into this.”

At only 21-years-old, Bagne moved out of her first apartment to support Minneapolis Made Apparel at a larger capacity. The clothes are made to order and feature anatomical designs in a linework style. Each piece is simple and bright, but also striking.

“It’s hard to say the exact moment I get inspired,” Bagne said. “If I think about something that might look cool, I draw it up and see how it looks, but I’ve always been into anatomical things, like anything with the body. I think it’s cool because clothing is obviously for the body.”

Her creations range from a pair of deep purple pants with teeth printed all over them to a black, oversized jacket that reads “Death can be beautiful” with a skull and floral detailing. Bagne hopes to eventually rely on thrifting to create one-of-a-kind pieces that are already lived in and to reduce her environmental impact.

Following the success of Minneapolis Made Apparel’s first year, Bagne’s friends have noticed a shift in her work.

The last two years have followed the natural trajectory of Bagne’s work, but it’s been a dream come true at the same time.

“I think I always waited for there to be a big moment,” Bagne said. “I’ve kind of learned with a lot of things in life that there’s not many moments that are like big standout moments. It’s just the accumulation of a lot of little things.”

These little things include seeing someone that she didn’t know at Target wearing her hoodie or noticing singer Jessie Reyez wearing Minneapolis Made Apparel’s “Support Female Artists” line.

“She’s getting a bigger following, and people are showing interest,” said Katie Jones, another close friend of Bagne’s. “It pushes her to keep going and gives her motivation to keep working. She gets stuck sometimes, but I think the support that she gets keeps her going.”

Bagne has bigger goals in mind for the future of Minneapolis Made Apparel, but she’s proud of how far she’s come.

“I feel like every year I’m somewhere completely different than I was the year before,” Bagne said. “I’m not rich or anything off of this, and that’s not really why I’m here. It’s just been a whirlwind.”