The Gophers haven't produced an NBA draft pick since Kris Humphries in 2004. 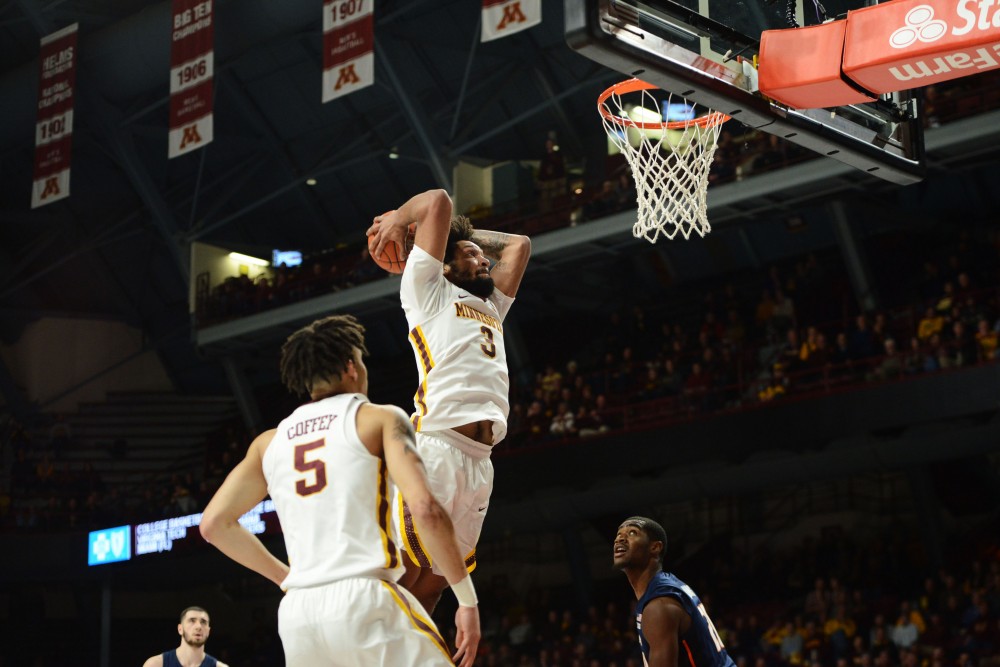 Senior Jordan Murphy winds up for the tomahawk dunk at Williams Arena on Wednesday, Jan. 30.

Jordan Murphy and Amir Coffey were hoping to be the first Gophers selected in the NBA draft since 2004, but Thursday night came and went without either player hearing their name called.

However, their dreams to play in the NBA are still alive. Shortly after the draft ended, Murphy committed to playing in the Summer League for the Minnesota Timberwolves. The agreement was first reported by Sam Vecenie of The Athletic.

The 6-foot-7 power forward will have to make an impression with the hometown Timberwolves in order to earn a contract in the G League, the NBA’s developmental league, or maybe even in the NBA itself.

Murphy’s Gophers career almost never happened; he committed to Virginia Commonwealth University in high school, but was released from his national letter of intent after their head coach Shaka Smart took a vacant job with the Texas Longhorns. Yet, Murphy finished with a historic career with Minnesota.

After his senior season, the Gophers star was named to the All-Big Ten first team by the media. Murphy helped the Gophers reach the NCAA Tournament for second time in three years, finishing the season averaging 14.4 points and 11 rebounds per game. The San Antonio, Texas native ranks second all-time in the Big Ten for rebounding and is the Gophers’ second all-time leading scorer.

Coffey announced on Twitter on Saturday that he will start his NBA career with the Los Angeles Clippers. Coffey signed an Exhibit 10 contract which can be converted to a two-way contract at the beginning of the season.

Coffey was on the fence about committing to the NBA draft or staying with the Gophers, waiting until the last possible day to decide. Ultimately, the 6-foot-8 small forward chose to forego his senior year to pursue an NBA career.

Coffey was an integral part of the Gophers program during the 2018-19 season. The team’s leading scorer averaged 16.6 points per game and was named to the All-Big Ten third team.

The Hopkins, Minnesota native will likely start in the G League before he earns his way onto an NBA roster. Coffey was a two-time Big Ten Player of the Week last season, and played several different positions, including point guard. He filled the role after teammate Marcus Carr had his transfer waiver denied by the NCAA and Isaiah Washington struggled in his sophomore season. Washington has since transferred to Iona.