Gov. Mark Dayton unveiled his budget proposal on Tuesday, and it only offers one-quarter of what the school requested. 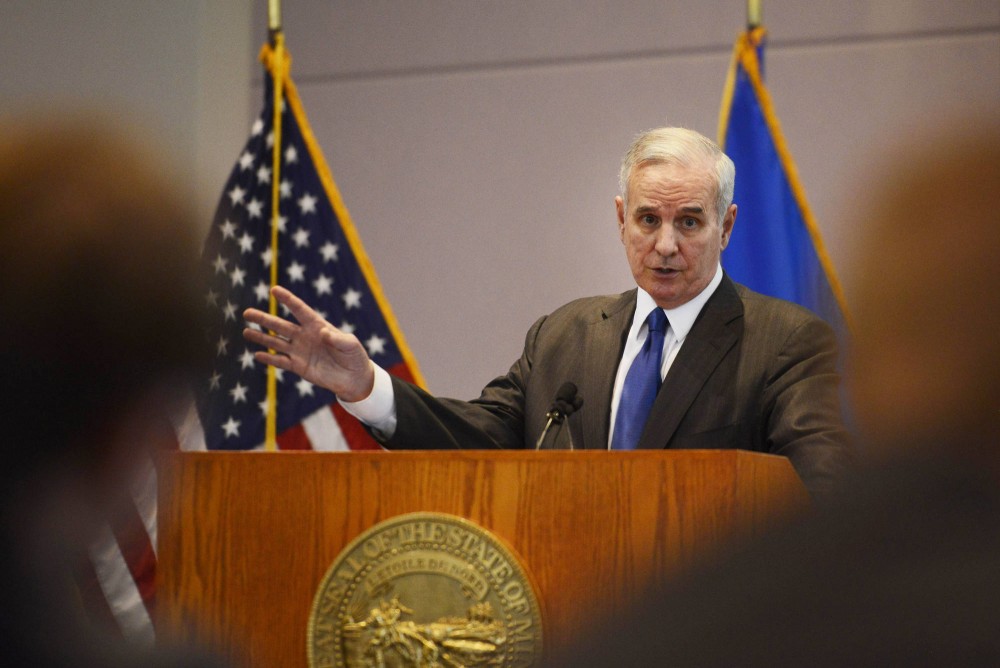 Gov. Mark Dayton fields questions on his $42 billion budget proposal at the Minnesota Department of Revenue on Tuesday. His proposed budget allocates only about half of the University of Minnesota's request to continue a tuition freeze for undergraduate students who pay in-state tuition and resident graduate students.

University of Minnesota officials may have their work cut out for them at the Capitol this legislative session.

The school is requesting $127.2 million in state funding over the next biennium, which includes the cost of a tuition freeze for resident students. But Gov. Mark Dayton’s budget proposal, which was announced on Tuesday, only includes about one-fourth of the school’s request.

The governor’s proposal includes half of the necessary funding to hold down University resident tuition for the next biennium and omits several planned initiatives the school is asking to fund with state dollars. It does, however, include a $30 million boost for the University’s Medical School.

“I’ll be at the Legislature in the weeks ahead to support the governor’s proposal and try to build on it,” President Eric Kaler said in a University release.

The governor’s proposal is the first step in the legislative process of crafting the state’s budget. Members of the House and Senate will consider it as they draft their own ideas of the state’s spending throughout the session.

Dayton’s plan would allocate $32.6 million to continue a tuition freeze for undergraduate students at the University — about half of the institution’s $65.2 million request for keeping resident-tuition levels flat.

And if the governor’s numbers become final, the University would have to devise additional ways to pay for the remaining balance for a tuition freeze, Dayton said at a press conference on Tuesday.

Some legislators have mixed feelings about freezing tuition at the University, saying the school should lower tuition rates without the use of state funds.

“I would be not as likely to earmark anything for tuition relief, because I make no secret of the fact that I believe taxpayers’ money should be going toward more mission-directed things than a tuition freeze,” said Sen. Terri Bonoff, DFL-Minnetonka, chair of the Senate’s higher education committee.

“We were certainly disappointed that [Dayton] couldn’t reach far enough to fund some of those other initiatives,” said the University’s Chief Financial Officer Richard Pfutzenreuter.

Dayton proposed the Medical School receive extra funding in his budget, which would go toward hiring 50 new researchers over the next eight years, pending Board of Regents approval.

The governor listed education, transportation, seniors and people with disabilities as top priorities in his budget proposal overall.

He recommended allocating 75 percent of the state’s $1 billion surplus to education, health and human services, and tax incentives for children and dependent adults.

Compared to Dayton’s past budget proposals, early education is a high priority. His latest proposal includes free preschool for all 4-year-olds and raising overall funding levels for K-12 schools.

“Over half of this surplus goes into our future,” Dayton said at the press conference. “Into the young people who would comprise the future of Minnesota.”