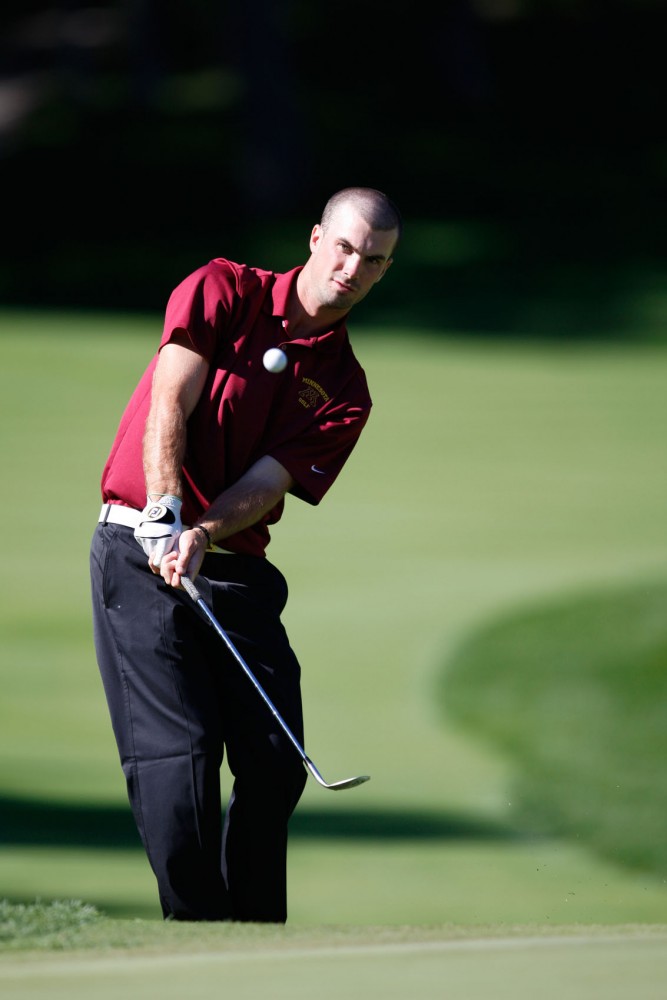 Donald Constable, who played for the Gophers from 2010-11, qualified for the PGA Tour in early December.

It took him more than three months and a lifetime of practice. He was living out his dream and carrying on the legacy of his father, who passed away when he was a junior in high school. He was finally a member of the highest level of golf in the world.

And he was exhausted.

After 17 rounds of tournament golf over three months, Donald Constable had qualified for the PGA Tour.

Constable, who golfed with the Gophers from 2010-11, was one of the last few to make the tour in his group. He obtained his tour card through the PGA’s three-month qualifying process known as Q-school.

But it didn’t matter how he made it. He was now on the same stage as Tiger Woods and the world’s other pre-eminent golfers.

“It’s weird being around all of these guys that you’ve watched on TV for so many years,” Constable said, “and now you’re sitting at breakfast with them and hitting balls with them before you tee off.”

Constable, 23, became, in December, the fourth former Gophers athlete to qualify for the PGA Tour.

He played for the Gophers for a season and a half after transferring from the University of Texas. He finished his career with the fourth-lowest scoring average in Gophers history.

While Constable hasn’t made the cut in either of his two tour events thus far, those who know him well think he has the ability and temperament to make it on the tour.

“He needs to keep believing in his ability because he has a high level of golf within him,” said John Carlson, the Gophers’ head men’s golf coach. “He’s going to do well out there. He’s a confident player. We can’t wait to watch him develop on the PGA Tour.”

Qualifying for the tour

Constable advanced through the tournaments with 11th-, second- and 19th-place finishes.

He was getting closer to his goal, but he managed to stay calm all the way through.

“Even now, talking to him as he went through Q-school, he really felt like he had nothing to lose and everything to gain,” said John Coatta, Constable’s coach at Minnetonka High School. “And if he didn’t make it, he was going to end up on the Web.com Tour [the PGA’s developmental tour].”

The final qualifying stage took place Nov. 28 to Dec. 3 in LaQuinta, Calif., and Constable was ready.

He shot a 5-under-par 67 in his first round and played all six rounds under par. He finished the tournament tied for 22nd at 17-under par — just good enough to qualify for the PGA Tour.

“All of us girls called him, and we were excited, freaking out,” said Kate Constable, one of Donald’s three sisters. “He was calm. I think it hadn’t really hit him yet, and I think he was just emotionally exhausted, almost more than physically, just after that full week.”

Constable said he was thrilled to make the tour.

“But I was kind of winding down from my extreme high,” he said. “I was just kind of exhausted and tired from it all.”

Work left to do

Constable played in his first PGA Tour event, the Sony Open at Waialae Country Club in Hawaii, starting Jan. 10, but he didn’t make the cut.

After a first-round 75 on Thursday, Constable was able to relax Friday, Kate Constable said.

“He looks like he’s having fun,” she said after Donald had completed his first nine holes Friday. “He’s relaxing a little bit more.”

Constable shot a 3-under-par 33 on the back nine of his second round and a 2-under-par 70 for the round. He missed the cut by two strokes.

Woods shot 14-under par to win the event.

Although Constable has his PGA Tour card, he can’t play in every single PGA event.

He’s automatically qualified for a few PGA Tour events, but he’ll have to qualify for most other events. He can do so by improving his results or through Monday qualifying rounds.

Constable can also play in any Web.com event he wants.

If he finishes No. 126 to 200 on the PGA Tour money list, he’ll have to re-qualify for the tour through three end-of-season tournaments.

Growing up with three sisters made Constable a more compassionate person and thus helped his game, Kate Constable said.

“He’s really protective over all of us, and he’s constantly checking in with us,” she said. “He’s more caring, and I think that can kind of translate into his game a little bit — just kind of being more calm and not getting so uptight about things.”

“I think he realized then that he had a gift,” Coatta said. “And that’s where he probably was really looking serious at playing competitive golf.”

But in March 2005, during Constable’s sophomore year of high school, his dad was diagnosed with lung cancer.

“When he [his dad] passed, I think he just kind of wanted it that much more for my dad and because that was something my dad wanted for him,” Kate Constable said. “It just kind of put another little fire under him.”

Constable played for Texas for a little more than two seasons after high school and transferred to Minnesota in January 2010.

While at Minnesota, Constable was named second-team All-Big Ten in 2011 and had a top-50 NCAA ranking.

He spent the 2011-12 season playing in amateur events while finishing his degree.

After graduating from the University last May, Constable played a national amateur schedule this summer.

Carlson said Constable practiced with the Gophers while preparing for Q-school.

“I could see that he had a different motivation,” Carlson said, “just a different level of focus that he was putting in, mainly to his short game.”

Constable has been a mainstay at Minnetonka High School, too. He spoke last season at the golf team’s banquet, and Coatta said current golfers look up to him as a role model.

While he enjoys spending time in Minnesota, Constable hopes to become a mainstay on the PGA Tour.

“I would rather just keep my card,” he said, “and not have to go back.”