The forward scored a personal-best 25 points in the winning effort. 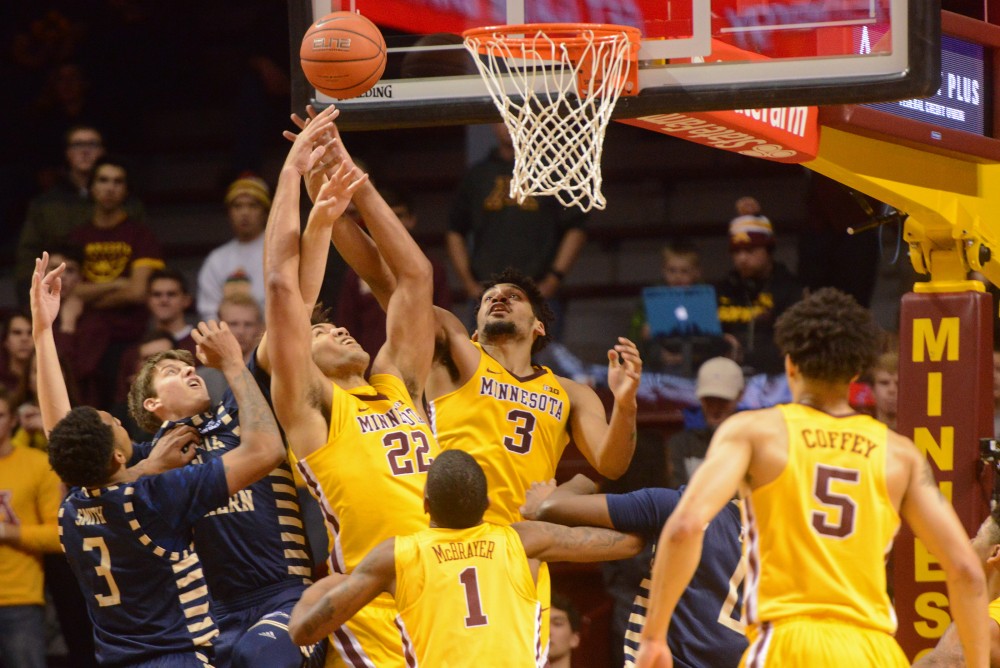 The Gophers coughed up their 11-point halftime lead and saw themselves in a tie game to the Hawkeyes with under a minute left, and yet another blown lead looked imminent for Minnesota.

Murphy scored a career-high 25 points as Minnesota defeated Iowa 101-89 in a double-overtime thriller at Williams Arena.

“The most proud I’ve been of our guys,” said head coach Richard Pitino. “I was refusing to sub. They were tired, they squandered a lead and they fought through it… Murphy made winning plays at the end.

Minnesota called upon its freshman guard in the second period of overtime.

Amir Coffey had four points and a steal in the final period of the game. He finished with 13 points and six assists in 45 minutes of play.

The Gophers pulled away in the second overtime and outscored the Hawkeyes 17-5.

Guard Nate Mason shined for Minnesota in the first overtime. Mason scored five of Minnesota’s seven points during that stint.

Murphy fouled out of the game with 1:34 left in the second overtime. The Gophers went on a 7-0 run to close out the game in their leading scorer’s absence.

“I was just able to get it going on rebounding again,” Murphy said. “I was just really confident down the stretch.”

Iowa came back from a 11-point halftime deficit with a 12-0 run in the second half. Iowa forced four turnovers from Minnesota during that stretch after switching to trap defense.

“The biggest thing is, go attack it, you’re showing them that you don’t want to attack it,” Pitino said. “We had a really bad couple minutes there.”

Coffey slammed the ball and jumped off the rim as Williams Arena erupted. The dunk helped the Gophers take a 71-70 lead with 2:39 to go in the game.

Jok finished with a game-high 28 points on 8-20 shooting. The Hawkeyes forward went 9-9 from the free-throw line in the game. He had just two points in the first half.

Mason drove to rim with ten seconds left in regulation. The guard completed the layup to tie the game with eight seconds left. The Gophers stopped the Hawkeyes on their ensuing possession to force overtime.

“[Pitino] trusts me enough,” Mason said. “I saw [forward Cordell Pemsl] switch on me, and I knew he couldn’t stay in front of me, so I drove right and just kept going.”

Minnesota got off to a fast start with two consecutive 3-pointers. Mason and guard Akeem Springs hit the shots from behind the arc to put the Gophers up 11-4.

Center Reggie Lynch had just three points in the game, but he made his impact in other ways. Lynch had six blocks and 12 rebounds.

Minnesota held Iowa to 38.7 percent from the field in the first half. The Hawkeyes’ shooting improved to 44.1 percent in the second half.

Springs was the game’s leading 3-point shooter with five made shots from behind the arc. He finished with 17 points.

Mason finished with 25 points to tie with Murphy and had seven assists on 9-21 shooting.

Minnesota plays Rutgers next on Feb. 11 in Piscataway, New Jersey.