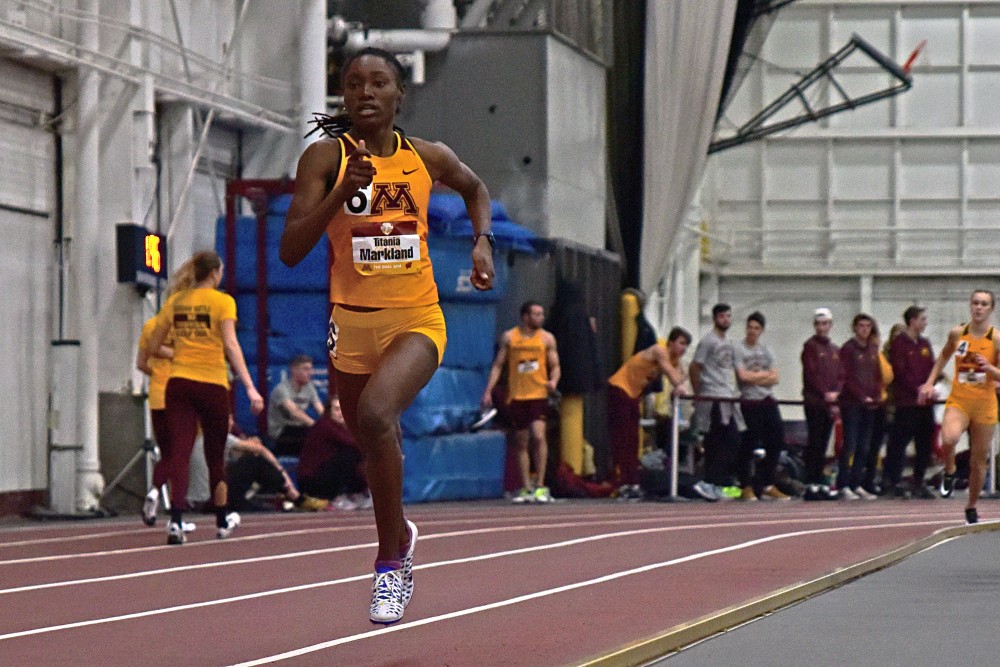 Redshirt senior Titania Markland competes during the Border Battle at the Field House on Saturday.

Emma Spagnola and Agnes Esser had historic performances for Minnesota over the weekend.

On Friday, Spagnola won the 400-meter hurdles at a time that broke a 13-year old record. Esser had a career-best in the hammer throw, which earned her first all time in the program’s history.

The Gophers competed on Thursday, Friday and Saturday in at the Mt. Sac Relays, Bryan Clay Invitational and the Beach Invitational in California.

On Saturday in Long Beach, California, the trio of hammer throwers led the field again. Ogunrinde won the event with a throw of 220 feet, 2 inches. Clunis finished fourth at 210 feet, 10 inches which moves her into second in Minnesota history. Esser threw 208 feet, 9 inches for third in program history.

Esser also broke a Minnesota record in the discus throw at 190 feet and 3 inches to finish in fourth. Kiley Sabin had a personal record of 175 feet, 9 inches to come in at 11th.

Spagnola finished her historic race with a time of 57.35 seconds.

“That’s been one of my goals since I got here was to break the school record in the 400 hurdles,” Spagnola said. “I was super excited when I was able to do that.”

Rachel Schow finished second at 58.08 seconds to become fourth in Minnesota history. They also competed in the 100 meter hurdle, Spagnola finished fifth at 13.52 seconds and Schow came in at eighth at 13.90.

“[Spagnola and I] do all the same events, I think I spend way too much time with her in the best possible way,” Schow said. “During that race, her and I were running back and forth and we just have so much fun competing together and that’s what makes this year a lot more fun.”

On Thursday, Minnesota had four players competing in the Bryan Clay heptathlon in Azusa, California. Ayesha Champagnie led the group with a career-best 5,521 points, including personal records in the 100-meter hurdles, 200-meters and 800-meters to finish fourth in Group 4. She is now third in program history.

Ashley Ramacher finished 10th in Group 3 and cracked in the top five of Gophers’ history. She had a career-best of 5,231 points made personal records in the 100-meter hurdles, 800 meters, high jump, shot put, long jump.

Sofie Albrechtsen finished 13th in Group 3 to finish eighth in Minnesota history and posted a career-best of 5,143 points.

“A lot of people did well all across the board, a lot of that had to with having good weather” head coach Matt Bingle said. “We’ve basically had one meet where we’ve had great weather.”