Gophers rout Wisconsin in a sweep 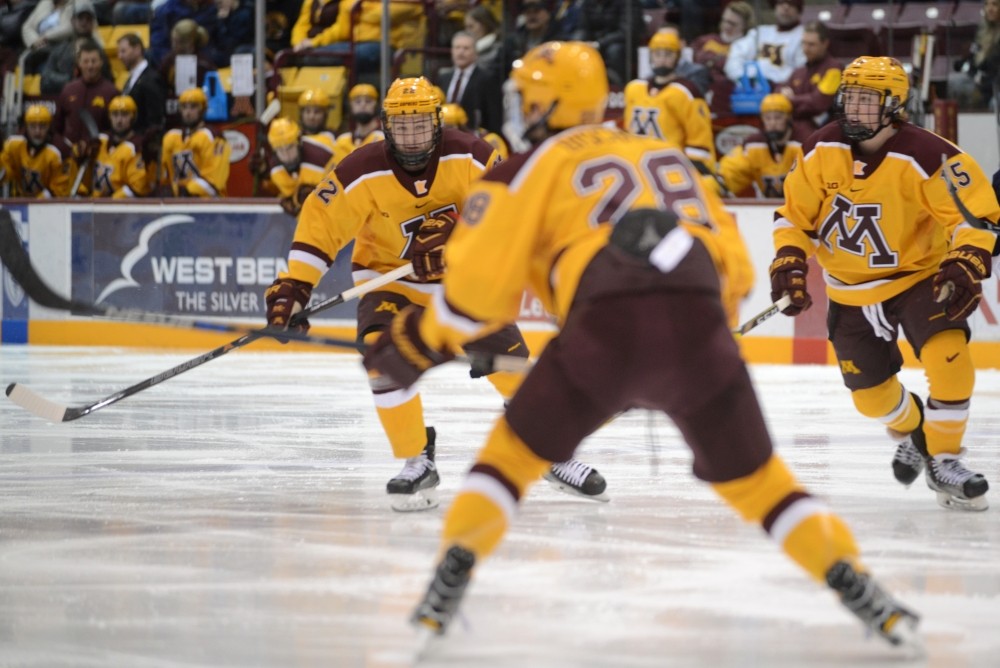 Paul Bunyan’s Axe might have gone back to the Badgers after they shutout the Gophers in football, but the men’s hockey team managed to score seven against Wisconsin on the ice.

“We talked about the playoffs had begun for us,” head coach Don Lucia told the Gopher Radio Network. “We’ll have a chance at home-ice and this was a critical two-game segment for us.”

The offense for Minnesota has struggled to produce much of the season, but Saturday, it came alive to score seven goals on the Badgers, a season-high goal total for the team.

Forward Rem Pitlick — goalless in the past 12 games — scored two goals, including one where he batted a puck out of mid-air. On top of Pitlick’s offensive resurgence, another name that has been quiet on the scoresheet this season came back and scored a goal for the first time in months.

Forward Leon Bristedt scored 20 goals two seasons ago for the Gophers, but had only three coming into Saturday’s game. He scored his fourth goal of the season in the victory, which marked the first time he scored an empty-net goal since a game in late December against Army. The last goal he scored that wasn’t an empty-netter was on Nov. 4 against Michigan State.

It didn’t take long for the Gophers to get back into their offensive stride. Just 1:07 into the game, Bristedt’s goal opened the scoring. Minnesota wasn’t done there, though. The Gophers scored two more in the first period alone, including the eventual game-winner from Brent Gates Jr.

Another forward who is enjoying a resurgence on the scoreboard is captain Tyler Sheehy. He added a goal Saturday, and he ended the weekend series with three goals in two games.

Besides the scoring prowess returning to Minnesota’s lineup, the defense kept the gates closed for Wisconsin’s offense. The Gophers scored 11 goals in the two games, while the Badgers scored just three.

“Our team did a real good job of keeping them to the perimeter, making my job easier,” goaltender Mat Robson told reporters. “I feel like they made me look really good all weekend.”

The game was riddled with penalties — seven power plays for each team. Minnesota has had difficulty converting on the power play this season, with only 17 goals with the extra man coming into the game, but this matchup was different.

Ramsey scored on the power play, a unit he is not usually on. Lucia credited that to his effort on the penalty kill that stopped all seven of Wisconsin’s power play chances.

“We had some good looks tonight,” Lucia told the Gopher Radio Network. “It was nice to see [Jack] Ramsey get rewarded for all the dirty work that those guys do during the game with the penalty kill.”

Minnesota earned another three points Saturday, which brought them to 29. The team also went ahead of Wisconsin for home-ice advantage.

Notre Dame, Ohio State and Michigan are all ahead of the Gophers in the conference standings. The Wolverines have 32 points, close enough for Minnesota to get even in points with one victory.