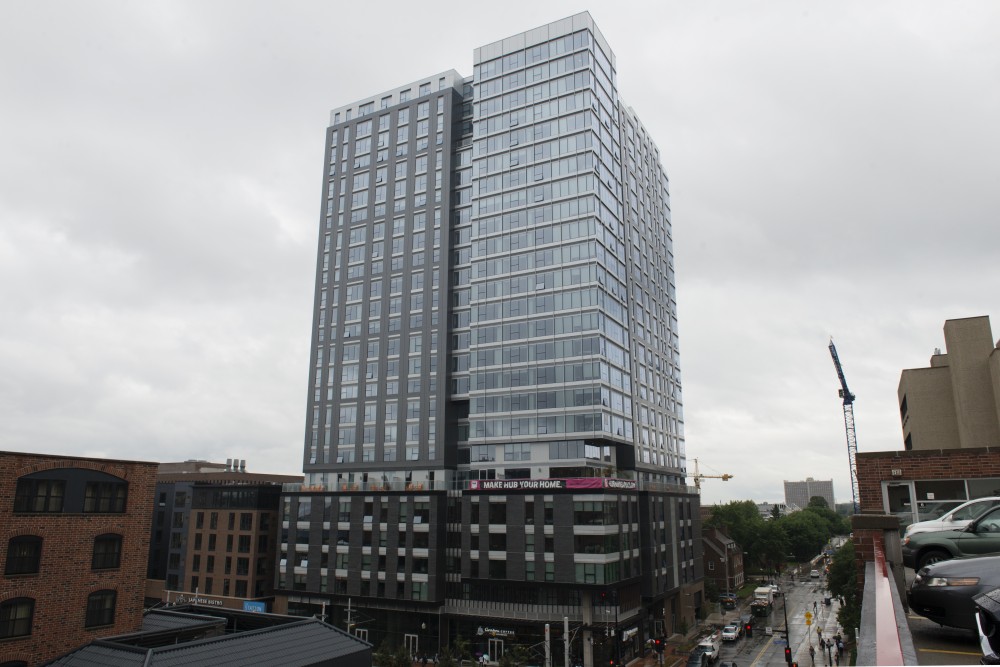 The Hub Minneapolis, which opened for tenants this summer, is seen near East Bank on Tuesday, Sept. 4. The building is 284 ft. tall.

Amidst a rapidly-changing commercial landscape, The Hub Apartments will bring with it a chunk of retail space to Stadium Village.

The newly opened luxury student housing complex has two spaces available for businesses to rent beneath the apartments. So far, Caribou Coffee and Roti Modern Mediterranean have signed leases.

Caribou first opened Aug. 24, and the location features a “walk-up” window where customers can place orders outside.

Sarah Lefor, a University of Minnesota freshman, was among many waiting in line for coffee. Despite the presence of Starbucks just across the street, Lefor said she prefers the Caribou and its proximity to her dorm.

“I think coffee is always a great way to get millennials to go somewhere,” Lefor said.

The space that Roti Modern Mediterranean will occupy is under construction and is projected to open in December.

Their menu features customizable dishes, allowing customers to choose what goes in their pita or rice plate. Vegetarian, vegan and gluten-free options will also be available. Roti has 34 other locations throughout the country, including around other college campuses.

“We take a modern stance not only [on] recipe and recipe curation but also how people get fresh food on their terms,” said Dane Mathews, vice president of marketing.

Mathews said the modern interior of the luxury apartment will complement the restaurant’s atmosphere.

“The building and the new construction allows us to do some unique things inside and make the environment really inviting to students,” said Mathews.

The corner where the tower now stands has seen turnover in recent years. A block of independently-owned businesses, including notable names such as The Big 10 Restaurant and Bar and Espresso Expose, were displaced by the development in fall 2016.

The Hub isn’t alone in its endeavors to join retail space with upscale student living in Stadium Village. WaHu Apartments also offers leases below its massive complex, but some storefronts still stand empty.

Craig Wack, spokesman for the Hub Apartments, said businesses and the housing complexes have a mutually beneficial relationship.

“We’ve seen that retail elements in our student housing communities enhance one another. Having a restaurant, coffee shop, convenience store, etc. in one of our communities is a great selling point for prospective residents,” Wack said in an emailed statement.  “We tend to build communities that are within walking distance to campus, so shop owners also like our locations and the potential for foot traffic from all parts of the university community.”

Vince Netz, president of Prospect Park Association, said The Hub will have an easier time filling the retail space than WaHu because of its proximity to the light rail station and hospital. He said the new businesses are a welcome addition to the area.

“It adds nice activity in the evening in [an area] which used to be a dead zone,” said Netz.