Blatt taking notes, preparing to step in for Gophers 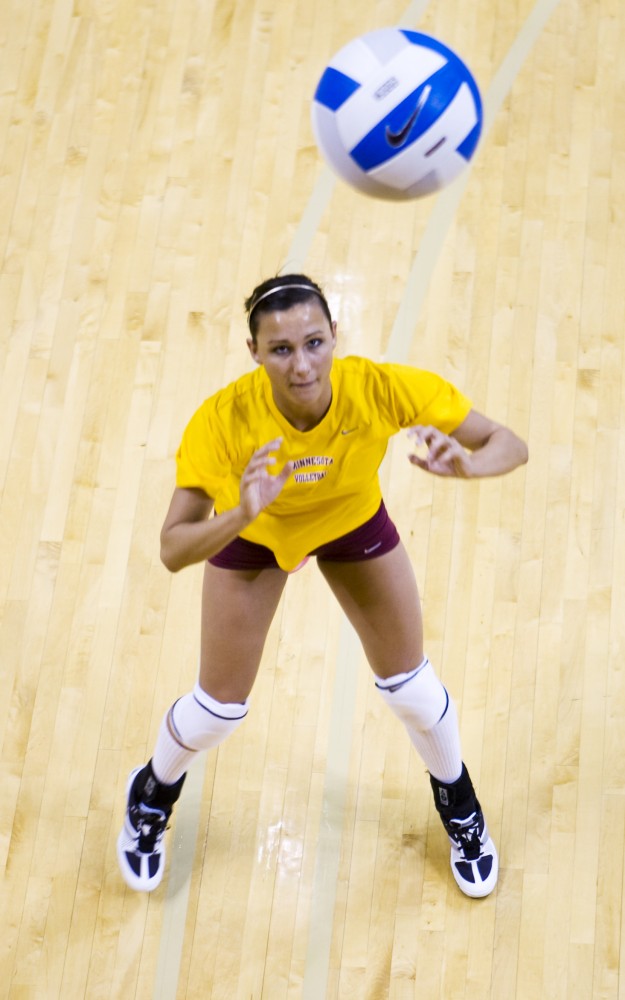 Freshman Alex Blatt is in line to take over what head coach Mike Hebert said is the most difficult position on the team, as senior setter Rachel Hartmann is in her last season.

Minnesota volleyball senior setter Rachel Hartmann has played a major role on the Gophers team from the moment she stepped on the court as a freshman. Hartmann was a part of MinnesotaâÄôs two-setter system in 2005, and has been the clear choice at her position ever since, even taking on the role of captain during her junior season. But HartmannâÄôs time remaining with the Gophers is running out, as the senior is on her last season of eligibility. Enter Alex Blatt. Blatt, the 5âÄô11âÄù freshman setter from Orland Park, Ill., is putting in plenty of practice time under the supervision of the Minnesota coaching staff and Hartmann this season, and appears to be next in line to lead the GophersâÄô offense in the coming years. âÄúShe has clearly gotten a lot better since sheâÄôs arrived here,âÄù coach Mike Hebert said. âÄúSheâÄôs getting closer and closer to being able to run the team. The setter position is the most difficult position on the team, and itâÄôs awfully difficult to come in as a freshman and master that craft.âÄù During the preseason workouts, Blatt was even in the running for the starting position. But with the strides Hartmann had made during the offseason, Blatt instead took on more of a developmental role. âÄúSheâÄôs playing better defense, sheâÄôs anticipating things better, and sheâÄôs much more consistent with the location of her sets,âÄù Hebert said of HartmannâÄôs play this year. HartmannâÄôs strong play has helped lead to a more reliable offense this season, but Blatt said it has also been a help to her. âÄúI watch her release, I watch her footwork, I watch her hands,âÄù Blatt said. âÄúSheâÄôs a really stable player, and thatâÄôs what I need to become.âÄù HartmannâÄôs role in BlattâÄôs training extends beyond that, however, as Hartmann has taken time to help Blatt through some of the same issues Hartmann had early on. âÄúWhen I got here, Kelly Bowman helped me with everything I learned,âÄù Hartmann said. âÄúIf you have someone whoâÄôs been in the same position as you were in, they can translate what the coaches are trying to say. Kelly did that with me, and now I take pride in being to help Alex out. I think sheâÄôs going to make a big impact on this team.âÄù Hartmann and Blatt share one specific experience with the training technique, as both have had to work on hand placement. Blatt described getting her arms taped so that her elbows canâÄôt extend past 90 degrees, forcing her to receive the ball closer to her forehead than she was used to. âÄúI guess it helps with my release,âÄù Blatt said. âÄúRachel had to do it too, was the first person to go through that, and so sheâÄôs talked me through her experience with it.âÄù Hartmann remembered having to go through the same thing her freshman year. âÄúI remember getting taped up and thinking, âÄòIs this really going to help me?âÄô âÄù she said. âÄúSo I tried to encourage her and support her through that, and let her know that yes, it will work.âÄù The present and the future of the position seems to be in good shape for the Gophers, and so is the relationship between the two setters, despite having to square off against each other, playing on opposite sides of the net each day in practice. âÄúWe never get to be on the same team, so thatâÄôs kind of sad,âÄù Hartmann said. âÄúBut we like to joke around. I like to give her a hard time about some things. ItâÄôs like that with the whole team.âÄù