Officials suspect that a increase in the number of students living on campus contributed to the shift. 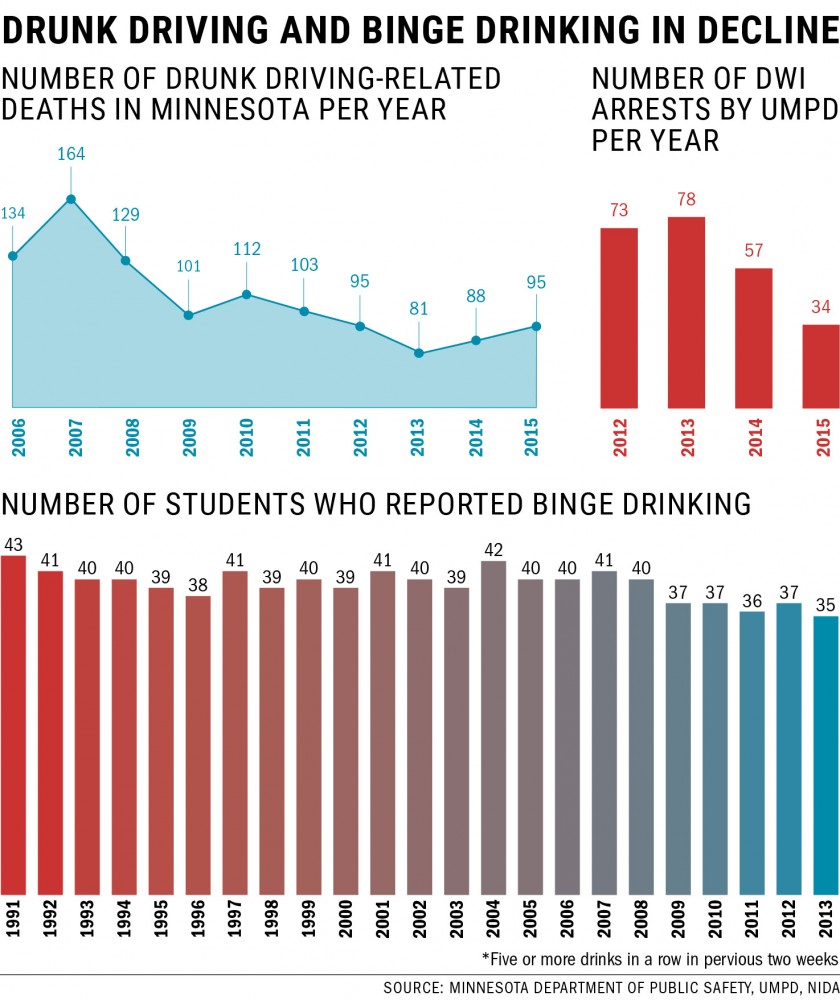 Minnesotans, it seems, are making wiser choices when it comes to driving under the influence.

According to the Minnesota Department of Public Safety, DWI arrests have declined by 40 percent since 2006. Efforts to curb drunk driving at the University of Minnesota have had similarly positive effects.

The University of Minnesota Police Department made 57 DWI arrests in 2014, according to UMPD data. That number dropped by over 40 percent to only 34 DWI arrests last year.

“[Avoiding driving drunk] is one of those things that people can generally agree on when it comes to alcohol use,” said Dave Golden, Public Health and Communications Director at Boynton Health. “There’s been a lot of campaigns on this issue, and the law is much stricter.”

Golden said the rise in the amount of University housing options has decreased the number of students who drive around campus. He believes this might have had an impact on lowering the amount of DWI arrests.

For students that have been arrested for drinking and driving, the DWI and Alcohol Awareness Class at Boynton usually qualifies for probationary requirements, Golden said. The class discusses the effects of alcohol and the impact of alcohol abuse.

“[The class] is a good time to go through screening to see if there’s other more serious issues related to alcohol,” he said. “For some folks, it’s a bad decision and bad outcome.”

Last year, about 34 percent of students aged 18 to 24 engaged in high-risk drinking, according to a Boynton Health Services survey.

“This [University] is a tough school for students,” Golden said. “But students who go here have the proven ability to be successful. Usually when people have trouble, it’s stuff like this. It’s not the rigor, it’s the thing associated with life, like high-risk drinking or physical conditions and mental health.”

But getting students involved in treatment programs and raising awareness about drunk driving can help curb issues before they occur, said University spokesman Tim Busse.

“This is the result of some really good public awareness campaigns,” he said. “It shows why we have so few student DWIs on campus because it’s known to be doing something.”

Taking a page from the state

The University has seen its drunk driving numbers decline in similar fashion to the state as a whole.

Still, enforcement and educational efforts are not a perfect solution; drunk driving deaths increased in 2015, from 88 to 95, compared to the year before.

Berger said by continuing to use education and enforcement campaigns to highlight the dangers of drunk driving, people will continue to become more aware of the issue.

Repeated offenses for DWIs are also less frequent, as more than 50 percent of DWI arrests in 2015 were first-time offenders.

“I believe people drive drunk many times before they get caught,” Berger said. “Each time that they do it, it kind of enforces in their mind that it’s OK. The problem is people make that choice after they’ve been drinking, so they’re not clearheaded when they’re making the choice to drive.”

Still, 60 percent of first-time offenders do not receive another DWI, she said.

“What happens with drunk driving is it tends to be a steady percentage of overall traffic deaths,” Berger said. “Traffic deaths, themselves, increased in 2015 … 23 percent of those deaths were drunk driving-related.”