The Hennepin Energy Recovery Center is seeking to lessen restrictions and increase burning by 200 tons per day. 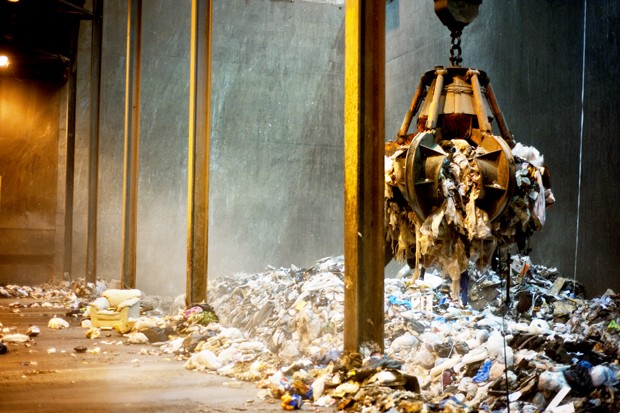 A crane carries trash into an incinerator at the Hennepin Energy Recovery Center on Monday. The center wants the city to allow them to increase burning by 200 tons per day.

A garbage burning facility located in downtown Minneapolis near the new Twins baseball stadium is looking to increase the amount of trash burned daily âÄî a proposal that has some locals concerned. The Hennepin Energy Recovery Center is looking to amend their existing conditional use permit to be allowed to burn about 200 more tons of garbage a day. The city mandates that the maximum allowed now is 1,000 tons. This could amount to a 20 percent increase âÄî or 77,000 more tons a year âÄî effective next summer. However, John Sigmond, business manager for Covanta Hennepin Energy who operates the plant, said their current 1,000 ton maximum is actually a restriction put on the facility about 20-years ago. The restriction keeps the facility from burning at the level it was designed to: 1,200 tons per day, he said. If the amendment is approved, Sigmond said the HERC facility, which sells its power to Xcel Energy, will be able to pump almost 3 million more pounds of steam energy into downtown. The facility converts 365,000 tons of garbage a year into electricity, enough to power 25,000 homes, according to the countyâÄôs website. Sigmond also said that they are well within the emissions standards set by the Minnesota Pollution Control Agency. âÄúIf waste heads to a landfill it just sits there,âÄù he said. âÄúThis way the garbage is being transformed into something useful.âÄù Part of the steam energy will flow into Target Field, the new Minnesota Twins ballpark next door, providing heat for the service level, Dan Kenney, executive director of the Minnesota Ballpark Authority, said. Kenney said he isnâÄôt worried about the impact burning more garbage will have on Twins fans when the ballpark opens in April 2010. An environmental impact study, done by Hennepin County, found that emissions wouldnâÄôt affect air quality for visitors of the stadium. âÄúMost of the truck work that happens is very early in the day and a lot of this extra tonnage will come in late in the year which is actually after the baseball season,âÄù Kenney said. âÄúThis move will update a 20-year-old facility to improve the new ballpark and the rail facility. We think itâÄôs a good time to do both.âÄù Kenney also noted that Hennepin County approved about $2 million in spending last month to make improvements to the facilityâÄôs exterior, which will include building a new entry door for trucks away from fans that will be air locked to prevent leaking odors. But there are citizens who feel burning more garbage will create more pollutants in the air. Leslie Davis, a local environmental activist, said burning more garbage will only increase the levels of dangerous contaminants, such as mercury and dioxin, into densely populated downtown. âÄúThey are already poisoning downtown Minneapolis,âÄù Davis said. âÄúThey say that because they are within these arbitrarily-established limits provided by the feds and the state that they can increase their emission, but âÄ¦ thatâÄôs completely irresponsible. There is no safe level for these contaminants.âÄù Julian Marshall, an assistant professor in the University of MinnesotaâÄôs department of civil engineering, studied emissions from point source, or industrial facilities, and said that their pollution impact is generally more âÄúmodestâÄù that people think. âÄúThe pollution impact of cars and trucks are oftentimes worse than these facilities because they are closer to us,âÄù he said. âÄúBut itâÄôs common to look at these large facilities and think they are heavy polluters.âÄù However, Marshall noted that burning about 200 tons more per day is a significant increase, and most industrial facilities are not located in a dense urban area. A Monday meeting with the cityâÄôs planning commission postponed a decision on the matter until June 22. City officials said they want took look further into the environmental and health impacts of the burner before making a decision. If the city approves the amendment, the Minnesota Pollution Control Agency would have to analyze and then modify the facilityâÄôs air quality permit, a process that could roll into next year.