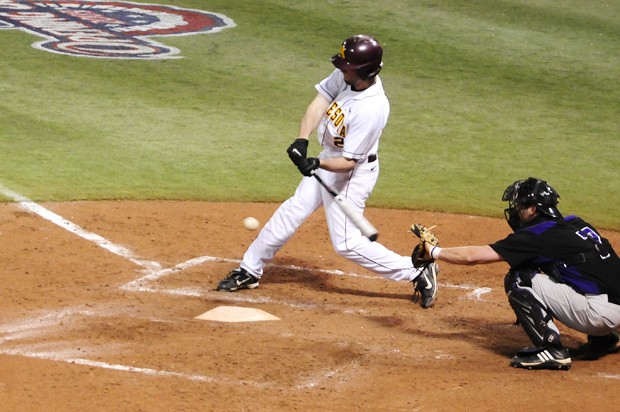 The Minnesota baseball team looks to stay in the hunt for a Big Ten regular season conference championship when it hosts Iowa at Siebert Field this weekend for its final home series of the year. The Gophers and Hawkeyes square off tonight at 6:35 p.m., Saturday at 2:05 p.m. and Sunday at 1:05 p.m. Minnesota (27-13 overall, 10-4 Big Ten) lurks, along with Indiana, just a half game back of Ohio State and Illinois in the Big Ten standings. Earlier this season, the Gophers took 2-of-3 from the Buckeyes but fell in a road series to the Illini. Meanwhile, Iowa (14-27, 3-11) is the conference basement dweller and has yet to win a Big Ten series. A week ago, Minnesota swept Purdue thanks largely to commanding pitching performances from its three starters. The Gophers will trot out the same rotation once again to try to silence the HawkeyesâÄô bats. Senior Chauncy Handran brings his 6-2 record and 3.36 ERA to the mound tonight, followed by fellow senior and reigning Big Ten Pitcher of the Week Tom Buske, who is coming off last SaturdayâÄôs 8 2/3 inning gem, and sophomore Seth Rosin, who had a career day of his own last weekend when he struck out eight in 5 innings. Junior catcher Kyle Knudson will likely be kept busy against an Iowa team second in the conference in stolen bases with 61. Yet Knudson should be up to the task; heâÄôs thrown out 21-of-49 runners this year, tops in the Big Ten. But the Gophers most recent memory is not sweeping Purdue. Instead, Minnesota must bounce back from a surprising 6-3 midweek loss to Division III St. Thomas on Tuesday. Midweek games have troubled the Gophers all season, but that has yet to translate to difficulties in weekend series. SundayâÄôs game is also Senior Day. Buske, Handran, Matt Nohelty, Jon Hummel and Tyler Oakes will be honored following the game.