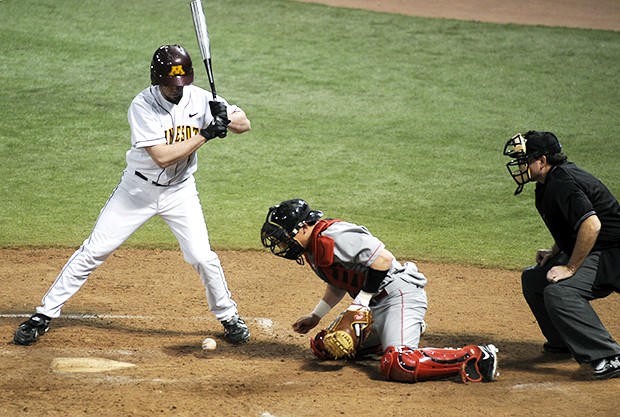 Minnesota second baseman, junior Dereck McCallum, watches a ball in the dirt during one of the Gophers’ three wins over the weekend at the Dome. JESSICA JANOSKI, DAILY

Behind a trio of rock-solid starting pitching performances, the Minnesota baseball team strung together its second 3-0 weekend in as many weeks at the aptly named Metrodome tournament. The Gophers opened the weekend with a 16-3 drubbing of Illinois State on Friday and followed it with impressive wins of 7-1 against Western Michigan on Saturday night and 7-2 against South Dakota State on Sunday afternoon. In 21 innings of work, MinnesotaâÄôs starters allowed just three earned runs and walked one batter. On the weekend, the GophersâÄô pitching staff issued a mere two free passes. âÄúIf you donâÄôt bring extra people to the plate because you walk people, you force people to string together a bunch of hits and the percentages are against them,âÄù head coach John Anderson said. âÄúEspecially if you can play defense like it looks like we can.âÄù Minnesota committed a pair of errors, but only one of those led to a run. Plus, the runs it saved with airtight defense easily outnumbered those it forfeited, especially on Sunday. One instance was a heads-up double play in the top of the fourth sparked by catcher Kyle Knudson on a failed squeeze attempt by South Dakota StateâÄôs Stephen Turner. Knudson chased down Scott Hood and tagged him out near third, then rifled the ball to second to catch Turner trying to sneak an extra base. Then in the seventh, freshman reliever Austin Lubinsky replaced starter Seth Rosin and almost immediately found himself in a no-outs, bases-loaded jam. But heâÄôd force a shallow fly ball to center fielder Eric Decker, a ground ball on which the Gophers nearly turned two and a groundout to third to escape the inning with minimal damage âÄî a lone run. âÄúWe played ourselves out of two potentially big innings,âÄù Anderson said after the game. But ultimately, the weekend belonged to the starting pitchers. Senior right-hander Chauncy Handran set the tone with seven innings of four-hit, two earned run ball on Friday. It was the longest outing of his career but required a mere 75 pitches. Not to be outdone, senior Tom Buske didnâÄôt allow an earned run and gave up just three hits in his eight innings of work Saturday. South Dakota State scattered eight hits Sunday against Rosin, but he made it through six innings and gave up only one run. âÄúItâÄôs a confidence booster for the guys on the field knowing that theyâÄôre going to throw strikes and strike guys out,âÄù Decker said. Junior second baseman Derek McCallum added that pitchers and defenses feed off of one another. When pitchers deliver a dominant, efficient outing, the defense usually does the same. âÄúIf the pitcher is working fast itâÄôs easy to play defense behind him,âÄù McCallum said. âÄúIf we make a great play for our pitcher they usually pick us up too. âÄúItâÄôs going real well back and forth between defense and pitching so far.âÄù