More than 90 Chinese students were paired with American host families to learn the meaning of Thanksgiving. 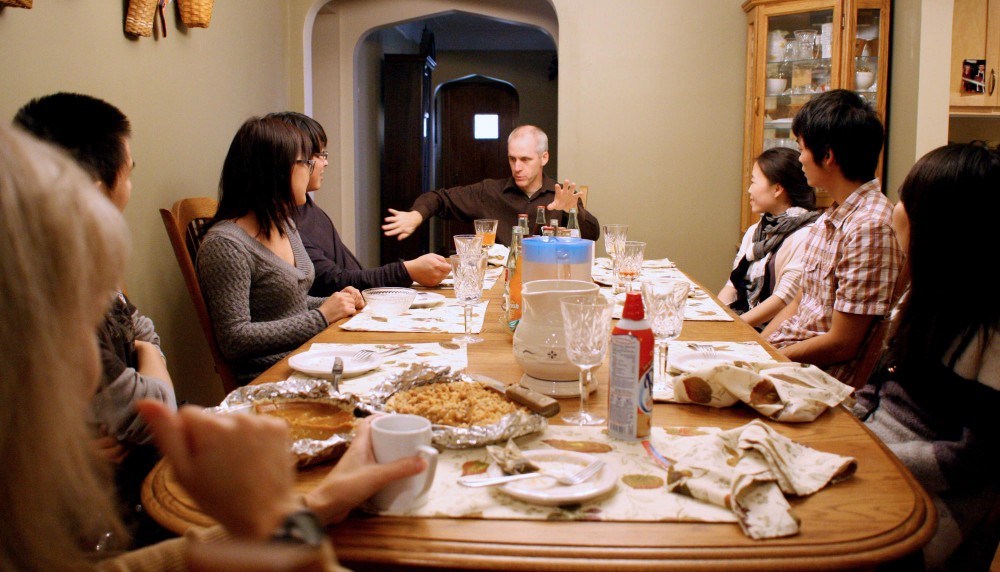 Host father Mark Hunt talks with Chinese exchange students at an early Thanksgiving dinner Sunday at the Hunts' home in Minneapolis. China Outreach Ministries organized an event for host families and students to talk about the meaning of Thanksgiving.

With turkey, pumpkin pie, ice cream and a salad on the table Sunday afternoon, Xiulan Li said she knew this yearâÄôs Thanksgiving meal would make her feel at home.

Li, a research assistant in the College of Food, Agricultural and Natural Resource Sciences at the University of Minnesota, remembered her first Thanksgiving in the U.S. in 2009, when she enjoyed delicious Thanksgiving food surrounded by her American host family.

China Outreach Ministries for the Twin Cities, a Christian organization, invited Chinese students to have a meal with American host families on Sunday and learn the meaning of Thanksgiving.

Ninety-three Chinese students were paired with 46 American host family members by COM for the day. Chinese students had a meal in their host familiesâÄô homes and attended a program at Bethlehem Baptist Church to learn the historical origin, traditional foods and meaning behind the holiday.

Glenn Kenadjian, the Twin Cities director of COM, said the goal of the event was to show love and care for Chinese students and scholars and to provide them an opportunity to explore Christianity.

âÄúWe let people know that all the hosts are from church,âÄù Kenadjian said. âÄúAnd so we would hope that they get exposed to this positive thing, but if they want to seek [more information] about this Christianity thing, we would be ready to talk to them about that.âÄù

For both American host families and Chinese students, the program is an opportunity to learn each otherâÄôs culture, see the world from different views and build relationships.

Bob Kraftson, a volunteer coordinator at COM who matched Chinese students to host families, said the program provides Chinese students with a cross-cultural experience, sparks their interests in Christianity and provides a platform to learn about the religion.

Julie Hunt, a volunteer for COM, invited six Chinese students to enjoy the Thanksgiving meal in her home this year. She said it was a âÄúblessingâÄù to meet them.

Zhanren Li, a first-year doctoral candidate student in chemical engineering, said the program gave him a chance to learn about Christianity, American culture and food.

For many of the students, itâÄôs also an opportunity to share their culture.

After the church program, Li said he taught his host family how to cook some Chinese dumplings that they had bought.

COM also helps new Chinese students when they first arrive in the U.S. with airport pick-up and temporary housing.

Xiulan Li has known her host family for almost three years since she first came to Minneapolis in 2009. She said she still remembers the week she spent with her host family âÄî the Hunts.

Julie Hunt and her family helped her set up a TCF banking account, telephone cards and even found her an apartment.

Kraftson said that he gets incoming Chinese studentsâÄô email addresses from the Friendship Association of Chinese Students and Scholars. Then, COM contacts the students.

Kenadjian, who visited China in 1996, said he hoped host families and Chinese students could develop a long-term relationship and on-going friendship âÄî just like the song performed during the program Sunday:

Straight from the heart,

Pulls us all together,

All once we learn to speak it

All the world will hear

Love in any language